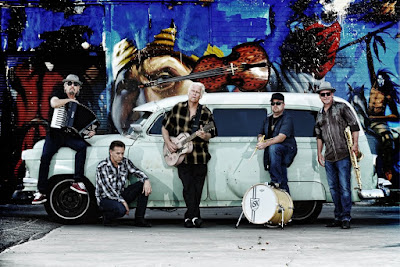 It’s been a little like Christmas around the Juke Joint with a lot of great music coming in from far and wide. Some from well known artists, others from locally known artists, and some who aren’t known at all. I make no distinction. I just reach into the large pile on my desk and pull out a random CD.
Today’s entry is from a group I don’t know, Vegas Strip Kings who released an album appropriately called Jackpot! I was afraid to roll the dice in case I got snake eyes, but instead, I dropped a seven and then an eleven and cleaned up. Jackpot indeed!
The band consists of Al Ek on electric, acoustic, and lap steel guitars; harmonicas, and lead vocals; Jimmy Carpenter on saxophone and lead vocals; Justin Truitt on drums and percussion; Billy Truitt on keyboards accordions, lead and backup vocals; and Rob Edwards on upright bass.
I can’t tell you a whole lot about the band just yet, but one thing I can tell you is these guys rock!
Rotgut Run starts the album off with some great dogbone bass and sweet sax. It straddles the best of Rockabilly and the Blues – would that be “Bluesabilly?”. The subject matter is near and dear to my heart – moonshine, as I had more than one relative who made their living doing just that back in the hills and hollars of my home town. If this song doesn’t hook you, well, better check your pulse. I’m a fan after one song.
The next song, It Ain’t, has already made an appearance on Time For The Blues. It’s a swinging, jumping number with a tempo turned up to eleven. Love this song and just may have to play it again soon.
A song with the intriguing title of Jesus On The Dash follows. The accordion gives it a Louisiana/Caribbean feel. It strays a little from the blues, but it’s still a cool song and if you don’t mind a little Cajun spice with your music, you’ll have a good time.
They slow things down a little for Lately. It’s a “I meant to do something” apology song that so many have sung versions of late at night. This time it’s delivered with a big old twist and the keyboards-sax-guitar combination gives it that perfect late night feel.
It’s zydeco party time with the next song, Screeching Halt. Whenever I hear that saucy accordion on a song, that’s generally my first reaction. The percussion is solid on this one and it gives the song a stronger backbone. Fun, although it doesn’t quite fit the format I generally play.
No, it’s not the song by the Eagles. Take It Easy is a wild number with the lead vocals being delivered through some distortion at first. The boogie style piano is killer and the sax answers with a very cool break. Yeah, this one is fun and straight up rocks.
More accordion on Back To You. There is also some sweet pedal steel and the song is certainly a lot of fun. The Vegas Strip Kings love these high energy songs and having done a few late night shows in Sin City myself, I know you have to get the crowd’s attention and keep them awake. Maybe that’s their secret here because there’s no way to nod off during this album.
The pounding of machine on asphalt powers V8 Ford. Originally done as a piano blues number by Willie Love, the band infuses the song with some old school touches and some sweet horn over a tight bass. They also do an accordion break at one point giving it a more unusual sound, when they easily could have gone with harp or piano. Fascinating interpretation.
Hold On features a funky beat, a little something different than the previous songs. It’s a fun party song, and will probably get most people up and on the dance floor. After that, it’s more funk and more accordion on Pawnbroker. Again it’s fun and their musicianship is tops, but I’m kind of wanting to hear more blues. That’s just me, though.
Ask and ye shall receive as Life Of Me is a country-infused blues song. A little heavier on the country than the blues, but not so out of proportion that it won’t satisfy the blues lovers. The follow up with the longest song on the album, Same Thing, which clocks in at just under 7:00. It’s a slow blues number that gets under your skin and utilizes more than a few blues tropes. Very good, and very effective.
The close the album with Sharp As A Razor, more Bluesabilly like the opening song. It’s loud, raucous and one of my favorite songs on the album. Great way to end things and to make us want to come back for more – lots more.
I wish I could point you to more albums from Vegas Strip Kings, but from all indications, this is their first album. The maturity of the performances tells me that these are not newcomers to the music, but long time practitioners. We’ve played one or two of their songs, and I give the album high marks.
When the VSK release their next album, I’m sure that we’ll be doing a feature on them. In the meantime, grab a copy of their album, Jackpot!