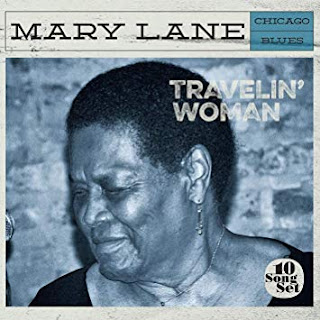 Don’t feel too bad if the name Mary Lane doesn’t ring any bells. Lane is one of the great generation of blues artists who moved from the South to Chicago, bringing with them their takes on that Delta sound that gave birth to the blues. Unlike many of these artists, Lane stayed put in Chicago, appearing all over town and in local festivals, and at 83 years young, she’s only now recording her second release.
Prior to her new release, Travelin’ Woman, on the Women Of The Blues label, Lane last recorded two decades ago. With this ten-song disc, Lane shows that she’s one of the greats, and I, for one, am sorry for all of the albums that might have enhanced the genre for all these years.
Since I started grading albums several years back, something that I use to determine the Best Of selections for each year, only one other artist has scored as high as I graded Lane on this album. For the record, her score was 3.7 out of 4.0 (same grade scale as most colleges) which would make it damn near perfect.
Starting out with the title track, Travelin’ Woman, Lane establishes that she is the real deal mixing her spirited vocals with the slide guitar of Louie Zagoras and the Hammond B-3 of Chris “Hambone” Cameron. This take sounds like it was recorded straight of the bandstand, all it needs is the crowd noise of enthusiastic fans. I love when she takes a step back and tells the band, “Somebody play some blues.” If they play more blues like this, I will be a fan for life!
Cameron’s piano leads us into Ain’t Gonna Cry No More. Another great pure blues number dealing with a simple theme and solid backing music. Lane even has Eddie Shaw playing a little harp for the song. Lane gets saucy and the guitar of Jim Tullio answers in kind. Very sweet.
Next up is a rocking song, Leave That Wine Alone. It can’t be a real blues set unless there’s at least one song about drinking, right? Well, this is that song and you’re going to find your head bopping and your toes tapping to go along with it. Of the first three songs I’ve heard, I would like to play all three on Time For The Blues. If this keeps up, I’m going to have to play most – if not all – of her songs.
Lane follows up with another great song, Some People Say I’m Crazy. This is pure blues with strong percussion, piercing harp, and some wicked piano. Lane herself tears up the vocals and you better believe this one will be getting some airplay. Mary Lane, where have you been all my life?
The fifth track, Raining In My Heart, is a cool shuffle that lets Lane croon a while. She keeps her vocals toned down to a relative purr and lets the guitar take a little more of the spotlight.
Lane takes us to church with the gospel tinged Let Me Into Your Heart. Her vocals are pure emotional and the background voices for a perfect choir. Cameron’s keys ring and the bass takes a stronger place in the band. Sweet number.
After church, it’s time to party hard with the next track, Ain’t Nobody Else. Lane rocks and rolls with the best of them and shows that a soul does not age. Billy Branch lays down some solid harp and Travis Bernard’s drums set a quick pace. Another winner for Ms. Lane!
Lane adds a little funk to her blues with Blues Give Me A Feeling. Indiara Sfair adds some great harp work and Lane throws herself into the vocals with a great deal of gusto.
Land and the band are back to swinging Chicago style with Bad Luck And Trouble. There’s a title that describes most of my life choices. The song has a good shuffle beat and deals with some normal blues topics. She just delivers them in such a way that you can’t resist getting up and dancing a little bit.
She ends with a fascinating song, Make Up Your Mind. It’s Lane on vocals and Colin Linden on the acoustic slide dobro and is the most Delta sounding song on the album. It’s a plaintive number that breaks your heart and would be beautiful on the front porch or in front of 10,000 people.
Mary Lane brings the past of blues to life, but doesn’t deliver a museum piece. Every song is alive, crackling with energy, using the lightning that is her voice to deliver one powerful song after another. She may not have recorded for 20 years, but I pray to whatever forces that control the universe, that she records as much as she can for as long as she wants to.
Travelin’ Woman is a treasure and should grace every blues lover’s collection. Lane does not seem to have a dedicated website, but you can find out more about her at the website for the documentary about her, I Can Only Be Mary Lane. The nearly hour-long documentary by Jesseca Ynez Simmons tells the story of her life and the efforts it took to create this album. While I have not seen it myself, I am looking forward to doing so at my first opportunity.
God bless Mary Lane and all of her work. I do not say such things lightly. I think she is one of the people who connect our past and present with our future. Do yourself a favor and check her out as fast as you can.