Jon Gindick ~~ Love At The All Night Café 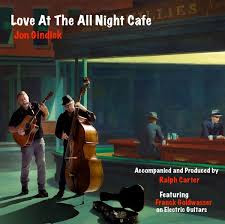 I first heard Jon Gindick on his previous album, When We Die, We All Come Back As Music, but I had known his writing for many years. Like many other beginning harp players, I stumbled onto one of his instruction books on how to play the harmonica, and almost immediately, my playing improved to the point where my family no longer threw things at me when I practiced.
I used several of his books to cover the basics and then started taking other lessons, always trying to get better. I sort of plateaued, but can still work my way through a few easy tunes.
Anyway, I digress. Gindick is back with a brand new independent release, Love At The All Night Café. Inspired by the great American artist Edward Hopper’s well known painting, Nighthawks, Gindick and three other musicians have recorded 12 songs that range from toe-tapping lightness, to cry in your beer sentimentality. All of the songs are written by Gindick who also plays harp, guitars, and sings lead.
He is joined by Ralph Carter on bass keyboards, percussion, classical guitar, cigar box guitar and background vocals; Franck Goldwasser on electric and acoustic guitars, and Pete Gallagher on drums and background vocals. Carter also handled all the production and recording aspects.
Gindick opens the album with some great wailing harp on I Was Born To Wail. His opening salvo is so long that I lost my breath listening to it. It’s the story of some of the great harp masters of the post-World War II, the artists that influenced him to play the harp. I love the song, and you know you’ll be hearing it on Time For The Blues.
He gets sentimental on the next song, Feeling Her Gone. It’s a nice ballad and he gets a little emotional in his delivery. His harp playing is exquisite, he breaths so much life into each note he plays. While his name may not come up as much as some other performers, Gindick deserves a ton of respect.
He takes traditional blues and squeezes a little rock into it for Baby’s Got The Blues. This is one that just about every blues fan is going to like, especially those of us who are particularly attached to the harp. Another great one for airplay.
Gindick follows up with the de facto title track, The All Night Café. The painting that inspired the cover, Edward Hopper’s Nighthawks, is one of my favorite painting, and I think the artwork is a great homage, putting two members of the band busking outside of the diner. It starts out jazzy, kind of a bossa nova flavor and Gindick’s harp takes on a life of its own. Gindick’s lyrics are story like, poetic, and dreamlike. Might not be everyone’s cup of espresso, but the next time I put together a jazz program, this one’s going in.
He follows up with a swinging blues number, Load Me Up Baby. A straight ahead shuffle that blends his vocals and harp into a call and response technique for the most part. As Gindick is performing both parts, he has to keep his energy up to make it all flow and he does it successfully. Gindick is not only technically a good player, but his harp exudes passion.
Next up is a sweet languid number, Mississippi Moods, that slows down the pace to match that of a sleepy summer day. I’ve listened to some of Gindick’s work, not nearly enough, and I’ve never found his lyrics to be at this level before. We’re half way through the album, and I am impressed by the entire package!
I think every married man has heard the phrase Happy Wife, Happy Life, Happy Home, and guys, take it to heart. This is a fun uptempo track with a great shuffle beat. I wasn’t going to play this one on the show, but since my wife heard it, well, it’s coming up soon! Thank you, honey…
After the light hearted previous song, Gindick gets serious with The Song I Couldn’t Write. This one walks on the edge of old school country and blues. It’s soft and plaintive and tugs at your heart for all it’s worth. Sweet and sentimental.
Gendick’s at his saucy best with I Love The Feminine Girl. The longest song on the album is also the wickedest. Clever and has to be a killer when perform it live. Hope I get the chance to see it for myself soon.
The guys slow things down on Hand Holding Man. Gindick croons a ballad about as well as anyone in the business, and he manages to create some vivid images just by listening to his interpretations.
A little bit of that bossa nova beat returns on Can’t Get That Girl Off My Mind. I’ve always had a soft place in my heart for that cool Brazilian jazz, and this one is no different. But listen to the harp, Gindick makes it sound so cool. Really nice, but a little off the beaten blues track. Kick back and enjoy.
He ends the album with one more ballad, In The Land Of You. Gindick gets into crooner mode as he brings things to a close. He’s creating a memory for us to share and in doing so, paints one last picture for us to take with us.
Jon Gindick is a great harp player and a solid vocalist. This is best I’ve heard his lyrics and the delivery of them. Love At The All Night Café is a strong solid effort that I enjoyed greatly. True, I always have a soft spot for harp work, but I can also be very critical when it’s played badly.
Fortunately for us, Gindick is a master.