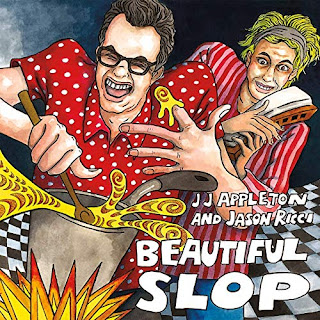 Way back in 2015, guitarist-singer-songwriter JJ Appleton teamed up with punk-rock blues harpist Jason Ricci for the album Dirty Memory. I managed to snag a copy a couple of years later at one of Ricci’s shows and I was immediately impressed by this acoustic gem.
I wasn’t very familiar with Appleton at that time, but I was getting to know Ricci fairly well. Ricci, a two-time instrumentalist of the year for the harmonica, is well known for his darkly flamboyant style to match his multi-colored hair. Sometimes though, Ricci is better known for his style and we tend to forget just how good of a harp player he is.
On his follow up record with Appleton, Beautiful Slop, the two have once again gone to their acoustic roots, and delivered a fun album that plays ten tracks of acoustic Piedmont style blues. They are joined by Derek Nievergelt on acoustic bass and no other musicians are credited.
Both Appleton and Ricci write several songs with Appleton writing four and Ricci penning three.
Ricci is out on the road again with his band, The Bad Kind, playing their lively brand of swamp rock blues. Catch them where you can, from all reports from my friends along the tour route, he is burning up the stages wherever he plays.
Appleton has some fun with his Resonator on the opening song, Don’t Take Advantage Of Me. Ricci adds some old school harp and Nievergelt’s bass ties it all together. Radio producers and parents beware, there is a GD expletive that shouldn’t affect too many folks. The FCC may frown on its use, but it certainly fits the lyrics of the song.
They follow up with Ricci’s Hurt Myself, a slow emotional number that screams from the pain that Ricci was in as he wrote this song. If you remember John Lennon’s scream therapy songs, this is along that same vein. Ricci is raw, untamed, seething from the pain. The acoustic rendering of the song makes the pain even more palpable. Damn, this song is amazing, but not for the faint of heart.
Appleton wrote the next track, I Got The Feeling. It’s a peppy, happy song a much lighter touch than the previous song. This is some sweet front porch music that should make just about every blues fan happy. It should receive a good share of airplay, especially on the acoustic shows.
The guys perform another Appleton song, Distraction, which is a little darker than the previous number. It’s still quiet but the lower register adds another layer to the song. Ricci’s harp swings in and out like a bird in flight. When Appleton slips into his head voice, the song becomes somewhat ethereal. An interesting song that I’m going to have to think about for a while.
The next two songs are by Ricci. After the raw nerve of Hurt Myself, I’m not sure what to expect. The first, Geaux Nuts Kids, is an old school New Orleans instrumental that should make just about anyone get out of their chair and head towards the dance floor. It will wake you up and get you going.
The second, Don’t Badger The Witness, makes more great use of Ricci’s harp playing on this slow number delivered with a faux New Orleans accent. Ricci trades off with Appleton and the two drop a song that has little in the way of lyrics, but you can feel the frustration in every line. Good one.
Appleton takes over the vocals on Standing In The Safety Zone, and drops another peppy upbeat song. As I mentioned earlier, it’s a great front porch song that sounds at home in front of a crowd of 10,000. It’s a Piedmont style blues number that really sounds sweet.
The next two songs are written by Appleton. The first is Brighter Days, a slower darker number. It’s got an edge to it and Ricci’s harp sharpens it into a razor sharp blade. The second, For The Very Last Time, let’s Appleton cut loose and Ricci turns his harp into a staccato machine gun. It’s a bit of a rocker and when Ricci takes his break, it’s hard to fathom someone playing so fast and so controlled. Pretty good tune for my money!
They close the album with Stay. The bass leads them in and Appleton’s vocals take over with a determined croon. Ricci’s harp is distant, an observer setting the mood with a few jazzy riffs. A very interesting choice to bring this energetic album to its end.
JJ Appleton and Jason Ricci are two great artists, and it’s fascinating to me to watch Ricci eschew his normal harmonica pyrotechnics in order to serve the world of each acoustic song. The Blues started out that way; little or no instrumentation, just playing loud enough to catch the attention of a raucous crowd.
Beautiful Slop has taken a lot of ingredients: good songs, strong lyrics, good guitar, excellent harmonica playing, a strong bass, and have thrown them into the stew pot. That’s how the make Jambalaya in Louisiana, and Mulligan Stew by hobos on the road. Apparently, that’s how they made this tasty album as well. Add it to your collection and enjoy the deliciousness.