Diana Rein ~~ Queen Of My Castle 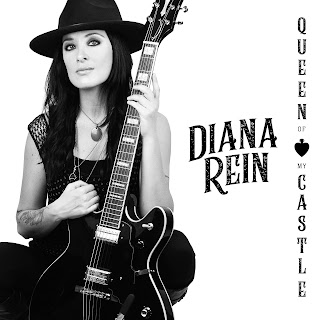 You’ve got to hand it to Mike Zito and Guy Hale, the founders of Gulf Coast Records. They have started their new venture with several great performers to launch the company. They’ve started with Albert Castiglia, Billy Price, Tony Campanella, and have now added Diana Rein.
I first encountered Rein on her second album, Long Road. I enjoyed it, and thought she was an outstanding guitarist and a very strong vocalist. She has added drummer Michael Leasure as producer and he has taken her music in a different direction. Aside from Rein on guitars and vocals and Leasure on drums, they are joined by Dave Osti on bass and Drake Munkihaid Shining on keys.
Background vocals include Rein, Steve Polacek, Vaughn Polacek, Lincoln Clapp, Melissa Bonning, Julia Clapp, and Mackenzie Clapp.
Right off the bat, Rein is preaching the blues with Yes, I Sing The Blues. Her voice is every bit as good as I remember it and her backing band gets dirty and gritty right away. Some good guitar work makes it stand out. This is one I will definitely be playing on Time For The Blues, sooner than later!
Track number two is The Midnight Line; some funk aided by slashing guitar. This is a solid blues rock song and if you like your blues on the rock side, you will enjoy this one a lot. I could see this song getting its share of airplay. Mark my words…
Next up is the title track, Queen Of My Castle. Damn, this is a good rocking blues song. Rein puts her feelings out on the line and adds her voice to the ever enlarging circle of empowered women. Listen to the song and take it to heart. Another definite for the show, and I’m already planning when we can produce it.
The next track, I Can’t Quit You, rocks well and has a ballad sentiment. It’s a softer song than others up till now. It’s a nice change and shows that Rein can deliver on different styles. To anyone who has listened to either of her previous albums, this is not news. For newcomers, it just adds a new dimension to her artistry.
One Foot In has some soaring guitar pyrotechnics. As a guitarist, Rein is underrated. She plays with her own style and has taken Stevie Ray Vaughan’s technique as her starting point. Listen to the strength with which she hits her notes. She is really coming into her own with this album.
Walking Along follows with a sweet lead guitar and the rhythm section puts together a deep pocket. This one has a cool Chicago sound (just minus the horns, which I would have love to have heard) and I could see this one inspiring audience members to get out of their seats.
Pure Soul follows and is as funky as the name suggests. It’s a good song, although I doubt I will find a spot for it on the show. Even so, I think it will end up on my personal playlist. Got a good beat and I think I’ll be cranking up the volume when I’m on the treadmill.
The next song, It’s You, follows. The song has a solid pulse and Rein weaves her voice around it. Rein has demonstrated several different styles, blues, funk, rock, and soft ballads on the album. She’s delivered songs that make you think and others that make you dance. This is one of the latter, so get moving and enjoy.
Next up is My Love, and no, it’s not the Paul McCartney song. It’s got a different sound to it, kind of a Texas shuffle, like it was part of the soundtrack to a Quentin Tarrantino or Robert Rodriguez film. The soaring parts are beautiful.
She changes the pace again with Get Down. It’s a dance song with a cool hook. I love to see artists mix genres in order to create their own sound. Rein brings in a new dimension to the styles and expands them.
Remember the old doo wop song, In The Still Of The Night by the Five Satins? Rein uses that to launch the next song, Chill Of The Night, crafting a beautiful homage to that sweet sound and allowing her sweet voice to soar high and to play off some great keyboard and guitar work. Easily one of my favorite songs on the album.
Rein gets funky with the next song, Worth. Her voice takes on a gritty purr that lands gently on the ears, but don’t let that fool you, there’s steel hidden in that velvet. Fun song with some very good lyrics.
There’s more rocking and strong guitar work in Time’s Ticking Away, listen as Rein’s voice moves in and out of edginess to great effect. At some points it’s almost a kittenish purr and just a few seconds later it hits like an ice knife.
Distorted guitars and a powerful drum bass combination gives Heat a bit of a metal sound. While Rein has flirted with this sound on a few previous cuts, here she lets her hair down and delivers it unapologetically.
She ends the album with a beautiful slow instrumental, Zoe. This gives her and her outstanding band members a chance to show off their pure musicianship one more time. It’s a lovely number that flows almost like a jazz quartet backing her guitar.
Diana Rein demonstrates on Queen Of My Castle that she is a mature force that is very adept in several styles of music. Make sure you get her on your radar now, because she has the potential for a long and distinguished career.
Diana Rein’s website 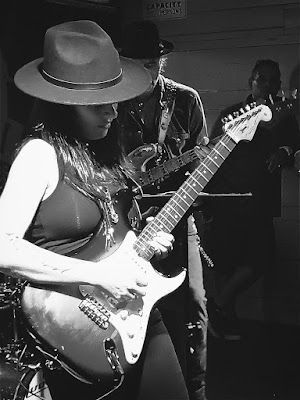 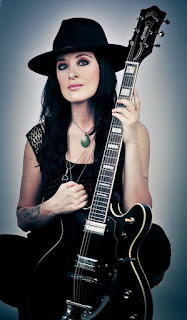