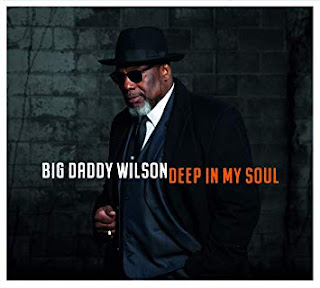 A North Carolina native now making his home in Europe, Big Daddy Wilson had one of the quintessential upbringings for a blues artist. Small town, raised by mom and grandmother, not much money, life revolved around school and church, sang in the Sunday choir, left school early and joined the Army.
Even with all that, Wilson didn’t discover the blues until he was stationed in Germany and saw his first blues show. That was his defining moment as he found something that he didn’t know his life was missing. Taking the path that other blues artists had paved for him, Wilson stayed in Germany, married, and began to make a name for himself in clubs and festivals throughout Europe.
He released several albums (listed below) and EPs and eventually came to the notice of the German-based label, Ruf, that is distributing his albums throughout the world. His latest, Deep In My Soul, is a very soulful blues album, and to make things even sweeter, he teams up with the guitarist Laura Chavez, who in my opinion is one of the best guitar slingers working today.
I always love horns and here Wilson uses them to intro the opening song, I Know. His voice is as smooth as honey and he cruises through the song with ease and some lovely backing vocals. Great pure soul number and it whets my appetite for more.
Is there anything more blues than a title like Ain’t Got No Money? I love this song and will most likely be playing it on Time For The Blues soon. The song has a throwback sound and it sounds great.
Wilson slows things down for Mississippi Me and breathes life and emotion into every note. The use of the piano is gorgeous and then moves into some gospel touches. Really like this song and will be listening to it for a long time.
He follows that up with the funky Tripping On You. The song reminds me of the classic soul music of the ‘70’s that I used to devour. It’s lighthearted and you can hear the smile on Wilson’s face. I Got Plenty starts off with some soulful country honkytonk. It’s a sweet, low key song and has some lyrics we should all take to heart.
It’s more soul on Hold On To Our Love, as Wilson straddles the line of blues and R&B. So far, he’s established that he has a great voice and is very comfortable letting it drive the record, not a lot of fancy pyro.
Next up is the title track, Deep In My Soul. The lyrics are strong and speak to what he faces as an artist creating his work. Wilson was a poet before becoming a singer, and here, his lyrics are poetic and cut right to the bone. Great song.
He follows that by teaming up with Chavez on I’m Walking. Great soulful blues with a funky beat. I can see this one getting the most airplay on our show, and any others around the globe. Damn, he’s got one expressive voice, and Chavez’ guitar answers him note for note.
He keeps the mood going, but slows down the tempo for Crazy World. Once again, Wilson’s voice is the star of the song, building the emotions of the story. The backing vocals are subtle and add a lot of color.
Wilson gets a little darker with Redhead Stepchild. He takes on a more forceful tone as he asserts himself in the relationship the song creates. Cool and a little menacing.
Speaking of darker, he gets very dark and very funky on Voodoo. The choppy guitar mixes with the keyboards to create a great background. Great production by Jim Gaines.
Wilson closes the album with Couldn’t Keep It To Myself, a traditional song that uses the same tune as Down By The Riverside, and other gospel tunes. It’s a nod back to his church roots and a sweet way to end the album.
Big Daddy Wilson is a fine soulful artist who brings an old school energy to his work. Deep In My Soul is a great place to start your appreciation of him, and let’s hope that he finds his way into more venues in our part of the world.