The Little Red Rooster Blues Band ~~ Lock Up The Liquor 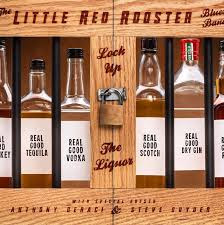 Can it really be 30 years since The Little Red Rooster Blues Band started making a name for themselves in their native Pennsylvania? They’ve been working hard since then, playing countless gigs and releasing several great albums.
Now, after a mere three decades, they have dropped a brand new all original release, Lock Up The Liquor. It contains 15 songs of fun and hard-driving blues that should satisfy any blues lover. For those who aren’t familiar with the group, they are comprised of Kevin McCann on guitar and vocals; Dave Holtzman on harmonica and vocals; Jeff Michael on bass; and Bob Holden on drums.
For this album, Anthony Geraci guests on piano for seven tracks and harp master Steve Guyger plays on one song.
The album starts off with the old fashioned title, Pitchin’ Woo. It’s a brave band that kicks off with an instrumental, showcasing how well everyone can actually play. I like it a lot and Holtzman and Geraci blend their instruments beautifully.
After that is the fun and funky Drinkin’ Wine On My Dime. This is blues with a smile that will light up a stage, and you know almost everyone in the audience is going to be pointing at their partner saying, “That’s you.”
The band then follows up with a country tinged Rather Be Lonesome. Great harp licks layered over Holden’s quick percussion gives the song an entirely different feel. It’s another fun tune and the harp work is outstanding. Next up is a tribute to the great James Cotton, Cotton Mouth. It features some of the best harp work on the album, and considering the others aren’t too shabby, that’s high praise for this instrumental. Okay, there’s a spoken introduction, but that’s only a couple of seconds. Just have a good time, the band obviously is…
They slow things down to ballad tempo on Ready For Goodbye. It’s got that Fats Domino feel from the late ‘50’s and the band pulls out all the stops to make it as lush as possible. All we need is a thin light on a mirror ball, holding our partner tight, and moving very slow to make this one complete.
They kick up the tempo considerably on Just A Distant Memory and give it a rocking feel. It’s one for the blues rock fans, but the vocals are good and the music is tight. Solid number and quick, one of only three that come in under three minutes.
Oh, now this one is truly funny. I mean, look at the title: Thrift Shop Rubbers. Okay, the sophomore in high school that still lives in my brain giggled all the way through this one, but believe me, it rocks! Can’t wait to see them do this one live. The payoff is great!
Next up is the longest song on the album, Nothin’ Left Between Us. Serious slow burn blues from first note to last. Great plaintive harp and the kind of lyrics that just cut to the bone. This one is pure emotion and a great song to listen to, although at about 7:30, I may not be able to squeeze it in to an episode of Time For The Blues, but I sure would like to.
They follow up with a swinging Oughta Be A Law. One thing about The Little Red Rooster Blues Band, they are able to mix the best of Chicago style blues with the best of West Coast blues and create a sound that can be hard edged on one number and the next just bounces.
Next up is a very cool number, Trouble In The Jungle, that mixes some very nice drums with some killer harp riffs. The vocals have a touch of menace in them, and it sounds like the band is having a great time on the song.
Hand claps bring in the next song, Six Strong Men, a song with some western and New Orleans flavor. It’s the story of one man who needs six strong pallbearers and it’s all delivered with a jaunty beat. Fun song and the piano has a great honkytonk sound. Things really get swinging on Livin’ At Jerry’s House, a jaunty instrumental that gives the band a chance to showcase their talents one more time.
With a title like 4 O’Clock In The Morning, you know this song is going to be low, slow, and dark. Very dark. It’s that kind of song where the singer just bares his soul to the audience and shows his vulnerability. Beautiful number.
Next up is another West Coast style swinging number, Can’t Believe She’s Mine. It moves you and will probably move an audience to get up and hit the dance floor. Fun times…
They close the album out with the title track, Lock Up The Liquor. That’s good advice kids, especially if any of my friends are stopping by. This is one of the hottest numbers on the album and will be definitely be on our playlist soon.
I haven’t found a website dedicated to The Little Red Rooster Blues Band, but they do have a Facebook presence, as well as a Reverb Nation page among others. You can find articles and other information about them there, but just take my word for it and score yourself a copy of Lock Up The Liquor, and for God’s sake, somebody let me know when they’re heading my way. I’ve got to see them live!

**UPDATE** The Little Red Rooster Blues Band has notified me that their little piece of the world wide web is www.littleredrooster.com  Make sure you check them out!