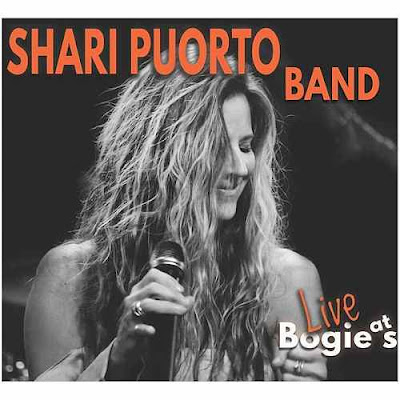 Shari Puorto’s most recent album, My Obsession, was a complete breath of fresh air. I loved her vocals, her band, and thought her songwriting was a notch or two above most of the performers I had been hearing. There was something in the way she delivered her songs that made me think she would be a helluva live performer.
Thanks to her newest album, Live At Bogies, my prediction has been verified. She IS a helluva live performer and this album documents that fact in no uncertain terms. Puorto is backed by John DePatie on guitar, Frank Scarpelli on bass, Mike Sauer on drums and background vocals, and Jon Greathouse on keys and background vocals.
She delivers several of her own songs as well as covers of material originally done by Randy Newman, Savoy Brown, Steve Winwood, and Candi Stanton.
The album kicks off in high fashion with It’s A Damn Shame. Puorto’s voice is just as powerful as ever and DePatie and Greathouse set the song up nicely and the rhythm section of Scarpelli and Sauer have a deep groove going. You can hear the audience’s energy on the opener, and I have a feeling that this is going to rock hard.
With barely a pause between songs, Puorto then launches into Home Of The Blues. I can’t wait to play this one on Time For The Blues, the real home of the blues. At least in our area. I love the way this one rocks and DePatie takes a great guitar break. Well written and performed with the highest energy.
Next up is another high energy number, Outta My Mind. I am pretty sure there was an edit prior to the song starting, but that’s not an issue when the song is this good. Puorto growls out her lyrics and her voice is in great shape. Listen for the keyboard break, nice honkytonk sound.
Randy Newman’s Guilty follows. She slows down the tempo and unleashes her soul to the audience. It’s a gorgeous cover and shows that she is not just a one dimensional performer. Damn, she’s got some pipes and doesn’t hold back one iota. Very nice song.
I remember Six Months Sober from My Obsession, and thought it was a clever song then. The live version adds a ton of energy and Greathouse has a lot of fun on the keys. Let me tell you something, those first six months are the toughest – but Puorto turned them into a great song.
After that, the band performs Sugar Daddy, a smoldering number that showcases Puorto’s vocal chops. It’s a great late night song that gives her a chance to open up her soul to the audience. Greathouse uses a retro sounding electronic keyboard that gives the song a different feel. Very cool number.
Candi Stanton’s Evidence follows. It’s got a fast pace and Puorto unleashes her inner beast as she growls through the song. This is a woman with a take no prisoners attitude, and any man in her life should take notice and act accordingly!
Puorto tells a little story to open the next song, All I Want Is You. The song is a soulful blues song that opens quietly before turning into a full throated blues song. Puorto holds nothing back and her intensity is impressive to say the least.
We all have those things that drive us crazy. My Obsession is a song about one of those things. Leave it to Puorto to find a clever way to work hers into a song that has a nice twist in its approach. I liked it the first time I heard it on her previous full album release (she’s since added an EP to her collection of releases) and enjoyed it here as well.
The band works through the slow burning All About You. Puorto is in full control, using her voice to blast through and above the music. It’s a powerful number and one that could easily pick up some airplay on our show and many others.
Puorto and company closes with a couple of covers. First up is Savoy Brown’s I’m Tired. It’s a solid blues rock tune that comes in loud and proud and full of attitude. Can’t go wrong with this one if you like your blues with a razor sharp rock edge. Great choice for the band.
She ends the album with Steve Winwood’s Can’t Find My Way Home. It’s a lovely low key song that strips everything down to its basic components. It gives the album a touch of sentimentality and shows Puorto’s softer side. She’s been mostly edgy and funny, but here she’s much more vulnerable. Beautiful ending.
Let me say this as plainly as I can. I think that Shari Puorto could be the next big breakout singer. She’s got all the tools – a great voice, a top notch band, and superb writing skills. This latest album, Live At Bogies, shows that she can work a crowd extremely well and her song selection is quite moving.
If you’re not yet a fan, drop by her place on the world wide web at https://sharipuorto.com/ and look over her albums and make plans to catch her live.
And Shari, I hope you’ll be heading to the East Coast sometime in the near future!