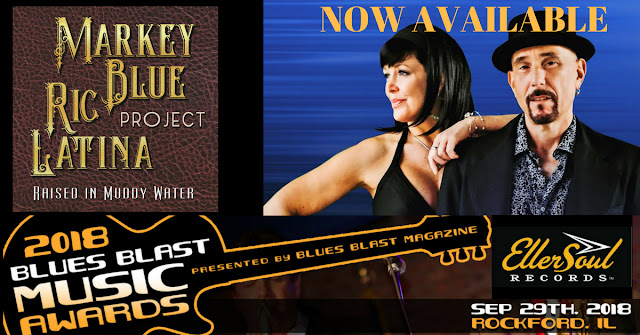 (At some point I will address what happened to cause the Juke Joint to go mostly dark for so long. It’s not that interesting a story, and it’s safe to say that I’m back and have stacks of albums to go through. I would like to thank my friends, The Nugent Family, especially the late Robert “Bob” Nugent and his son, “Superfan” Scott Nugent for their amazing and unwavering support. Now that the personal stuff is done, let’s listen to some music.)

Signing with Richmond, Virginia based EllerSoul Records seems to have had a good influence on the team of vocalist Markey Blue and guitarist Ric Latina, as their first effort on their new label is a very satisfying effort called Raised In Muddy Water. I’ve been fortunate enough to review some of their earlier work, and I feel that the group has matured into a powerful act and seem poised to make some serious inroads into the business.
Blue and Latina are joined by John Marcus on bass; Marcus Finnie on drums; Shannon Wickline on keys; Jim Williamson on trumpet; and Doug Moffet on sax and baritone sax. There are also a couple of special guests that we’ll mention later.
Markey Blue is quite the songwriter as well, as she wrote all of the 11 songs on the album.
The opening song happens to be the title track, Raised In Muddy Water, and it starts out with a slow delta growl that seems to come from deep in the depths of steel strings and the soul of someone born to the blues. The lyrics are evocative, and within seconds I fall completely under the band’s spell. If it continues along this way, I feel this is going to be a great album.
The next song, Corrina Shine, is also a tribute. This time it’s Taj Mahal that receives the homage. This song is more of a rocking blues tune that you can bounce to like you’re in your favorite rocking chair on the porch or boogying on the dance floor. Markey Blue’s voice is powerful and assured and Ric Latina’s guitar riffs soar high and the two combine to make for some very good music.
Their third song, A Little More I Die is listed as an ode to one of America’s best songwriters, John Prine. I’m a huge fan of Prine and have been fortunate to catch him on a couple of occasions before his ticket prices got so high I had to cash in a 401 K plan in order to see him. This is an interesting song to cast light on Prine as Markey Blue tells a great story with her lyrics and Latina responds with beautiful, plaintive playing. Lovely song.

After that is Red Room, which features guest harpist Li’l Ronnie. The band gets into a rocking groove and Li’l Ronnie’s harp gets the fun started playing off of Wickline’s keyboards. This is a straight up fun song designed to get people up on their feet and shaking their butts. Have a good time with this cool, dark tune and when you step in, you know you won’t want to leave.
The band follows up with another dark song that comes across as fun, Mississippi Soul. It’s very much a mix of delta guitar and vocals but mixed with some very cool New Orleans licks on the keys and drums. It’s a very cool combination and I like it very much.
After that, Blue, Latina, and Company slow things down nicely on Walking Over This Line. While they have rocked fairly non-stop to this point, they bring things down from a boil and let it all simmer over a low but powerful flame. It’s good to hear her vocals at this tempo mixing with Latina’s strong playing.
I Like It Like This features one of, if not the last, performances of Blues Hall Of Famer, Eddie “The Chief” Clearwater. I always liked Clearwater and the choppy Chuck Berry-esque way he played guitar. I can only imagine that the group had some fun cutting this number. I sure had a great time listening to it. Even hit the repeat button a couple of times just to hear their voices blend.
The next song, Tears All Over The World, is a bit slower tempo but doesn’t lose any power in doing so. It’s a song that tries to address Blue’s take on all of the less than good things going on in the world. Whatever side you fall on, you’ve got to admit that there’s a general lack of tolerance for differing views. So many want to help, what’s it going to take?
They band segues into to the slow and intense love song, When I Close My Eyes. This is a cool number of the heartache and pain that separation can cause. Latina’s guitar riffs take on an emotion of their own and the song hurts in a good way. Another strong take.
We’re almost to the end of the album, so Blue and Latina want to slide in one more tribute, this time to Delbert McClinton. Come And Go is the result. It’s a solid rocking number full of sass and vinegar. Blue’s voice is brassy and belts out over the band refusing to take on a lesser role. It’s fun and swinging at the same time.
Last, but certainly not least, is a live bonus track, Drowning In His Ocean, that features Wes Little on drums, Brian Allen on bass, and Shannon Wickline on keys. I always like to hear a band’s live performance as it often differs from the studio environment, and here, I can tell that The Markey Blue Ric Latina Project needs to be seen live in order to savor all the flavors they bring to their music. I had to miss them the last time they came through here, but you better believe that won’t happen again.
Be sure to check out their website at http://markeyblue.com/ and scope out their albums and tour schedule. You don’t want to miss them when they come around. And if you want more information about our good friends at EllerSoul Records, you can find them at http://www.ellersoulrecords.com/.
It’s always worth the extra effort!