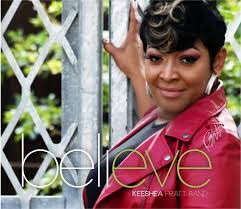 Mississippi raised but now Houston based Keeshea Pratt is a very accomplished singer and performer. How accomplished? The Keeshea Pratt Band took the top honors in the band category at 2018’s IBC in Memphis. That’s never an easy goal to reach, but their blend of showmanship with outstanding musicianship led them to the top.
As an encore to their work in Memphis, the group has released a follow up album tiled Believe. It’s a magical word that not only gives one hope, it gives assurance, as if you have the ability to believe, you can accomplish anything.
Pratt is backed by musicians Shawn Allen, Tommy Folen, Colin Hogan, Nick Fishman, Kid Andersen, Brian Sowell, Bob Welsh, The Mighty Orq, Joshua Cook, Charlie Gurke, Dan Carpenter, Ken Moran, James Williams III, Henry Hung, Misaki Nishidale, and Little Terry Rogers. Backing vocals are provided by Brian “BJ” Hubbard Sr., Lari Johnson, Jaylee Dembee, and Maya Kyles.
The album starts out with some sweet soul on Make It Good. Pratt establishes that she’s got quite a vocal range. Here, she’s quiet and loving and the horn section boosts the sound nicely.
They follow up with full, swinging Have A Good Time Y’all. It’s a fun song with some vocal power in Pratt’s voice. This is a great song to open a show, it sets the tone for a great time to follow. The call and response is a blast and it immediately put me in a good mood. Let’s get the show rolling!
Pratt and the band mellows out with the next song, In The Mood. It’s a beautiful soulful number that will be on my late night playlist. So sweet, so calming, a perfect song to unwind after a long day. The last couple of songs will definitely be making appearances on Time For The Blues.
They go from mellow to low and slow on It’s Too Late. Music wise that is; Pratt’s voice is as sharp as a diamond edged knife and she cuts through the quiet music to let you know that she’s not putting up with your shenanigans anymore. Great blues tune, and boys, listen up – this is not a woman to disrespect. Nice piano break as well.
They pick up the tempo with the New Orleans flavored Shake Off These Blues. There’s some great trumpet blowing the opening of the song and it put me in a big old Mardi Gras mood. Pratt is a great entertainer who fully understands that she’s putting her entire soul into each and every song. So much fun!
The album reaches the half way point with the old school delta style Home To Mississippi. Pratt grew up in Mississippi and her affection for her home is deep. So many great blues artists came from the state and spread the music all over the world. Pratt is one that could continue that tradition.
She’s back to swinging with Easily Replaced, a breezy number that is almost guaranteed to get an audience up on its feet. Love the horn section, it really makes her sound, and her guitar ain’t so shabby either…
Monkey See, Monkey Do starts off with a smoking introduction with guitars and horns vamping. Pratt’s voice has recovered its diamond edge and the song has a dark menacing nature to it. I would tread lightly around this version of Pratt. She acts her songs better than many performers can sing theirs. She truly is an extraordinary talent.
Next up is the title track, Believe. It opens with some lonesome guitar that gives way to festive horns. Pratt opens up her soul on the song talking about what she’s gone through on her journey. It’s ultimately a very uplifting number that doesn’t hold back on its punches.
She pulls out the funk for Out Of My Mind. It so reminds me of some of the great funk that came out of Stax in the early ‘70’s and went coast to coast. She’s definitely got her edge on this one and it might not be appreciated by the blues purists, but Pratt pushes envelopes, and this is a solid audience pleaser.
Pratt and the band channel Motown for Can’t Stop Now. It’s got that sweet all female group sensibility, or so it seems. Fairly quickly she mixes in some anthem rock and switches back. It’s a tricky performance but she carries it off well. After 11 songs, I’m not sure there’s a genre of music she couldn’t conquer.
The album closes with an extended live version of So Bad Blues. Heavy on the bass and organ at the opening, there’s a nice clip of Pratt relating to her audience. She packs a lot of power into her voice and is reminiscent of the way Etta James would approach her audiences. She’s so damn good…
I really wish I had been in Memphis to catch the Keeshea Pratt Band when they were performing at the Blues Challenge. What a show they must have put on! Fortunately, Believe is a great album and it gives us an idea of just how much better they can become.
Be sure to check them out at http://keesheapratt.com/ and be sure to catch them live if they come anywhere near you!