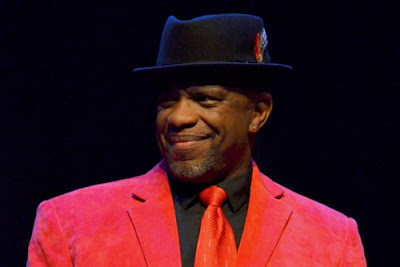 The motto for every show that features harmonica master Bobby “BlackHat” Walters is, “You never know what’s going to happen at a Bobby BlackHat show.” If there were ever a case of truth in advertising, it most certainly is the show that Walters and his four-piece band unleashed in Richmond’s Tin Pan tonight.
It was difficult to get an accurate head count of the audience, because every single person was milling about, greeting old friends and being greeted in turn by Walters or one of his bandmates. Walters is backed by keyboard extraordinaire Lucy Lawrence Kilpatrick, guitar wizard Tom Euler, and a kick ass rhythm section comprised of Michael Behlmar on drums and Brian Eubanks on bass.
Starting promptly at 8:00 p.m., the band quickly got the audience on their side with Euler’s ripping guitar leading everyone into a spirited rendition of I Know What You Mean. It was such a smoking version of the song that at one point Walters tried to fan Euler while he was playing furiously.
Walters and the band ran through a fast paced set comprised mostly of original songs, with a few covers thrown in for fun. All of the musicians are talented and strong enough to anchor their own bands, but together they are an unbeatable force.
Behlmar takes on a hard driving drum run as the band moves into a great version of Further On Up The Road. During the song there was a fine break that started off with Kilpatrick and shifted to Euler. The band would repeat this linked performance on a number of songs, with Walters adding his harp to many of the songs, mixing things up nicely.
Walters then delivered the most moving song of the evening, I Hear Mama’s Voice a very emotional number dealing with the phenomenon of hearing your mother’s voice in your head after she passes. A beautiful piano run by Kilpatrick added to the mood and there were few dry eyes in the house.
As Walters needed a little time to recover after that song, he turned the vocals over to Euler for a fun song, Lie To Me, which featured an extended jam that had Eubanks and Euler slipping in a famous riff from the Rolling Stones’ Miss You.
From there, Walters got back behind the mic to provide the vocals on a fun song for the parents, Nursery Rhymes Shuffle. He took a series of Mother Goose rhymes for kids and turned them into a terrific blues song. During the song, Walters walked through the audience and had a great trade off between harp and guitar.
Next up, Walters called up his lovely wife Joy for a terrific slow blues number, Good Explanation. I would never believe the interplay between a couple that hadn’t been together as long as the Walters’ have been. Joy Walters has a great voice and held her own every step of the way, and even got in more than a few punches of her own.
To slow things down, Walters and the band played a stunning version of Leonard Cohen’s Hallelujah. The instrumental gave Walters’ harp the lead and it was a beautiful sweet rendition of one of my favorite songs.
Giving the audience a chance to choose between a fast song or a slow one, and having them choose a fast one, the band pulled out all the stops for Two By Four. Walters then called up two performers from the audience, jazz chanteuse Sharon Rae North and a sax player he had never met before named Dave. North and Dave then helped out on a wonderful version of Stormy Monday.
To prove that you absolutely could never know what would happen at a Bobby BlackHat Show, he followed up with another guest performer – your humble narrator – to help him perform a dark and spooky number. I added music from my instrument, a didgeridoo, to add a series of dark and strange sounds.
Some liked it, others not so much, but it was a lot of fun for me and one of the scariest four minutes I’ve ever spent.
As the band was running out of time, Walters made sure to get in a rendition of Honey Biscuit (a terrific song about his love for his wife), which was also the name of a special cocktail the Tin Pan created for the evening.
They then launched into a version of Red Shoes, one of Walters’ signature song and with the house lights fully up, he moved around the crowd and danced with most of the ecstatic members of the public before closing with a hot cover of I’ve Got My Mojo Working complete with audience participation.
If there were any people in attendance who were not friends or admirers, they left as enthusiastic devotees waiting for the band’s next appearance in the area.
One motto of live music is, “It there aren’t butts in the seats, there are no bands on the stage.” Walters believes this deep in his soul and pours his heart into every show. You will never get a half-hearted performance from him or any member of his band. If you get the chance to see this great band, don’t pass it up.
To see what’s coming to the Tin Pan, be sure to check out their website at https://www.tinpanrva.com/ and see when Bobby and the gang are playing near you at https://www.bobbyblackhat.com/.