It wasn’t that long ago that I heard my first Ally Venable album on Connor Ray Music. I was immediately impressed by her musicianship and wondered if it was a fluke, or if she was a genuine talent that could continue to create great music.
Now, with the release of her latest album, Puppet Show, that question is answered. She’s good, damn good and proves that she is no flash in the pan. Her guitar playing is strong and her vocals are even stronger. She manages to keep a sharp edge on both through the entire album.
Venable is backed by Elijah Owings on drums and Bobby Wallace on bass. Special guests include Gary Hoey and Lance Lopez on guitar on one song each and Eric Steckel and Steve Krase on keys and harmonica on two songs each.
The album explodes with a serious rock blues song, Devil’s Son. Venable seems to be one of the great proponents of blues with a serious metal edge. Blistering guitars are the norm, but listen to her voice, it’s not shrieking, it’s controlled and conveys great emotion. If you’re looking for quiet front porch blues, this is probably not going to be your cup of tea, but if you like your music on the dangerous side, stick around. Gary Hoey guests on the song.
She keeps the intensity high with the next song, Bridges To Burn. It’s a gutsy number that is reminiscent of those artists who mixed the blues with rock and roll in the mid-1960’s to great effect. Venable takes her vocals to the breaking point with a nasty snarl – punk attitude is perfect for heavier blues songs like this.
Next up is Cast Their Stones, another song that bolts out of the gate rapidly, but this time she lets the song slow down a little bit and push the rhythm section a little more. It’s a good track that again walks a tightrope between blues and rock, but considering that Venable is still so young, one must expect her to experiment while she is finding and refining her sound.
Steve Krase lends his harmonica to the delta sounding Backwater Blues. Here’s one for the purists with a beautiful low key old school style number – or so they will think. Yes, Venable pulls a musical switcheroo and turns the song sideways until it lands upside down with some great edgy chops. Yeah, you’ll be hearing this one on Time For The Blues. Maybe a few other shows as well. 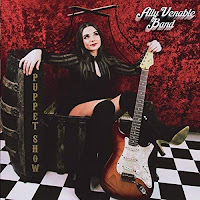 She follows up with a gender reversed cover of a Taj Mahal classic. He Caught The Katy features Krase once again on harp and adds Eric Steckel on keys and delivers a kicking honkytonk version of the song. It’s true to the spirit of the original and Venable still makes it sound like it’s hers.
She follows up with the title track, Puppet Show. This one is darker in tone and by slowing the tempo she ratchets up the power. Forget how young she is at this point in her career, she has a great approach in both her guitar and vocals. She creates great music.
The longest song on the album is next, Comfort In My Sorrows. Strangely enough, it’s the song with the fewest lyrics. It’s a slow burn that will get into your soul and light a fire. I love the song, and even though we rarely get a chance to play songs that run seven-plus minutes, I’ll be looking for the perfect place to add this one to a playlist.
She picks up the tempo and plays some gritty choppy guitar on Survive. Joined once again by Steckel on keys, the song delivers some more solid rock blues. This could easily be a crossover song for those few stations brave and ambitious enough to go looking for quality material and not just the same old same old.
Venable continues rocking on Waste It On You. Decent song and consistent with the high caliber on song she’s been performing on the album. She closes the album with Sleeping Through The Storm, a high energy funky number in the ZZ Top vein. Solid song and a great way to end the album.
This is my second time listening to an Ally Venable album, and she continues to impress me with her songwriting, playing, and vocals. One thing I especially like about her label, Connor Ray Music, is their commitment to working with new talent and surrounding them with players that can push them to reach higher while supporting their dreams.


Check her out at http://www.allyvenableband.com/, and make sure to catch her live if she comes anywhere near you.
John at 9:10 PM
Share