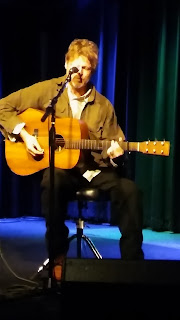 There’s a long tradition of a solo performer; an artist with an instrument and a voice that combines with poetry to cast a spell over an audience. Paul Edelman is an artist who is very much in that vein. While he’s been working as a small band, The Jangling Sparrows, lately, when his drummer came down with the flu that’s creeping its way across the country, he packed his guitar, put his foot in the road and travelled from Asheville to Richmond by himself to play a show for a small but very appreciative audience.
It was a quiet opening. There was just a chair, amp, monitor and a single microphone on the stage. No pedals, no extraneous chords, nothing that could get between Edelman and his audience. Many in the audience were unfamiliar with his work, but trusted someone telling him how good he was, or maybe just trusted that if he were playing The Tin Pan, it had to be worthwhile to see what he had to offer.
What Edelman has to offer is a wonderful evening of music and more than a few stories. He went through a delightful set of songs for the next two hours and had stories to go with just about each. He’s a very personable performer and hopefully we will progress from cult figure to wider acceptance.
He started the show off with an older song, Highway Doesn’t Know, from his solo album Stranger Things And Truer Words album. It was a lovely song and it set the mood for a quiet evening of musical storytelling. He followed up with another song from the same album, Ballad Of Lizzie Mainford, that dealt with the emotions of a woman leaving home.
After that second song, he mentioned his CDs, but he was clearly not comfortable doing so; he even remarked that he had “never gotten the hang of pimping himself on stage.” Let me just comment that for many performers, appearances don’t pay all the bills, and with the limited payments that online services provide, an artist selling CDs and other merchandise often makes the difference from being a fulltime artist, and a part-timer with a day job.
After that, Edelman played a song he deemed his “personal Dock Of The Bay,” a meditation on where he grew up, Burning A Hole. He followed up with a song that hasn’t been released yet, Rabbit Hole. He would pepper the rest of the night with new songs that have yet to released, and it was a real pleasure to listen to music that was still in early stages.
From there he played a nice classical style intro to Chase It Down, then revisited his childhood memories for the collage song, Daddy Says, and the song Hidden River.
The next song was written about a friend’s wedding, and again it hasn’t been recorded. It hasn’t even been titled yet, although I am calling it Old Friends Catching Up (Sparkle And Flicker), until it gets a name. From the impetus of a wedding, he began to examine the theme of growing older with Eyes Of A Stranger and A Year Is Still A Long Time.
Afterwards he asked if everyone was okay. He could actually play some dance tunes if we wanted them. He was told in no uncertain times that we were enjoying this musical journey and he could proceed as he saw fit. Edelman then took a second to demonstrate two of his favorite chords to play and indeed they went well together. Don’t ask me what they were, I’m not a guitar player and couldn’t explain what he was showing.
It sounded good, though…
He went back to exploring themes dealing with growing older, Somebody Again led to New Wheels and Great American Limbo. He followed up with a ghost story of a number, Old Red Song and a creepy tune, Label’s All Mine, that’s not yet recorded.
Up until this point, Edelman has only played original tunes, but he took a break with Love Please Come Home that was originally performed by The Stanley Brothers. He showed off some fancy picking on this number. He followed that with Trouble Is A Stray before playing another brand new song, not yet titled, that is a love song for his wife. I’m calling it Moonlight until it gets a final name. Gorgeous song, hurry up and record it!
The next song, Anyhow, also hasn’t been recorded, and was followed by an older song written by a friend of his, The Blue Route (Who Leaves The Lonely People Alone). The latter song sounded to me as if someone had put together two of John Prine’s best, Sam Stone and Hello In There. It’s a powerful song, and I hope to track down the original recording soon.
The country sounding, Space In Between The Notes followed, and then another country sounding song, Chopping Onions. Not Chopping Broccoli that Dana Carvey made famous, something entirely different.
At this point, Edelman was well over 90-minutes into the show when he played Blame The Sky and That’s All Night. Since it was a school and work night, he lost a couple of audience members, but he thanked them for coming out and finished up with two more numbers, I Lied Because I Love You and closed with his one political statement, Go To Hell John Wilkes Booth.
Edelman is a wonderful and personable performer. His voice is strong and expressive and his playing is tight and covers several different styles. As much as I enjoyed this evening, I will be interested to see what he does with the rest of the Jangling Sparrows, as I found their album 140 Nickels to be one of the best I’ve heard this year. 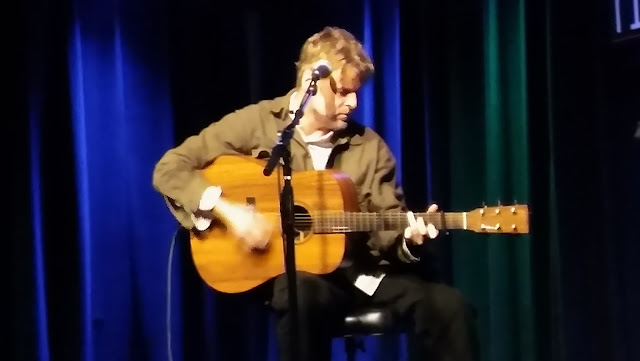 If you are a fan of Roots/Americana music, or just of good songwriting, Paul Edelman is a performer that needs to be on your radar. You can find him on Facebook or https://janglingsparrows.com/. Take the journey, you’ll be glad you did!

(All photos taken at The Tin Pan by Jessica Wood. Used by permission.)
Posted by John at 3:36 PM