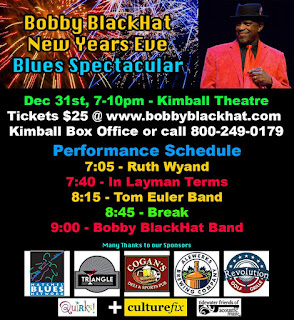 If there is a better way to celebrate the end of one year and the beginning of a new one than with good friends, great music, and the warmth of laughter, I don’t want to know about it. Last night, Tidewater Bluesman extraordinaire Bobby “BlackHat” Walters put on his red jacket, donned his signature black chapeau, and wowed a crowd of 400-plus revelers like he was born to do it.
To be sure, Walters had a lot of help entertaining this very enthusiastic crowd. Prior to his appearance on stage at just past 9:00, the audience had already been treated to performances by Ruth Wyand, In Layman Terms, and the Tom Euler Band, all of whom will be representing Virginia in Memphis for the International Blues Challenge this year.
All three acts are veterans of the Challenge in recent years, Wyand even attained the finals of the solo/duo category in the 2017 edition, as did Euler’s band when they backed Walters in 2016. In Layman Terms has made three appearances in the adult category to go along with other appearances they made in the youth showcases.
The Kimball Theatre, located in Williamsburg’s chic Merchant Square shopping center, is a lovely classic movie theatre that has stopped showing movies and has been renovated into a live performance venue. Seating over 400 people, there were few seats open when the show started, and none left by the time the first artist, Wyand, finished her set. In fact, there were folding chairs brought out for the overflow people that made their way to the theatre during the coldest night of the season thus far.
Wyand, a one-person band who plays guitar, drums, and pretty much anything else she can get her hands on, used her roughly 30 minutes to set the mood for the show. Her charm was infectious as she connected with the audience, even joking at one point, “Let me introduce the band…”
After her well-received turn, the next performers were In Layman’s Terms. ILT is from Williamsburg and many in the audience were there to see them perform. The band’s nucleus is the brother and sister tandem of Cole and Logan Layman on guitar and bass and vocals respectively. They are joined by Hamed Barbarji on trumpet and Austin Pierce on drums for a tight sound that sometimes flies very close to jazz but is very deeply rooted in the blues.
In Layman Terms received the first standing ovation of the night at the end of their set. Always modest, the members of the band had to be reminded to take their bows from the audience.
If the show had ended there then everyone would have gone home satisfied, but we were less than halfway through the evening. The Tom Euler Band came on next and proceeded to raise the stakes with a high-energy set of blues and rock that further electrified the audience. Including blistering covers of Whipping Post and Led Zeppelin’s Rock And Roll, they mixed in originals that had the audience cheering. Euler played guitar and handled the vocals and was joined by Lucy Kilpatrick on keys and a rhythm section comprised of Von José Roberts on bass and Michael Behlmar on drums.
At this point, the emcee for the evening (your humble narrator) had to give the audience a small break to give the audience a chance to visit the facilities as well as pick up some music. All of the bands brought CDs for sale in order to raise capital for their respective trips to Memphis this year. Winning their local competitions is just the first step, they have to have the resources to get there and have a place to stay during the week-long run of the show.
With the break over, it was time for headliner Walters to take the stage. Walters has a large following, not only within Virginia, but all over the country thanks to his several CDs, appearances at the International Blues Challenge and various festivals, and his work on military bases in support of our nation’s service men and women. Walters is a veteran himself who, in the past, has served in the White House, and who has made giving back to his community a large part of his performing philosophy.
Since his motto is, “You never know what’s going to happen at a Bobby BlackHat Walters show,” Walters pulled out all the stops to make it come true. Two of his daughters, Shayna and Akeylah Walters, joined him for a song and at one point he stopped a big dance song, Red Shoes, that featured long-time friend and musician Lucius Bennett, short to remind the audience that there was plenty of room for them to get up and shake their stuff.
They didn’t have to be told twice and many of them leapt to their feet to boogie down. In fact, Walters left the stage in order to join them in the celebration.
There wasn’t much he could do to top that, so he brought out all of the musical performers plus guests for a show-stopping version of I’ve Got My Mojo Working before extolling those in attendance to go visit local tavern The Triangle to finish ringing in the New Year.
That’s another of Walters’ philosophies, share the wealth and celebrate other’s talents. I don’t know if he ever gets jealous of another performer – I suspect he does not – but he encourages other performers to make themselves better, and he is not shy to tell audiences and friends about other great acts he’s seen.
His support was a great reason for the initial success of the New Year’s Extravaganza. Every act was delighted to join in the fun and did everything in their power to ensure that the audience had a great time. While the show was going on, the Kimball Theatre committed to Walters having another show their next New Year’s.
Plan on ordering your ticket now, you won’t want to miss that show!