Vintage #18 Rocks The Tin Pan And Shimmies All Night Long 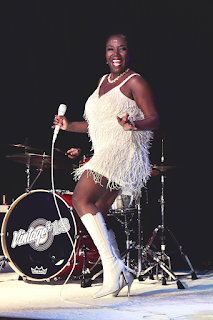 On a beautiful early Autumn evening, the soul blues group Vintage #18 cruised down 95 South from Baltimore and unleashed their brand of smoking entertainment on an appreciative crowd at Richmond’s Tin Pan. It was their first trip to the Capital City, but judging from the response of the crowd, it certainly won’t be their last.
In the space of about two hours, they managed to perform more than 20 songs and still have time for lead singer Robbin Kapsalis to chat up the crowd and even dance with one of the more enthusiastic audience members.
I was first introduced to their music earlier this year when they released their debut album Grit, and I enjoyed their music very much. It appeared to me that they had a great sound, but they were working primarily in the Maryland, Washington DC, Northern Virginia corridor and my opportunities to catch them might be limited.
I was delighted to hear that they had accepted a booking here in Richmond at a great club and quickly made arrangements to attend. I only wish I had found out sooner so I could have promoted it more.
Still, it was a great time and I was joined by my good friend and fellow blues fanatic Scott Nugent, and we settled in for what turned out to be a stellar night of music.
The band, which is made up of Bill Holter on guitar, Mark Chandler on bass, and Alex Kuldell on drums launched into an instrumental that was actually variations on Mel London’s Messing With The Kid, before Kapsalis came running to the stage. “Running” may not be the correct word as she was decked out in white go-go boots and a dress that seemed to be all fringe and sparkles.
Kapsalis then started in on her first song of the night, Diamonds Are Optional, and Holter’s amp died, meaning he had to quickly run out to the van, get his back up and hook it up. That meant the band would have to soldier on or stand around, and fortunately Kapsalis delivered a stunning version of Otis Redding’s Dock Of The Bay backed only by Chandler and his bass.
With the new amp up and working fine, the band then segued in to a series of up tempo numbers including Love Hang Over, Lil’ Ed’s Cannonball, and Bop Ting Aling, and if there were any doubters in the audience from that point on, I didn’t see any…
She then moved into a couple of great tunes, Blues Is My Business and Born Under A Bad Sign and for the rest of the performance mixed great classics with originals.
One thing I need to make very clear is that, as good as I thought their album Grit was, Vintage #18 is a band you have to see live in order to appreciate their level of performance. The three players set up a groove that’s deep, and Kapsalis is a singer who ranks among the best I’ve ever seen. She is a ball of fire who never stops. She sings, dances, and connects with the audience like they are old friends and just hanging out in her living room.
If they come rolling down the highway to anywhere near your town, make your reservations early because you do not want to miss this fantastic group. I’m already checking websites to see when they are coming back to town, and you better believe I’ll be there!