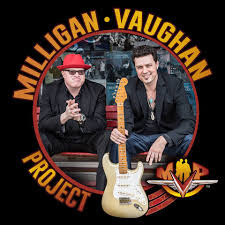 It has to be tough to be the child of a famous person. Oh sure, there are perks and doors will be opened for you at some point if you want to follow in that famous parent’s footsteps, but let’s face it, if you don’t have the chops to go out on your own once you step through that door, you’ll end up disillusioned and be quickly forgotten.
How many children of star athletes can you remember who don’t live up to those crushing expectations? Or actors? Or singers?
The self-titled debut album of Texas-based performers Malford Milligan and Tyrone Vaughan, collectively known as the Milligan-Vaughan Project arrived just ahead of its August 4th release on Mark One Records. The Vaughan in question is the son of Jimmie Vaughan, one of the best-known guitarists of his generation, and the nephew of Stevie Ray Vaughan, a legend around these parts for everything he was able to accomplish in his short 35 years on this earth.
I promise I will try to focus on Vaughan for his own merits and not go on and on about his famous family. The door has been opened and it’s time to see if he stands on his own.
The album contains eleven tracks, nine are studio recordings and the remaining two are live cuts that were recorded at the One 2 One Club in Austin, Texas.
While Milligan took on the vocals and Vaughan the guitars, they had the help of a number of top musicians including Chris Maresh and Jeff Hayes on bass; Brannen Temple and Kenneth Furr on drums; Michael Ramos and Jay D. Stiles on keys; Jorge Castillo on guitar; and Mike Cross on backing vocals.
Along with producer David Grissom, they wrote or co-wrote six of the songs on the album and chose work from such artists as Buddy Guy, James Cleveland, and a showstopper from none other than another Texas legend, Freddie King himself. (Another legend whose life was shortened.)
First up out of the chute is the funky rocker Soul Satisfaction. Written by Grissom and Davey Knowles, it has a scratchy rhythm and heavy percussion. It might not be straight blues, but considering the pedigree of the guys making the album, it does show some fireworks that just might make for a dazzling show.
They follow up with Dangerous Eyes, and Vaughan shows off some sweet guitar licks. The group is still rocking, but it has a stronger blues edge to the music.
Vaughan wrote Little Bit Of Heaven, and surprisingly he keeps his guitar in the background during the opening, favoring the organ and percussion to set the mood. However, once he starts in on his run, he cuts loose and lets it soar. Very solid number that should keep the rock blues fans happy.
Driving You is written by both Milligan and Vaughan and it’s a slightly different style from their previous cuts. It’s still got an edge, but it has a little more of a swing to the beat. Milligan’s vocals have been gravelly throughout the album, not bad, and not so hoarse that you can’t follow him lyrically. Four songs in and they are delivering on their promise.
Their interpretation of Buddy Guy’s Leave My Girl Alone is flat-out one of the best songs on the album. Vaughan’s smoldering guitar creates a gorgeous canvas on which Milligan’s vocals complete the picture. It’s slow, controlled, and searing. This is one I will be playing, and wishing I could insist of every other show do the same.
There’s some jazzy funk that follows in Compared To What. Originally made popular by Les McCann, this song kicks some serious butt. It’s the kind of song that has to get an audience out of their seats and out on the dance floor. I would love to see the guys play this one live. Vaughan has a lot of fun with his guitar.
Another song written by Grissom and Knowles, Here I Am, is next. It’s a heartfelt ballad that has got some real country flavor to it. Milligan does a great job on the vocals, he’s very expressive and adds some gospel fervor to his delivery.
Next up is Devil’s Breath, which Vaughan co-wrote with Dan Dyer. It’s a dark song, as one might suspect given the title, with a menacing rhythm and the kind of song that could make a brave man look over his shoulder, just in case. It’s a southern gothic story in four-and-a-half minutes.
The final studio track is James Cleveland’s Two Wings. It’s a song of hope, the essence of the blues, and with Cleveland’s gospel background it’s totally understandable. The song is stripped down to Milligan’s vocals and Vaughan on an acoustic guitar. Lovely version.
What follows is a couple of live tracks, starting out with a Grissom number, What Passes For Love. No matter how good a studio recording is, the test is always going to be how do they do in a live setting? You can hear the energy coming off the stage while they play.
They end the album with one Freddie King’s signature songs, Palace Of The King. Written by the trio of Donald Dunn, Leon Russell, and Don Nix, it became one of King’s best-known songs. Vaughan throws out some amazing guitar pyrotechnics and the band rocks their way through the song with ease.
Earlier I asked the question, can Tyrone Vaughan stand on his own? You better believe it. He’s definitely got the chops to carve out his own career. And while some licks may have a certain familiarity to them, he seems at home with funk, soul, jazz, a touch of country, and rock to go along with those blues.
The Milligan Vaughan Project has dropped an impressive debut album. Can anyone say where it will lead? I wouldn’t hazard a guess. Considering their age and their place in the music industry, I fully expect they will have their pick of other projects for the future.


Let’s just kick back and enjoy whatever they choose. In the meantime, you can find out more about the group at http://www.milliganvaughanproject.com/, and be sure to see where they will be touring in the future. If you’re like me, you can’t wait to catch them live!
Posted by John at 9:24 PM