Paul Reddick ~~ Ride The One 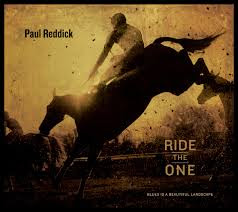 Once again, I’m way behind the eight-ball on this one. I actually received this copy of Paul Reddick’s latest album, Ride The One, back in 2016. You know, the year it was released. I gave it a listen, liked the sound, played one song on Time For The Blues, and promptly lost focus by other incoming CDs.
Story of my life.
When I heard the story from some of my Canadian friends (Hi, Sarah! Hi, Gail!) that Reddick had won the Juno Award for Best Album – that’s the Canadian version of the Grammy’s – I remembered I hadn’t written a review as of yet.
So, it was time to reach into my collection of CDs to be reviewed and remedy that situation.
If you are not familiar with Reddick, he’s an amazing songwriter, harp player and singer who has released a number of albums with his band, The Sidemen, as well as solo. His songwriting is so strong that he is Canada’s unofficial Poet Laureate of the Blues.
On this album, he worked with Greg Cockerill and Colin Cripps on guitar and backing vocals; Steve Marriner on guitar, Rhodes, and backing vocals; Anna Ruddick on bass; and Derek Downham on drums, piano, talk box guitar, and percussion. Reddick and Cripps wrote all eleven of the songs.
The album starts off with a raucous tune, Shadows. It’s a hard rocking number and Reddick is on fire vocally and his harp playing takes the song to a different level. Listen to the lyrics, they are poetic and I found them to be on a different plain than most songs. I can see why he has such a great reputation for both lyrics and harp. This is going to be a wild ride.
Reddick follows the opening with Celebrate, and continues with the high energy assault. He and his band are still driving and mixing their blues with a major dose of rock. The rhythm section gets a real workout on the number and listen for his harp break – this guy knows how to play!
He brings the tempo down on the next song, Mourning Dove, and changes his vocal approach as well. Here he’s more open, and the song has a bit of country flavoring with the blues. Again, his lyrics are very cool, very poetic. I like the song and will have to find a way to bring it to an episode of Time For The Blues.
The next song reminds me of some of the Allman Brothers’ classics. Gotta Find A… has a tight hook and it’s an enjoyable tune. The second shortest song on the album, it’s pleasant and the guitar work is especially good. Reddick gets nasty funky with It Goes With You. It’s the kind of tune that moves people to the dance floor and the blues are crunchy and driving. It moves the music into a different direction, and it’s a lot of fun.
He keeps the pace moving on the follow up, Watersmooth. It’s still got some funk in the backbone and his vocals come across somewhat smoother. The imagery in his lyrics is still strong – he works in different arenas than the tried and true blues subjects. Interesting choices.
Diamonds really explores country swing influences. The lyrics are pure poetry, but the music has some real bounce to it and the vocals are delivered in such a way that it seems like it’s come from another era. It’s an otherworldly sound and a fascinating song. Might have to listen to this one a couple of times. Reddick’s harp work is lovely.
He starts off Living In Another World in fifth gear. Everyone in the band is flying fast just trying to keep up with him. He kicks it with his harp break as well and never lets up. I Tried To Tell You keeps the intensity but brings the pace down slightly. This is one performer who isn’t content to just sit back behind the microphone and croon how the world has treated him bad – he’s got a punk rock attitude to bring to the blues. It’s a fresh approach and it’s easy to see why he’s become so popular.
For the next song, Love And Never Know, he’s got a nice mellow sound. His voice actually does croon a little bit and the contrast is nice. I have to be honest, I am generally drawn to albums where the artist experiments and demonstrates that he or she is capable of tackling different sounds. Here, Reddick shows that he has that versatility, and it’s been his artistic choice to approach the songs with more drive and determination.
He brings things to a close with the shortest song on the album, Moon And Star. His harp opens up the song and it’s just his harp and vocals throughout. These last two songs truly show that he’s an artist of rare talent who can take on those different sounds and make them all sound good.
I honestly wasn’t sure what to make of the album when I looked at the cover and saw the silhouette of a horse race. It could pretty much go in any direction, and I knew Reddick has a reputation of one of the best bluesmen in the entire Canadian Provinces, but I had never just sat down and listened to any of his previous work.
Now, I’m greatly intrigued. With his victory at this year’s Juno Awards for Best Album, there will be more focus on him from outside Canada, and maybe we’ll be able to discover for ourselves just how good this man is. Ride The One is a great place to start, and I look forward to sampling more of his work very soon.
If you think you might like to sample some more of his work, put your browser to http://www.paulreddick.ca/ and see what else he has to offer. It’s a rich tapestry of work if this album is any indication.