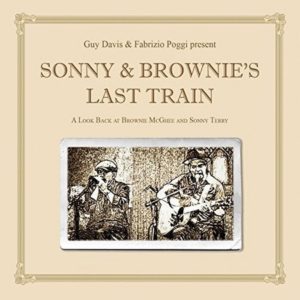 Recently, I had the honor to serve as the emcee for the First Annual RVA Brews and Blues Festival. It was an amazing event, and I was surrounded by so many good people on stage and off. I had a great time and look forward to being a part of it for many years to come.
One of the highlights for me personally was later in the day when I had a chance to just hang out with an old friend, Ivan Appelrouth. We’ve known each other for a number of years, going back to when we both worked for Country Artist Julie Johnson.
Appelrouth is a vastly underrated guitarist. He can summon up demons through his playing when he’s got his electric guitar plugged in – but lately his main love has been acoustic blues.
While we were talking, he brought up the fact that I had come to see his shows with him backing other performers – mainly Andrew Alli, but I never made the effort to see his solo acoustic shows.
He was right. And I didn’t have an answer as to why I hadn’t seen his solo work. I love acoustic blues, but it seems like that has become a forgotten part of the blues. A few days after that conversation I was reviewing Christian Coleman’s solo acoustic work for the blog, and it whet my appetite for some more old-school folk blues.
Fortunately, Henry and I had a copy of Guy Davis & Fabrizio Poggi’s recent release, Sonny & Brownie’s Last Train, and I managed to spirit it away to check out.
What a revelation it was to just hide out in my office when the rest of the world was sleeping and just enjoy these two masters interpreting the work of a generation past.
The title track opens the album. Sonny & Brownie’s Last Train is an homage to Sonny Terry and Brownie McGhee and tells a mythical story of them leaving this world for the next. Davis and Poggi both play harp and their playing is a beautiful complement to Davis’ storytelling vocals. It’s beautiful, poetic, and such a great way to be remembered.
Another lovely song, Louise, Louise, was written by Robert Penn Williams and Big Bill Broonzy. McGhee originally sang this in his own inimitable style and here it is beautifully reproduced. There will never be another Sonny & Brownie, but Davis and Poggi give us a wonderful version. They have the same heart and soul and it’s amazing how timeless this music is. What a treat to have it in our lives.
Sonny Terry was the songwriter behind Hooray, Hooray These Women Is Killing Me. While these sentiments have been expressed by a number of artists, Terry captures those feelings with a gleeful joy. It’s a delightful over the top celebration of the women who run our lives!
I don’t recall Sonny & Brownie covering the traditional song Shortnin’ Bread, but that’s not surprising. I don’t own all of their recordings, and it’s very cool to have these songs help open the door to all of the records I don’t know. 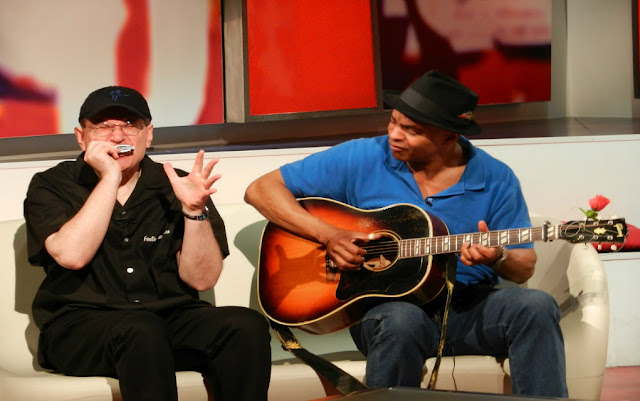 Next up is the Big Joe Williams tune, Baby Please Don’t Go Back To New Orleans, that has been covered by just about everybody who got behind a microphone. Guy Davis has been playing a lot of excellent guitar so far on the album, and this is no exception. He gives the song a decidedly swampy flavor – slow and hovering in the air like the humidity in a New Orleans’ summer.
Take This Hammer is also a traditional song, but it was popularized by Lead Belly, who often performed with Terry and McGhee. Poggi has been doing some great harp work throughout the album and has channeled Sonny Terry in most every song. That’s not an easy thing to do, but he manages to nail it every time.
The St. Louis Jimmy song, Goin’ Down Slow, follows. Davis takes command of the vocals and guitar while Poggi ups his harp attack. It’s a well-covered song, but a great rendition.
The wonderful Elizabeth Cotton’s Freight Train is next. One of my all-time favorite blues songs, it’s always a joy to hear it done by blues masters. Poggi’s harp is so sweet and Davis’ guitar sings. It’s a wonderful version and fairly close to Cotton’s original orchestration. I might have to play this one several times just to enjoy it.
Brownie McGhee’s Evil Hearted Me is a difficult song to write about. As Davis points out in his notes, on the surface it appears to condone violence towards women. However, he prefers to think that it’s, “a comical ditty recognizing the immature side of a man who needs sensitivity training.” I’m not completely sold on it, but that’s the interpretation they give the song. You make up your mind.
The traditional song, Step It Up And Go, is another one that has been recorded by just about everyone and their Uncle Jim. I don’t know that there has ever been a definitive collection of all the different lyrics to the song. However, it still holds up as a fun ragtime blues song and Poggi’s harp gives it a little more lift. Great number.
Brownie McGhee and his wife Ruth co-wrote the song Walk On with Terry. It’s a song of looking at the bright side even when the darkest times are around you. It’s a wonderful number and the kind of encouragement we all need to hear from time to time.
The traditional song, Midnight Special, was made famous by the King of the 12-String Guitar, Lead Belly. It’s the story of an urban legend that a condemned man’s life might be spared by the shining of a train’s headlight in his cell at midnight. Due to a bend in the track, it never happens. However, all that’s left is the everyday pain of living in prison. It’s a great rendition.
Sometimes, when I’m reviewing other artists, I use the term “blues purists” as a way of warning some of my audience who only want to hear the old-school style of blues. Nothing wrong with that. I want everyone to find the music he or she wants to hear most.
This album can be enjoyed by just about anyone who loves the blues, especially that old-school sound. The sweetness of the sounds on the album are only surpassed by the great affection that Davis and Poggi have for Sonny Terry and Brownie McGhee.
I can’t recommend this album highly enough. No tricks, no extended solos, just the purists of guitars, harps, voices, and a whole lot of soul. I loved this album so much, I hope that other master bluesmen (and blueswomen) will follow suit and pay tribute to those artists from earlier times who need to have their work re-done and introduced to modern audiences.

(I do not own the copyrights on the photos used in this article. If you do, and wish me to take them down, please notify me and I will comply.)
Posted by John at 6:28 AM