John Mayall – Talk About That 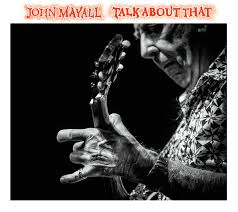 It’s no exaggeration to say that without John Mayall’s influence, today’s blues landscape would be vastly different. His drive and passion are exceeded only by his ability to spot and nurture talent. I can imagine that “nurturing” might have included a bit of irascibility, but Mayall long ago decided whatever tool gets the job done is the one that has to be used.
Mayall is at that stage in his career when he could be taking it easy, just sitting in his rocking chair and yelling at kids to get off his lawn, but instead, he’s still working in the studio grinding out albums, including his latest, Talk About That.
Using the talented musicians from his last album and tour: Rocky Athas on lead and rhythm guitar; Greg Rzab on bass guitar and percussion; and Jay Davenport on drums and percussion. Mayall himself supplies vocals, Hammond organ, piano, keyboards, harmonica, and guitar. Special guest Joe Walsh plays Lead guitar on two tracks.
Mayall also serves as the writer or co-writer of eight out of the album's eleven tracks.
Mayall starts the album off with a touch of funk on Talk About That. It’s his take on growing older and he doesn’t really care about what other people think and how he’s doing as he pleases. It’s got a great keyboard break.
He follows up with It’s Hard Going Up, a song written by Bettye Crutcher, the legendary STAX writer. Once again, he’s using the piano to drive the song but now he’s added some sweet horns to the mix. This is a classic and I can’t wait to share it on Time For The Blues.
Joe Walsh makes his first appearance on lead guitar on The Devil Must Be Laughing. It’s a slow driving number that makes the most of Walsh’s pyrotechnics. Mayall’s voice is in good shape and there seems to be evil dripping from every note. This is the longest song on the album, clocking in at nearly seven minutes, but it’s incredibly powerful and moving. I don’t usually play songs of this length on the show, but I think I need to make an exception for this track.
He follows up with the raucous Gimme Some Of That Gumbo. Utilizing a Bo Diddley beat and some zydeco stylings, this is one fun number. Love the horns and the interplay with the piano. This has got to be a lot of fun when they do this live and get a chance to stretch out and jam a little bit.
They keep the fun going with Goin’ Away Baby, by utilizing Mayall’s facility on the harp. The song was originally done by the great Jimmy Rogers and has a real country flavor to it. Davenport’s drums are subtle and very effective.
Joe Walsh returns for his second turn on lead guitar on Cards On The Table. The song has a little swing action happening and continues with a little country flavor. Walsh adds a nice touch to the song on his break.
A powerful number, I Didn’t Mean To Hurt You, follows. The pace is slower, more deliberate, and Mayall finds the emotion in every note. It’s a quiet cut, one that makes the listener commit to engaging in the song, rather than assaulting the senses. Showcasing a little big band flair, Don’t Deny Me, swings with horns and piano and good lyrics. It’s got a classic feel, Mayall is in good voice and I have to believe that this one could be a lot of fun when done live.
There’s a nice jazzy feel to Blue Midnight. Sometimes I forget that Mayall is a great proponent of blending blues with jazz to create a great sound. Here, the song is stripped down to the essentials and the electric piano makes a unique sound. The rhythm section of Rzab and Davenport are in good sync and Athas’ guitar lead is very good. Like this one a lot!
The follow up song, Across The County Line, is credited to all four members of the band. It’s a rollicking fast paced run through of a fun song. Can’t beat the feeling that this song brings – once again using the horn section on top of one of the hardest working bands around. Athas’ break is great, and it’s no secret that Mayall finds the best guitarists to work with.
The album ends with You Never Know, another jazz blues number. The tempo is bouncy and the lyrics are those of a man who has had a rich full life not so much looking back, but looking ahead to what’s coming up next. It’s one thing to remember the past, but so much more important to look ahead to the future.
True to that sentiment, Mayall reminds us that he’s not ready for the dustbin just yet. He’s still finding new talent, writing new songs, and making albums that can still kick some ass. Last year, Mayall hit the road to celebrate and promote his previous album, he just might have a few more tricks up his sleeve for this one.
If you want some more information about Mayall and his appearances, be sure to go to http://www.johnmayall.com/ and find out everything about the man and his music. Henry and I were fortunate enough to catch him live last year, and you can read my take on his performance here.