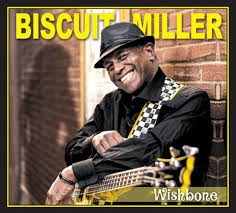 Since I decided to get a little more serious and consistent with my blog reviews, I’ve gotten more material making its way to the station and eventually my desk. Good! Keep ‘em coming all you blues artists looking to spread your wings.
Not sure how Biscuit Miller found me, but I sure am glad he did. I was aware of some of his accolades as a bass player and knew that he had toured with Lonnie Brooks for about ten years, but other than that, not so much. Turns out he played at both of Bill Clinton’s Inauguration Balls in 1993 and 1996, as well as performed with one of my favorites, Son Seals, in a documentary of Seals’ life.
If anybody has a copy of that, I would love to see it.
Anyway, I digress. The point is, Miller’s been around the block once or twice but somehow our paths haven’t crossed until now when a small inconspicuous package showed up on my desk with the disc Wishbone inside and a little bit of artist information.
I was working on another project, so I popped the disc into the computer, hit play, and pretty much forgot about that other project as I wound up listening to the entire album. Miller has assembled a good group of musicians for Wishbone, including Myron “Dr. Love” Robinson on drums; Bobby Wilson and Alex “Southside” Smith on guitars. Miller plays bass and handles the vocals.
He also wrote all twelve songs on the album.
The opening song, which just happens to be the title track, Wishbone has a strong soulful groove. The keys are prominent and the drums and bass drive the song. The guitar work is good but spare and the horns add a nice touch. Especially the sax break. Good start.
The guitar really comes to life on the follow up song, She Likes To Boogie. This is a fun song that just might make you want to get up and shake it just a little bit. It’s a good party song that is bound to show you a good time…
Miller’s vocals kick off Down At The Mississippi, an old-school bluesy number with a pulsing bass and swinging harp. The harmonies are tight and the song utilizes several popular blues tropes – drinking, devils, crossroads, the blues themselves. Fun song. I’ll be playing this one on Time For The Blues.
Ronnie Baker Brooks makes the first of two appearances on Mr. DJ. The song is a slow meditation with the singer asking for another blues song. You can feel the emotion deeply and the quiet musical arrangement adds to the power of the pain. Very nice guitar work.
Miller and Company follow up with a swinging number, Lay It On Down, with tight keys and some funky percussion. Miller’s voice is good and handles soul with the best of them. His bass work is impeccable and I’m sure he’s got to be a great performer to catch live.
The band kicks off with a raucous opening to the next song, Shake It Like Jello. Your mind’s eye can just see the dancers in the background moving and grooving to it. The horns build and add their stamp to the song trading off with the guitar. I’m not sure if it’s Wilson or Smith on the break, but whoever it is – he’s smoking!
Ronnie Baker Brooks makes his appearance on the very cool Bottle Of Whiskey, Bottle Of Wine. This is some serious hard-driving blues with just enough rock to push it into overdrive. Robinson’s drums get a real workout. I like this song a lot and will definitely be programming it into the show.
Miller uses a more deliberate tempo on Use To Love Me, and the blistering guitar hooks you quickly. This is a very strong blues soul song that has already been programmed into an upcoming show. Miller’s voice is very expressive in this song and it’s a very strong number.
The band gets to swinging on One More Mile, with some solid sax work leading us into the song. It’s a good “travelling all day” song that conveys the singer’s eagerness to get to his baby’s house. It’s a joyous number, one that just makes you feel happy.
The next track, Monday Morning Blues, uses an organ to set up a little gospel flavor for this poor schmuck who is facing yet another Monday with everything going wrong. I think we can all identify with the sentiments of this song. Watch out for that coffee spill!
Let’s Go Fishing is a gentle song with tight harmonies and a quiet acoustic guitar leading us into the world of the song. This is probably the most atypical song on the album, but Miller’s voice takes on a softer quality for this sunny afternoon of a song.
The album concludes with Going Home, which features Uncle Jesse Hutson on the song. Like the previous song, it starts out quietly, acoustic guitar, tambourine, harp, and harmonious voices blending nicely. This has all the earmarks of family and friends gathered together in the living room or front porch and just taking turns playing all the old songs. It’s very sweet and a nice way to bring this soulful album to a close.
I greatly enjoyed Wishbone and while I had heard of Miller, had never really heard his work. This was a good introduction to his low-key style, his solid bass playing, and his expressive voice. I wish I could tell you who played the piano, organ, harp, and horns on the album, but unfortunately that information is not on the press materials that accompanied the album.
I’ll try to find out and amend this review at that time. In the meantime, do yourself a favor and check him out. There’s a reason why he’s won those awards and I think this album would look good in just about everyone’s collection. You can find out more about him at http://www.biscuitmiller.com/index.html.