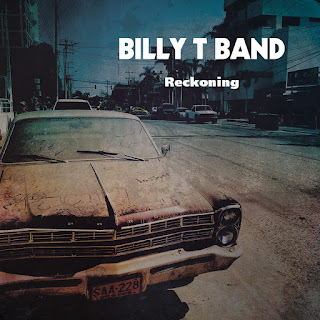 Recently we’ve been getting quite a bit of soul music in and a few albums from the Scandinavian countries. It was only a matter of time before the law of averages came true and we received a soul album from Scandinavia.
Enter the Billy T Band, who hail from Norway, and who make great music. Their latest release, Reckoning, has just recently been released here in the United States after having been available for some time in Europe. Billy T, aka William Troiani, is American by birth, but who moved to Norway and has been pursuing his music ever since.
Troiani has been a big part of nurturing blues musicians in Norway, including the likes of Amund Maarud and Kid Anderson, who has been playing with Rick Estrin & The Nightcats.
Aside from Troiani on lead and backing vocals and bass, the rest of the musicians on the album include Haakon Hoeye on guitar, rhythm guitar, organ and backing vocals; Ian F. Johannessen on rhythm, lead, slide, and wah way guitars; Robert Alexander Pettersen on drums; Martin Windstad on percussion; Kasper Skullerud Vaernes on tenor sax; Kristoffer Eikrem on trumpet; Isa Caroline Holmesland, Tara Terese Waaler Waervagen, and Lise Voldsdal on violins; Marius Roe Navik on viola; and Kaja Fjellberg-Pettersen on cello. Other backing vocals were provided by Adam Douglas Enevoldsen and Elvy Elisabeth Vefall.
The album starts off low and sweet with the title track, Reckoning. We’ve been fortunate here to receive some beautiful soul music, and if this cut is any indication, we’re going to experience another album of gorgeous music that is high on emotion and connections.
The only song on the album not co-written by Troiani, Shame Shame, is next. It too is a lovely throwback and the horns and bass give it a very cool Chicago sound. It reminds me of some of the old Atlantic tracks when they were distributing some of the best soul music around.
The follow up with the harder edged On Your Own, a song with a distinctly country blues vibe. The guitar slices through the song and the lyrics are strong. Lonely highways are one of the great American musical motifs, and it works here with this band from Norway. I guess the music truly is universal.
We’re squarely back in soul territory with Sad Man. This is a lonely song; the emotions are low even if the music is high. Troiani’s vocals are good and convey his feelings well. Nice guitar break.
One Of These Days starts off with a slow acoustic guitar, the song is stripped down to its essentials. Listen to the lyrics and you just might find this to be a good blues song. I especially love the way the other instruments are brought in just for emphasis during the first part of the song, and the backing vocals are very strong. Good song.
Congas bring us into the next song, Gone, along with choppy guitars reminiscent of the great Isaac Hayes and his STAX partners in crime. The strings add to the sentimental feel of the song. Things pick up with the up-tempo It Ain’t Right. This is a good number to get the audience up and moving around. A little social justice adds gravitas to the song.
Love Is Gonna Get You starts off with sweet instrumentation, almost a California cool sound. The bass line is strong, and Troiani’s vocals blends beautifully with the backing vocalists. This is one I could have heard on any of the soft rock channels back in the day. That’s not pejorative, this is a song that could very easily be a hit if people got the chance to hear it.
We get a dose of funk in our soul with the next number, Trouble. When you listen to the lyrics, you’ll see his blues background as this one deals with the most fundamental blues subject – trouble. All the forms that trouble takes in our lives, we all got ‘em, and this song is a good way to trot ‘em out and send them packing.
They bring the album to a close with I’ve Been A Fool. The organ intro and the slow feel of the guitar creates a gospel meets rhythm and blues vibe and it’s so good. This is a great way to end this album, slow and sweet and full of soul.
Obviously this is not a typical blues album, and that’s okay with me. While I love the blues deeply, I love to listen to many other genres and I am attracted to artists that explore these other genres and incorporate them into their sound. The Billy T Band does soul extremely well, and they have a nice touch with both funk and country.
However, the roots to all of these songs belong to the blues. The subject matter, the expression in the lyrics, even the musical lines are all derived from the blues. I enjoyed the album very much and even though there may only be a couple of songs that end up on Time For The Blues, there’s no reason the album shouldn’t end up in your collection.


I’m not sure when or even if The Billy T Band will be making the rounds in the states, so I’ll have to rely on our European friends to send us dispatches if they can catch them live. Otherwise, feel free to check out their website at: http://www.billytband.com/ to find out more about this – or any previous – release.
Posted by John at 9:00 AM