Leon Russell Passes Away at 74 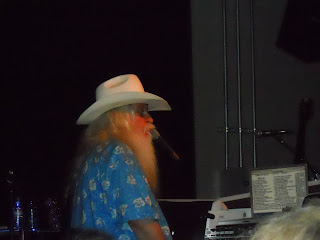 I am devastated by the news that Leon Russell has died. I have been a fan of his for many years and was fortunate enough to see him on several tours – sometimes in large Coliseum venues but more often in smaller intimate places with a couple of hundred like-minded fans.
He never failed to deliver a fantastic show. His piano playing combined elements of country, gospel, jazz, blues, and rock and his gravelly voice was perfectly suited for hard rocking, enthusiastic shouting – but it was also wonderfully seductive.
After being a background player for years, he burst onto the performing scene on his own. He appeared on the Madison Square Garden stage for George Harrison’s A Concert For Bangladesh and pretty much stole the show. With his trademark Top Hat (later changed to a white cowboy hat to be true to his Oklahoma roots) and his barrelhouse piano – Russell rocked hard.
He also put together the band for Joe Cocker’s Mad Dogs And Englishmen tour in a mere 10 days, with himself as the anchor. Russell became a co-star as he provided vocals for several of the songs and he kept the hard partying group on point. Just recently Derek Trucks and Susan Tedeshi put together a tribute to this great show and included as many of the original members of the band as possible. Once again, Russell served as the anchor. During his more recent concerts he told a few stories and performed the closing number from the show. It was the kind of moment where you felt like crying and giving a standing ovation at the same time.
It was on that last tour that my wife and I saw him at The Tin Pan in Richmond, VA. An intimate venue that seats about 200 people, it was the perfect place to see the man whose music I had long admired. We were within 15 feet of him and had a great view of his back and side. For two hours he took us on the magical journey of his career, offering bits and pieces from his major works, and some of the best selections that might not have been hits but were still amazing undiscovered gems.
Unfortunately, Russell’s health has been precarious over the last several years. He underwent a five-and-a-half-hour operation to repair a brain leakage and he had a heart attack this past July. On that last tour, he used his cane and still needed assistance from one of his players to walk to the stage.
But seated behind his piano, he was in total command. His shoulder length silver white hair and beard accentuated his weathered face, and the music that he was able to summon transported his die-hard fans to a different place and time.
For those of you who were lucky enough to see Leon Russell live, you already know what I’m talking about. For those of you who missed that opportunity, no words will never be enough to give you that experience.
Thank you, Leon, for the music, the memories, and the love you shared with us all. You will live on in our hearts.

For the full review of the Leon Russell concert, please check out: http://professorjohnnyp.blogspot.com/2016/03/legendary-leon-russell-rocks-tin-pan.html.