David Burgin is Back and It’s No Money Down

I’m at an age now where I don’t trust my memory like I used to. Once upon a time I could easily memorize liner notes and knew all of the musicians that played on every album, and now I’m lucky to remember what I’m supposed to do on any given day.
So when Facebook suggested I should send a friend request to David Burgin, that name sent off a faint bell in my brain. I sent the request immediately as we had a couple of hundred friends in common AND his picture showed him playing a harmonica – so I immediately knew we needed to connect.
Turns out, he’s a very cool guy and he had an album about to be released. He sent me a copy and almost as soon as I put the CD into my player and I heard those few notes, it came flooding back to me: this guy played on at least a dozen albums in my collection!
A little bit of research and I turned up that Burgin had worked with the likes of Harry Chapin, Jerry Garcia, Johnny Cash, Maria Muldaur, Amos Garrett, Roy Rogers, Sammy Hagar, Colin James, k.d. lang and many more.
As a session player, Burgin wasn’t limited to one particular style. While he did most of his best work in the blues, he had successfully worked in rock, country, folk, and roots music as well. Then he just disappeared. He was completely out of the music business, which is why he was off my radar, and now he was back with a new CD and I was looking forward to listening to a guy whose harp work had influenced my own.


Opening up to the credits I saw that Burgin had assembled a tight group of musicians, many of them friends of his for 30 plus years, that included Roy Rogers playing slide; Kevin Hayes on drums; Jim Pugh on keyboards; Volker Strifler on electric and slide guitars and National Steel; Danny Caron on guitar; Gene Houck on bass and harmony vocals on one song; Kirk Harwood on snare drum for one song; co-producer Allen Sudduth on guitar, percussion and the arranger for Desert Horizon; Marvin McFadden on trumpet; and Rob Sudduth on tenor and baritone sax.
Burgin provided the vocals and played diatonic, chromatic, and bass harmonicas.
Just Your Fool starts things off on a swinging note. It gives Burgin a chance to do a little old school crooning and the band is tight in a cool honytonk vibe. The guitar break is fun and the overall feel is that the listener is in for some fun.
It seems only logical that a musician who spent years in the auto industry would release a song called Greaseful. The piano is a nice launching pad for Burgin’s harps to come in with a jazzy feel. This instrumental is great traveling music and a great showcase for Pugh’s keys.
The Willie Dixon classic Live The Life I Love is next and Burgin and company infuse it with deep respect for Muddy Waters with their interpretation. It seems obvious that the band is expressing their own feelings towards the music and each other. I’ve always had a soft spot for this song and this is a nice addition.
Next up is a short piece titled Theme For an Un-Filmed Movie. I can visualize it working perfectly as a traveling piece while folks drive through the South. Or swampy land. It’s evocative and I would love to hear it expanded.
The women who love and encourage us deserve every good thing we can offer. In Kathleen Kinda Blues, Burgin offers respect for the woman who stands behind him. It’s a slow, very bluesy number that speaks volumes about the times and tribulations that they have spent together. Very cool. And sometimes there are just no words that can adequately represent how we feel – but the music does it nicely.
The traditional tune Black Cat Bone gets a slight facelift and Strifler’s guitar work plays well off Burgin’s harp and vocals. This is the first of his songs to play on Time For The Blues, but it definitely won’t be the last. It’s a very solid blues tune with a strong backbeat. If you ever hear him play it live, you’ll be in for a real treat.
The horns come out for Mississippi Mojo, a Chicago style blues song that expands the sound just a little. Burgin growls his vocals slightly and calls the roll of some of the greats that have made the blues the magical sound that we all love.
As I mentioned earlier, Burgin is not a slave to just one style of music and uses his musicians to explore other genres and somehow makes them all come together for his unique sound. His affection for the blues runs deep, but is not exclusive. He finds several different ways to express the music in his soul.
For example, Chillin’, the next song is a breezy kind of summer tune that might have played on AM radio back in the day alongside the likes of The Turtles. Yet it has some very subtle European undertones and would be right at home on any album by the likes of virtuoso jazz players.
The title track, No Money Down, is a down and dirty blues with a strong harp riff that pulls you into the song immediately. Talk about growling, Burgin digs deep for these vocals. This is Chicago style at its finest and plays into America’s love for our automobiles. Cars mean freedom and we love our freedom. We also love our metaphors, baby. Very cool song. 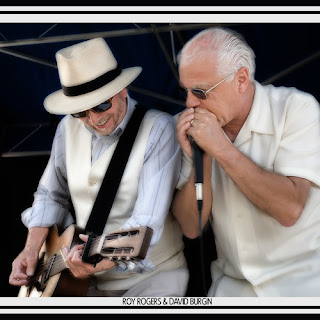 Years ago, Burgin and his musical partner Roy Rogers released a song called Country Thing. Now that they are together for the first time in years, they’ve returned to that song with Country Thing 2.0. It’s a fun jaunty number that features nice interplay between his harp and Rogers’ guitar. You can just hear how much of a good time they were having recording this.
Next up is a nice swinging number, My Babe. It’s got a solid beat and the guitar jumps in and out as do the keys for a little emphasis. The drums and bass get a good workout and this is another number that would really rock when performed live.
Thirty Days is a fast boogie number that hooks you quickly and keeps on driving. It gives me a good west coast vibe and rocks from the first note to the last. Just try not to move when listening to this song. I dare you.
The final song, Desert Horizon/Amazing Grace, is an homage to Burgin’s good friend Norton Buffalo. The harp is strong at the beginning and the band is tight. Just as everything builds to a climax, Burgin brings in some vocals that evoke his friend and the song slows down into his harp playing the plaintive classic Amazing Grace. You can’t help but have a tear in your eye for Buffalo. It’s a beautiful song and a fitting way to end the album.
Welcome back David Burgin! You and your colleagues have put together a kicking album that mixes styles with ease and grace. Nothing about the album seems forced, the writing is tight and the execution is first rate. It’s pretty safe to say I had a great time listening to it – and I’m going to have a better time playing it on Time For The Blues.
If you’re interested in finding out more about Burgin, head over to http://www.davidburginmusic.com/   and check him out. Or just stay tuned as I have a little interview with the man following this review.

John Porter: Your new album, “No Money Down,” is a real kick ass piece of work. How was it re-uniting with friends and collaborators that you worked with years ago?
David Burgin: In all cases it seemed like we had never stopped playing together. The only cat on the record I had not had the pleasure to play much with was the drummer Kevin Hayes.
John Porter: You and Roy Rogers made a powerful team at one time. Is this project the first time you worked together since then?
David Burgin: It was the first time we had been in the studio together in well over 30 years.
John Porter: What was the catalyst behind “No Money Down?”
David Burgin: I guess it was mostly a “legacy” thing. I have a friend in Ohio who sent me all of the old tunes I had recorded. If it weren’t for John Flynn and my Pal and Co-producer Allen Sudduth, I may not have attempted the project.
John Porter: You use a variety of styles on the album. How was it exploring these different takes on the album?
David Burgin: I have always enjoyed exploring various musical style, even back when I was a fist call session player. With playing sessions, you never knew what was going to be thrown at you so I learned early on how to adapt and play many genres. The cool thing was that the sidemen on the recording could play anything I threw at them and then some!
John Porter: What harps do you generally use to achieve these styles?
David Burgin: I mostly play Hohner Marine Bands and the occasional Chromatic 260 by Hohner as well as a Hohner Bass Harp. I have experimented with Seydels but really don’t like the plastic comb thing.
John Porter: Who were your musical influences?
David Burgin: Man, there are a ton. Obviously Roy Rogers in the early days, but I really listened to a good deal of R&B cats like Junior Walker. Additionally, guys like Elvin Bishop the legendary Amos Garrett, country music guys I played with like Johnny Cash and Merle. Of course I ran the table listening to Muddy, Walter, and Junior Wells too. I did however STOP listening to harmonica players somewhere in the mid-70s…
John Porter: At one time you were the go-to guy for harp for a variety of artists. Yet you gave it all up and got into the business world. Can you describe why and what that was like for you?
David Burgin: Initially it was a large culture shock. Too many crazy road trips, unscrupulous record companies and just general burnout all affected the decision.
John Porter: Do you have any plans to get on the road and play?
David Burgin: Maybe the occasional Festival or sit in. I do not relish the thought of enduring “Band” drama again…Been there done that.
John Porter: You dedicate the album to your old friend Norton Buffalo and even play one of his compositions. Was that an emotional experience, and how did you approach that one song?
David Burgin: All who heard the finished product including yours truly had a tear in their eye. Norton was beloved friend… Allen Sudduth did the arrangement, Al Garth (Eagles, Loggins and Messina) wrote the charts.
John Porter: What is your philosophy of music, and how do you go about working to support it?
David Burgin: