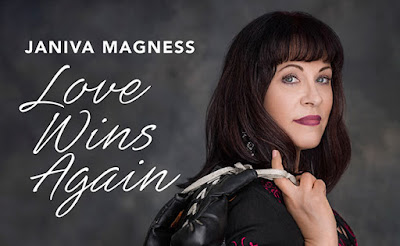 From the first time I heard her music, I’ve been a fan of Janiva Magness. The depth of her vocals, her ability to connect with the darkness of emotion appealed to me very much. Her sultry delivery didn’t hurt, but it was that ability to plumb the depths of her pain hooked me for life.
Let’s face it, the blues can drag you down if you don’t watch out.
But as we’ve talked about recently, the blues’ power is in the transformation of pain into happiness – that by confronting those past demons we are able to transcend them and come out whole. Even if someone has done us wrong, the music is the philosopher’s stone that brings us out of darkness and restores us to the light.
With this album, LOVE WINS AGAIN, Magness has declared that she has moved more into that light and has found a way to stand stronger against the forces that have opposed her in the past. It’s a brave statement and a great album.
Magness has written or co-written five of the eleven songs on the album and worked with producer Dave Darling to craft a piece of art that brings hope that we too deserve happiness and a place in the sun.
She is backed by some great musicians including Matt Laug on drums; Gary Davenport on bass; Arlan Schierbaum on piano and Hammond organ; Phil Parlipiano on piano’ Alfredo Ballesteros on sax and backing vocals; Dave Darling on guitar, bass, and backing vocals; Zach Zunis and Garret Deloian on guitars; Ismael Pineda on percussion; Brie Darling on backing vocal and percussion; and Bernie Barlow, Gary Pinto, and TJ Norton providing backing vocals.
She kicks off the album with the title track, Love Wins Again, a bouncy number that hooks you quickly. It’s optimistic, upbeat, and promises good things for the future. It’s a joyous number and a great way to start the CD.
Magness gets a little funky on Real Slow, which exhorts us to “Take your time. What’s your rush?” It’s a fun number that has a little ‘70’s feel to it.
Things slow down with When You Hold Me, a sensual number that has that late night lovers feel. Magness’ sultry low voice is seductive and promising. It’s the kind of number best listened to while holding someone you love close and you can be lost in the emotion.
Magness picks up the tempo with Say You Will, a request for someone to be there during the toughest of times. It’s nearly impossible to face those times without someone being behind you to offer support.
Doorway has an ethereal feel to it, it’s a song that clearly falls outside of traditional blues. It has more of an alt country feel, but it’s so emotive, so evocative, that I don’t care. It’s a very moving song and Magness’ voice is nearly angelic. Love this song.
It may be an often used metaphor for how we are attracted to the things that can destroy us, but Moth To A Flame is another good song. There’s a bouncy funk in the music and there is a strength in Magness’ voice.
Magness picks up the tempo with Your House Is Burnin’, a jump swing song with a strong back beat that will get the audience up and moving. The lyrics are a warning to get up and pay attention to what’s going on around you, but the music is fun.
She slows things down with Just Another Lesson. The song recounts the aftermath of a situation and how the things we go through form the life lesson that we will understand later. They are rarely easy to learn, but it’s the painful lessons that stay with us the longest.
Things stay slower with Rain Down, another powerful song that takes us through the bad times and those trouble that just seem to rain down on us from time to time. But we can escape those times, we can persevere and come through to the other side. Magness’ voice aches during this number, she reminded me of the best of Joplin’s vocals. There is a lot of power in this song.
She takes John Fogerty’s Long As I Can See The Light, and makes it seem like it was written just for her. Some journeys take us out for miles while other journeys take us inward. It’s a nice selection and has a little gospel tinge which the piano greatly adds to that flavor.
The album concludes with Who Will Come For Me, an almost mystical number of wondering what we can do as time runs away from us.  As we age, is there someone who will come for us and bring us some form of happiness and love? It’s a very brave song.
While Magness has been a blues singer for her whole career, with her last album, and especially with LOVE WINS AGAIN, there is a shift in her approach. Blues emotion certainly still dominates her vocals, but you can hear other influences and almost a completely different voice. She has power that only comes from claiming her own soul and the direction she is moving in now is deeply personal.
Perhaps I am reading more into her personal journey than I should – after all, music is often the mirror by which we are able to see our own lives. If so, this album touches me deeply and moves me. It may not be traditional blues in the sense of structure, but that is one of the great things about music – it doesn’t have to. All it really needs to do is connect with us and we will follow it on our own journey.
If you want to see what Magness is up to, or to find out if she’ll be appearing anywhere near you, I suggest you head over to http://janivamagness.com/ for all the details.