Blind Lemon Pledge Takes Us On A Pledge Drive 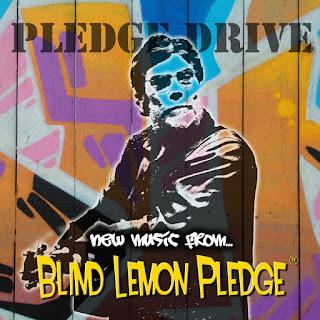 As you may know, Henry Cook and I co-host a blues show heard on Richmond VA’s public radio station and from time to time we take a little break to ask our good listeners to call in their pledge of support to the station. It helps us keep the lights on, our bills paid, and we even get to take a few shekels home so we are able to feed the family and put a little gas in the car.
It's not an aspect of the job that generally makes us thrilled, but it’s part of the job and an effective way for Public Radio to stay in contact with our audiences. If you are not already a member of your local Public Radio, I urge you to send them a check before all the radio conglomerates buy up whatever remaining stations there are and give you no choice in the music that comes out of your radio.
I just recently received a CD titled PLEDGE DRIVE from a gentleman sporting the moniker of “Blind Lemon Pledge.” Cracked me up the first time I read that. At first I wasn’t sure if this was for real, or maybe a parody act like Weird Al Yankovic, but when I remembered that Weird Al can actually play, I thought it would be fun to listen to.
After popping the CD into my player, I quickly realized that this was no parody act, but an old school sounding homage to an earlier, more gentle sound that still had some edge to it. It’s a fascinating album that may not be to everyone’s taste, but I enjoyed it very much and look forward to finding his previous albums and checking those out as well.
Pledge, or James Byfield as he goes by on his driver’s license, has been using that name since 2008 or so and has worked with a number of the best musicians in the San Francisco areal. Of course San Francisco is a hotbed of creativity and artists who push envelopes so I would expect that his journey would be interesting as well.
While he usually surrounds himself with great players, Pledge has written all twelve of the songs on the album, and handled all the instruments himself except for Jenny Reed on harmonica and Rick LeCompte on saxophone.
The quick tempo of Run John Run, kicks off the album at a frenzied pace. Immediately I was intrigued by his approach even if I was having a hard time putting any kind of label on the music. He’s got a Bo Diddly beat anchoring the song.
Things are a bit more mellow on Moon Madness, a nice drum, piano, harp combination with some cool gravelly vocals. It’s a cool sound and while there are more instruments used, those main three carry the bulk of the music. Reed can definitely play and her harp adds a lot to the song.
The next song, Nag Nag Nag, is a jaunty big band sounding number. Even Pledge’s vocals sound more like crooning than blues, but the song still has a nice feeling to it. LeCompte brings out the big saxophone for a solid break.
Pledge slows things down for the beautiful Cora Lee.  This is a song of great emotion and even if it doesn’t use a pure blues format, there is no mistaking that deep feeling. Great song.

Birmingham Walk is an unusual song that sees Pledge overdubbing his voice to create the sound. He’s using different guitars to get a grittier sound. Definitely more experimental than most of the songs on the album. Still, he’s got some great lyrics that put a new twist on an old problem.
He picks up the tempo with the hard rocking 5 Weeks Of Heaven. He’s got an early Kinks sound happening here and it’s not bad at all.
We’re at the half way point of the album and Pledge is reminding me of Elvis Costello’s early approach to his album. He mixes and matches his style on every song, finding different sounds, and not being afraid to experiment, even knowing that it may not appeal to everyone.
Plus, his songs generally run about three minutes each. They’re quick and it forces him to find the story quickly. This is not always a bad thing. It keeps us guessing and if we stumble onto a song that doesn’t catch our fancy as much as another, it’s quickly ended and we move on to the next one.
Even when I am not as enamored by one of his songs, I find his attitude and approach refreshing.
Now we go old school with She Broke The Ten Commandments, a power ballad once again utilizing Reed’s harp to underline Pledge’s electric guitar. The lyrics are strong and definitely fall into the blues category.
The slow late night feel of You Can’t Get There From Here gives Pledge a chance to show off his crooning chops. I’m always attracted to these kinds of songs and Pledge does a great job on this one. This song should be getting some air play.
He breaks out the ZZ Top-inspired funk for O Katrinah, a driving number with a real swampy feel to it. Of course that’s the perfect feel for a song dealing with the devastation of that awful tragedy. Another great song.
More funk follows with the old school sounding You Know You Really Got The Blues. Pledge adds a little slide (or possibly pedal steel) to the mix and it anchors the sound. This would be a great song done live and has to be a crowd pleaser.
If you’re thinking this might be the Beach Boys hit Kokomo, keep guessing. This is more blues with a twist. Anybody who has ever received less of a check that anticipated can identify.
The album ends with Railroad Mama and Reed’s lonesome harp mixed with some good guitar work. Pledge even plays the spoons to give it that absolute stripped down feel. I have to confess, having grown up around a grandfather who worked the rails for years, I have a soft spot for just about any railroad song, and this one is a lot of fun.
There are several albums that Pledge has put out prior to PLEDGE DRIVE, and none of them are currently in my collection. I plan on rectifying that situation quickly. I don’t know how much he tours outside of the Bay Area, there are so many venues just around San Francisco, that I’m sure he’s working most of the time. Still, you never know.
If you want to discover this unusual talent, you can find out more at his website: http://www.blues.james-creative.com/ as well as pick up those earlier CDs. Definitely marches to his own six-strings and well worth checking out.