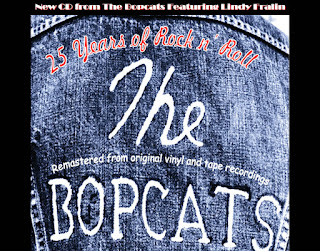 I can’t even remember the first time I saw The Bopcats. It had to be sometime in the ‘70’s (the decade, not my age thank you very much) when I was running around working for one band and watching as many others as I could. They were one of my favorites and it was all because of the unique sounds they produced.

No filler, no covers of the same songs everybody else did; these guys managed to be true to the rockabilly sound and drove crowds into frenzies.

Eventually I became friends with a couple of the guys and always enjoyed running into them later in life. Of course bands evolve and change and sometimes they disappear over the horizon for a while, and then out of the blue, they’re back, and each twang on the guitar, each shuffle beat on the bass and drums, brings you a little bit closer to where you were all those years ago.

When I put on the new CD from EllerSoul Records, The Bopcats: 25 Years of Rock ‘n’ Roll, I erase a bunch of years and I’m suddenly a young man again. I can’t promise you’ll feel the same, but I love this album and will be playing it over and over.

One quick note, many of these songs were band demos, they used to send to promoters in order to get work. You’re going to want to showcase your best stuff, and for The Bopcats, their signature was fast hard moving rockabilly. That sometimes causes one song to blend into the next. Not much in the way of ballads on the CD, so that makes it sound a mite repetitive. Consider yourself warned.

Oh yeah, the album quickly jumps out of the gate with one of their 11 originals, I Don’t Want To Be Alone. The band moves into darker territory with Dark Train, a story of a woman leaving and the effects it has on her man.

Next up is a quirky bar song, Who Drank My Beer, a Dave Bartholomew tune that the band makes its own. It’s a refrain I hear from time to time around the Juke Joint and I still can’t believe someone would pull such a heinous crime on a fellow drinker.

Broke Down is another solid tune with Lindy Fralin trading guitar licks with Gary Fralin’s keys. Jimmy Maddox adds a fun sax riff and the band jam sounds like a band that’s more at home playing live than in the studio. All I Need sounds like it came out of the roadhouse honky tonk. And that’s a good thing in my book.

Cars are always a big subject for rock ‘n roll and Wheels of Mine is a good driving song. Pun intended… The Bopcats follow up with That’s Right. Crazy Li’l Baby is another band original that showcases Lindy Fralin’s guitar work.

Red Cadillac is a nice slower number and has a stripped down lineup. It’s a nice addition. They tackle the Stones Ventilator Blues and pull it off nicely. Remember, the Rolling Stones were heavily influenced by the blues, and the blues were a big influence on country and rock, the mix responsible for rockabilly. Not a big leap then, for the Bopcats to grab one of the Stones’ earthier numbers.

Like many fans of Americana music, I consider Dave Alvin to be a giant and he commands great respect. Here the band does a version of his Marie Marie that rocks the place hard. (Just bragging here, but the Professor once got to introduce Dave Alvin at a show. He seemed to like it when I introduced him as “The King of California.” But maybe I was just giddy to be hanging with the man.)

We’re back with a couple of band originals next. Sweet Thing features some nice keyboard work from Gary Fralin and sax work from John “Sparky” Otte. Life of Crime is a nice dark number and it creates a great mood. The horn section adds a nice touch.

Jenny Jenny continues the darkness with a Link Wray inspired opening and the song gets under your skin quickly. They tackle Johnny Cash’s Get Rhythm with abandon next. The Chuck Berry inspired On A Roll is next and the band is in high gear.

The CD ends with The Race Is On, a more plaintive number. It’s a decent song, but I think I would have moved it up one spot and ended on On A Roll, but hey, that’s just me.

The one problem with this CD is that it’s not a “live” show. The Bopcats were all about the show – their energy increased as the audience became more alive and raucous. No studio album could ever hope to catch them like a live show did. But it’s a good start.

Fortunately for the musical world, The Bopcats are still rocking out up and down the road. If you don’t believe me, check out their website and catch a show. You’ll become a fan as quickly as I did.
Posted by John at 12:00 AM