Sean Ardoin Reminds Us He CAME THRU PULLIN’ 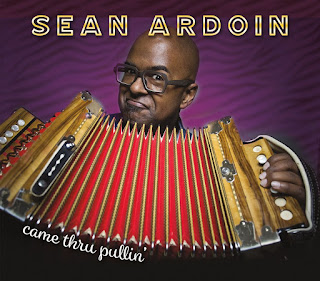 Two-time Grammy © Award nominee Sean Ardoin is a descendent of zydeco royalty. A member of the Ardoin family who claim Amédé Ardoin, the Father of Zydeco as a relative as well as Alphonse “Bois Sec” Ardoin and Lawrence “Black” Ardoin. In fact, Lawrence is Sean’s father and Sean could not have had a better musical education.
As I’ve opined before, each generation takes the music it inherits and makes it their own. No music exists solely to be a museum piece. Music is meant to be played and played with. Blues, country, jazz, rock, and just about every other musical genre you can name evolves, so why shouldn’t zydeco?
If you can keep a secret, I actually love zydeco, even if I don’t get much of a chance to listen to it. I have a handful of albums and I tend to pull them out when I’m thinking about Louisiana, or when it gets near Mardi Gras. The sound of an accordion fires me up, and I bought two washboards to play along when I can.
So, lets’ get to Ardoin’s latest album, Came Thru Pullin’. If that title sounds familiar, it’s because Ardoin has chosen ten songs he’s recorded previously to put a new spin on them with his new band. Grab yourself a Po’ Boy and a café au lait and let’s get to listening.
He starts off the album with the title track, Came Thru Pullin’, and if I thought this was going to not have any blues on it, let me tell you that I was very much mistaken. This song opens up with a hard-edged bark before Ardoin rocks out with his accordion. I was moving all around in my chair bouncing to this song. Yeah, I’m going to slip this one into an episode of Time For The Blues toot suite!
Ardoin follows up with Bounce, and if this song doesn’t make you put down your Po’ Boy and dance, you better check your pulse mon chere! Every note, every syllable gets into your soul and transports themselves into your feet and you can’t help getting up and shaking what you got!
Ardoin’s accordion gets a real workout on the next number, No That Ain’t Right. It’s not quite a mellow song (real understatement), but it’s not quite as raucous as the previous song. Don’t let that stop you, the lyrics could easily make a great blues tune. Another strong song.
If there is such a thing as Psychedelic Zydeco, then Get Right Girl definitely falls into that category. Mix that cool accordion with some electronic whooses, a nasty hook, some processed vocals and a little ‘70’s soul thrown in and you get this song. It’s fun, it’s freaky, and it makes you sit right up.
I’m Not Gonna Wait utilizes keys and strings to open up the song. That’s quickly followed by a haunting melody and more processed vocals. It’s a sad song of lost love and could easily be an R&B number. It’s a little unexpected, but I love to hear artists take chances. My guess is you’ll like this one a lot, or scratch your head wondering what the heck is going on?
With a title like Gumbo Time, I definitely had a style of song in mind and Ardoin took me in a different direction. Yeah, his accordion was there, but it was more hip hop than what I thought it would be. This one’s more for a younger audience than I represent, but he’s really shaken up expectations. Not a bad thing.
A little more R&B Zydeco follows with It’s Love. Ardoin is pushing boundaries on this album and I will confess that while I find his approach interesting, sometimes I have to play a song a couple of times to really get into it. This song has great harmonies, and it’s reminiscent of some of the ‘70’s Soul I used to listen to late at night.
Creole Rock and Soul opens up Kool Rolling, and this is a rocking track that’s going to get you up and moving. The lyrics are alive and delivered in a rapid-fire manner. I think this one is a true crowd pleaser and I hope to catch Ardoin live some day so I can see the audience’s reaction.
Some more keyboards open Nothing Like Our Love, and the song takes a pleading style before picking up the tempo. Ardoin’s accordion is a background instrument, adding just a touch of spice to the song, not taking so much of the spotlight. An interesting choice.
He brings the album to a close with a hard rocking Shut Them Down. The song’s got a lot of energy and makes a great closing number, getting the listener up and moving one more time. I think this one could pop up on Roots Americana Shows easily and I, for one, will enjoy it on my own personal playlist.
I’m not an expert on Zydeco by any means, so please take these opinions for what they are, just my thoughts on a very cool artist whom I want to hear more from. I’ll be looking for some of Sean Ardoin’s earlier albums, but in the meantime, I’m going to enjoy the heck out of Came Thru Pullin’. I hope you will as well.
Find out more at his website.

**HOLD THE PRESSES**
Sean Ardoin has released a beautiful song called What Do You See. Simply put, it’s the most gorgeous and emotional song I have heard all year. If this song doesn’t melt your heart, you really need to examine your beliefs. Please go to the link below and spend four minutes and change listening to his voice and some lovely piano.
What Do You See

Eric Hughes Sends Us a POSTCARD FROM BEALE STREET