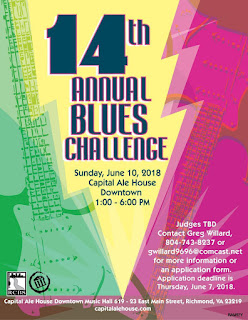 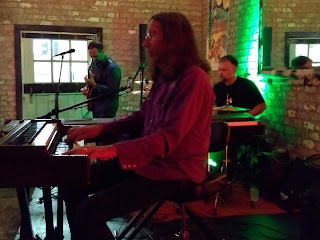 Sometimes you go a while without seeing any great concerts and then out of the blue your favorite barbecue joint brings in two world class performers in one week. Such was the case this week as Buz & Ned’s Real Barbecue in Richmond’s west end brought in Jason Ricci on Tuesday and now Bruce Katz on Thursday.
The Bruce Katz Band is out on the road supporting their brand new album Get Your Groove. How brand new? The band just got their copies this week and are playing them live for the first times since recording the album. Katz is also appearing on three cuts for local band (and one of my favorites), RC And The Moonpie Band. Stay tuned for more details.
Keyboard wizard Katz is joined for this tour by guitarist-vocalist Chris Vitarello and Ray Hangen on drums. The trio form the nucleus of the new album and together they are an extremely tight combo that shift directions on the almost imperceptible nod of the head from Katz. When speaking to Vitarello during the intermission, he acknowledged this by commenting, “You really have to be on your toes when you play a Bruce Katz show. You can’t phone it in.”
The band started off with a great version of Hesitation Blues and immediately the audience started nodding their heads. The crowd that gathered in Buz’ backroom for the show were definitely in the mood to enjoy great music and they were quickly under the band’s spell.
Their second song was one of Katz’ original instrumentals, Rush Hour, and it had a solid funky jazz vibe. If you aren’t a fan of jazz or instrumentals, this show probably wouldn’t be your cup of tea. This was just the first of several such numbers and last night’s audience gobbled them up like candy.
From there, the band launched into a great Leroy Carr song, Blues Before Sunrise, which featured a great Honky Tonk piano solo from Katz to kick it off. Katz played off of two keyboards, one was strictly for that barrelhouse piano sound and the other for the rest. When he made that slight turn, it was almost like he became a different person – a rocking demon as opposed to the cool jazzman.
The demon was definitely unleashed on this song and its follow up, Stand Back. After the band received its due applause (and it was strong, loud, and sustained), they played the title track from the new album and then an instrumental from the previous album, Out From The Center.
Katz returned to the piano for Don’t Feel So Good Today, and his left hand was so powerful that it sounded like they had a bass player taking over during the song. This was a solid rocking number that got the crowd worked up. They followed with two instrumentals from the new album, Zone 3 and their tribute to Butch Trucks, Freight Train.
Both Katz and Vitarello played with Trucks and they were.all close friends. It was a beautiful moment that took us to intermission.
They came back from intermission with a Vitarello original, The Bun, before revisiting the new album with Shine Together. This was the first time they played that song live and Vitarello had to have a lyric sheet nearby in order to get it right. (He got it very right, by the way.) The song also featured the first drum solo by Hangen.
Next up was Make Things Right before performing a great cover of Drowning In My Tears by Ray Charles. Someone in the audience called for a Billy Preston song, and Katz and Company responded with a hot version of Will It Go Round In Circles which actually got most of the remaining audience on their feet and shaking everything they had.
They brought the evening to a close with one last new instrumental, Beef Jerky, and ended on a tight version of T-Bone Walker’s T-Bone Boogie.
Often when a performer reaches a high level of mastery, people say that he or she is “pushing boundaries.” I’m not entirely convinced that I can say that about Bruce Katz and his band, not because they are not on that level but because I’m not sure they HAVE any boundaries. They are equal parts rock-blues, jam, jazz, and probably a few other genres I missed.


While I enjoy their albums, there is absolutely nothing like seeing them live. It was an absolute pleasure to hear their work and see how they interact with each other and the crowd. Keep your eyes peeled to see if they are playing anywhere near you. Whether it’s a big venue or your favorite barbecue joint, don’t miss this show!

(Photo by Jessica Wood. Used by Permission.)
Posted by John at 12:44 PM No comments: 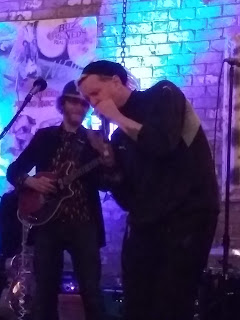 There are many musicians who are proficient with their instrument, some who are masters, and only a few who seem to inhabit it and make it truly a part of their soul. Jason Ricci is one of those rare few. He plays the harmonica with a blazing passion and intensity that puts him at an elite level – a level that has been marked by the many awards he has received for his talent.
The latest performance of this EllerSoul recording artist at Buz & Ned’s Real Barbecue in Richmond’s West End, his third in approximately 18 months, was a tour de force that rocked the house from beginning to end.
Speaking of Buz & Ned’s, they have recently renovated their back room with a larger stage area to go along with their excellent food. The space is intimate and the audience is right on top of the performers, so it’s impossible to have a bad seat. For future shows, the seats go fast, so plan ahead and don’t wait to purchase tickets.
Ricci was backed by three New Orleans performers with added vocals provided by his wife Caitlin. His guitarist, John Lisi, has been his friend and co-conspirator for years. The two play off each other with playful precision. Bassist Eli “Andy” Kurtz and drummer John Perkins form a powerful rhythm section that creates a deep pocket that gives Lisi and Ricci a lot of room in which to play.
The foursome started off their show with a cover of Led Zepplin’s Going To California with some very sweet harp and slide guitar. The instrumental gave the band a moment to establish their mastery before segueing into their next song, Big Ole Broke Down Buick, that featured Lisi on the lead vocals and steel guitar.
Ricci took over on the vocals for the third song, Sleeping On Biscuits, which gave him a chance to connect with his audience. It seemed obvious that something was off and he was agitated this evening. However, he seemed to have no trouble channeling whatever frustrations he had into his art and his harp playing and vocals were tight.
He followed up with a slow blues number, If I Hurt Myself, that was among the most powerful of the night. He and Lisi teamed up on an exciting harp-guitar trade off and at one point the group brought the sound down to a quiet tic toc rhythm from the drums and an almost muted guitar before building it back to a thundering crescendo.
They transitioned into a fun and funky number, I’m Too Strong For You, which included a solid bass run, and a discussion with the audience about how the band had driven 15 hours from Rochester, arriving just before the scheduled show time tonight. Along the way they encountered a “Virginia Black Bear crossing the highway,” and had to spend time in a fruitless discussion with their insurance company.
To emphasize their frustrations, Lisi pounded his guitar like it owed him money. 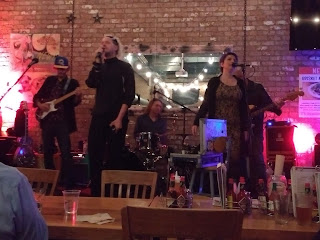 With barely a pause, they moved into the next song, Terrors Of Nightlife, which featured Caitlin on backing vocals. This song featured some of Ricci’s best lyrics and showed that he’s one of the best songwriters around. With Caitlin still up, the band played New Man before transitioning into one of my favorite songs the band performs, Lou Reed’s Walk On The Wild Side. Ricci usually extends the song for a bit, but tonight he trimmed it a little so he could get to the intermission and pour some coffee into his system.
After the intermission, the band returned with a cool instrumental version of Mercy Mercy before moving on to the funky 5-1-5. With a fresh infusion of liquid caffeine, “black, like our souls,” Caitlin returned to the stage to sing back up on an amazing song, Demon Lover.
Ricci describes the song as being about opiates and French women. It is a freeform descent into hell that starts out with some disjointed jazz notes creating the atmosphere before Ricci starts to channel Jim Morrison and sing from the darkest parts of his soul. Demon Lover is an extremely powerful song that left the audience speechless before erupting into applause as the song ended.
Ricci pulled himself from his trance and quipped that was from his album, “Darker Side Of The Moon.” According to his latest rate sheet, it’s gone Triple Aluminum in Luxembourg.
Lisi took over the vocals for the next song, giving Ricci a moment to compose himself. The band rocked on with his song, My Mama’s Gonna Yell At You When You Get To Heaven, and then moved into a hot version of Baby, Please Don’t Go, with some nice Golden Earring licks tucked in for fun.
After that, the band ripped into a jazzy instrumental, Where Da Words. Ricci then declared he’s been, “trying to play a harp like B.B. King for 25 years,” before moving into a softer blues number, Driftin’. The song builds to a good exchange between Lisi and Ricci and has a strong ending.
Ricci is a trickster in many ways. It’s close to impossible to get through one of his performances without the twinkle in his eye glowing brightly. It became more apparent as he worked the crowd through the introduction of the next song, Chops Are Rollin’. After that song, he told us that the band has been out on tour for “17 million years,” and this was the last night. As they were heading back to New Orleans, they played a song to honor the New Orleans Saints, Who Dat Nation. While the band was obviously having a great time, some of the audience, not being fans, got quiet and they quickly brought the song to a close.
An audience member yelled out a request for “one country song” and the band obliged with their rendition of Everything I Do Gonna Be Country. At one point, Ricci even channeled Charlie McCoy riffs on the harp. They did a passable version showing off their versatility.
Following up, the band closed with Don’t Badger The Weakness, a tribute to all of those who struggle with mental disease including depression and addiction.
The show lasted over two hours, closer to three, and the band never wavered in its intensity while still maintaining their fun level. Ricci is a consummate harp player and The Bad Kind is a tight rocking band that honed its versatility chops playing in New Orleans on a weekly basis. If you can handle a raucous NOLA crowd for five or six hours at a time you can handle just about anyone.
The net time Ricci comes to Richmond, or if he comes anywhere near you, do yourself a favor and get your tickets the minute they go on sale. You’ll be glad you did.

(Photos by Jessica Wood and used by permission.)