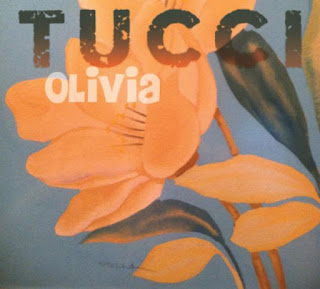 Sometimes when bands are dealt a bad hand, they fold, cash in their chips and move on. Others step back, take a deep breath, and try to get back into the game. Tucci, who was previously known as the Toler Tucci Band when they were fronted by the late great Dan Toler, is back with a brand new album, Olivia, their first since Toler lost his battle with ALS.
Toler, who worked with the Allman Brothers Band and the Gregg Allman Band, cast a large shadow, but the rest of the members of Tucci have continued to band together and have released a very cool rock blues album that has plenty of funk and fun, and could just be one of those great sleeper albums that sneaks up on you and leaves a lasting impression.
The members of Tucci include Steve “Doc” Tucci, the leader, guitarist, and lead vocalist; Michael Tucci on drums; Harry DeBusk on bass; and their website lists Dan Mark on sax, but he’s not listed on the album. I’ll need to do some clarifying research and update the review.
Special guests include Larry McCray on guitar and vocals; Dan Toler on guitar on what is most likely his last recorded work; Shawn Murphy on backing vocals and sax; Donnie Richards on B3; Ira Stanley on slide; Dan Ryan on keys and B3; Al Owen on vocals; and Bob Dielman on guitar.
All songs on the album are attributed to Tucci as the songwriters.
The album starts off with High Roller, and Larry McCray is in the spotlight. There are some serious guitar pyrotechnics firing off. It’s a good way to open up the album. The blues are strong and this should be a most satisfying disc.
Next up is the title track, Olivia, with some funky blues. Richards’ B3 gives the song some backbone and the band is having a great time on the number. The guitar break is a killer and this song really rocks.
They follow up with I Don’t Need It, a slower, more controlled number. McCray is in strong voice and this has a great Chicago feel to it. Listen for the interplay between guitar breaks and the B3 break and you can tell that the band has got a great sound.
Gimme Some Of Your Love gets off to a rocking start. There’s some great soul driving the number even with the rock rhythms in the music. It reminds me of the sounds coming out of STAX in the late ‘60’s. If there was ever a title with which I could identify, it’s Overtaxed Blues. Aside from the monetary element, how many of us are pulled in too many directions? Aren’t we all overtaxed? This might be the first blues song to ever mention Obamacare by name.
As the band is based out of The Sunshine State, it’s only fitting that they release a number titled, Hey Florida. It’s a state that has seen plenty of its native sons and daughters go on to great things, and it is certainly a musically diverse territory. There’s some great guitar in this song and some very cool percussion as well. It’s a smoking number!
Leaving town on a bus, car, or train is a significant motif of the blues, so it’s only right that Tucci drops a song called, Train Blues. And this one is a great addition to the train songs from the past. Enjoy it, the guitar work is stellar.
The next song, Without You, takes a slower approach giving us some blistering guitar and more of Larry McCray’s deep emotive vocals. I could see this song as a showstopper number for the band with the singer pouring his heart out in front of a band that is working hard. The guitar breaks are exceptional and it’s a great number.
Dan Toler is featured on the guitar for Play By The Rules. It’s another strong blues tune with a slow hand playing the guitar. The vocals are sweet and heartfelt and this is a number that should be getting airplay – it’s full of emotion and some great guitar work. Excellent number.
They follow up with You Hurt Me, a solid blues number with some of Larry McCray’s best vocals. This uses some of the best blues motifs – being hurt by the person who loves you is the basis for some of the best blues songs ever recorded and this one really drives it home.
The last song on the album, Third Eye, is also the longest at a shade over 12 minutes. It reminds me of the way so many bands would stretch that last song into an extended jam when they were in front of a live audience. Everybody takes a lead and steps into the spotlight as a way of taking a bow. This is a song with some very interesting poetry in the lyrics as we take a trip through the metaphysical – a different track from the other songs on the album. A very interesting way to bring things to a close.
If you’re looking to put a label on Tucci, you might be hard pressed. Blues, certainly, but there are also elements of rock, funk, psychedelics, and a few others that I can’t quite put my finger on. They blend them all and create a unique sound that is sure to get a great response from their audience.
Olivia is a fascinating album. I love their musicianship, and they are very generous with their special guests.  I checked out their website, http://www.tucciband.net/, looking for more information about them and found some interesting things, but unfortunately there was not much listed for their upcoming shows. I don’t know if they don’t want to tour or if they are taking some time to work on a new sound without Toler.


I’ll be checking back often to see if they leave Florida and head out on the road. If you happen to catch them, please write up a report and send it my way, I would love to include it with this review. So would lots of other blues fans!
Posted by John at 12:00 AM