The Nighthawks ~~ All You Gotta Do 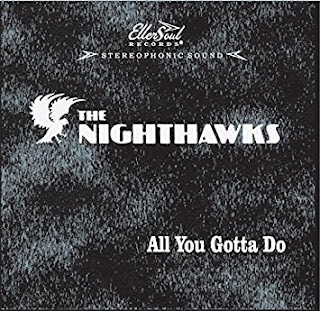 I’ve been a fan of The Nighthawks for many years. I’m talking going back to high school, and if you could see my long silver hair, you would realize that high school was several decades ago. In those pre-driver’s license days that meant bus rides to and from Richmond to Washington DC and walking or taking a cab to the venue. Not to mention carrying a fake ID in order to get into the club.
Then I had to do it all in reverse and get back in time to sneak into the house. I’m pretty sure my parents knew something was up, but what the hell, I was on the honor roll and never missed a day of class, they never said anything.
Why would I travel so far in order to catch a band? In a couple of words, they rocked! The Nighthawks had and amazing energy that would get under your skin and give you a thrill that would last for hours or even days.
Over the years I saw the band go through many incarnations and the present lineup of Mark Wenner on harmonica; Paul Bell on guitar; Johnny Castle on bass; and Mark Stutso on drums – and everyone sings – stacks up against their best lineups of the past.
They have just released their latest album, All You Gotta Do, on EllerSoul Records, the Richmond-based label that has been bringing out some great music from the likes of Jason Ricci, Reverend Billy C. Wirtz, Joe Stanley, The Mike Henderson Band, and of course Li’l Ronnie and the Grand Dukes. The Nighthawks even recorded the album in Richmond, the same as Ricci and Wirtz did for their latest albums.
The opening track, That’s All You Gotta Do, is a flat-out rocker and the band delivers a raw blend of rock and blues with rockabilly to create enough power to light up the East Coast. Not to mention any dance floor within a two-state radius. Great song, and a great way to start the album.
Next up is a good version of Larry Campbell’s When I Go Away. The song was originally written for The Dixie Hummingbirds and has been covered by a number of bands since, including Levon Helm and The Grateful Dead. The Nighthawks give it a mournful feel and Wenner’s harp adds a touch of poignancy to the song.
Willie Dixon’s Baby, I Want To Be Loved follows, and the band pulls out all the stops to recreate the Chicago Chess sound. Since they all pretty much grew up on that sound – or at least it was on their radar – they are able to duplicate almost perfectly. Good version of the song!
Next up is Randy Newman’s Let’s Burn Down The Cornfield. It’s a slower, intense number that seems to swell up from the bottom. Castle’s bass is powerful and menacing and Bell’s guitar summons up a demon’s hiss. Great song and very bluesy, although not in a traditional sense.
The next couple of songs were actually written by members of the band, starting with Johnny Castle’s Another Day. It’s a solid rocking number and Castle takes the lead on the vocals, allowing Wenner a chance to blow the harp throughout the song. It’s a song of urban paranoia – or the truth…
Mark Stutso’s VooDoo Doll follows. It’s a slower number but it still has some swing to it. If you’ve ever felt like there’s somehow out there who is manipulating you, causing everything to go wrong, this is the song for you!
Sonny Boy Williamson’s Ninety Nine is next and Wenner really shows why he is one of the best harp players working today. Don’t take my word for it, please listen to any of the songs in their repertoire, or check out the albums where he has guested and I think you will come to the same conclusion. This is a great interpretation of a well-known blues song and a real highlight of the album.
Three Times Your Fool starts off low and slow and Wenner uses his harp to simulate a horn section. The vocalist reaches deep into his soul in order to find the emotions needed to sing this song. It’s a very moving number of the heartbreak variety.
Jesse Winchester’s Isn’t That So is the next track and the band gives their blues a dark country feel. It’s the kind of song that moves you and stays in your soul for a good while.
The next song, Snake Drive, is written by the tandem of R.L. Burnside and Kenny Brown. I like the way those guys write and this song is a lot of fun to hear. I’m not sure what to call it, maybe an “instrumental with words” or a “semi-instrumental,” but I get tired of labels, just give it a listen and see if it moves you.
Mark Wenner wrote the instrumental Blues For Brother John using the old French lullaby Frère Jacques as a starting point. It’s a jazz blues number that may have grown out of some jamming, however it came to be, it shows Wenner at his best – and trust me, that’s pretty damn good.
They close out the album with Ed Cobb’s Dirty Water. Cobb was a great musician and producer who passed away in 1999. He wrote the song for The Standells in 1966 about an experience Cobb and his girlfriend had by the Charles River in Boston. The Nighthawks get gritty on this song and capture that garage rock sound perfectly.
Like I said at the beginning, I am a fan of The Nighthawks and have been waiting patiently for All You Gotta Do to arrive on my desk. It was worth the wait and I guarantee that several songs will be featured on Time For The Blues shortly.


You don’t have to wait any further. You can get the album in all the usual places, or you can visit their website at http://www.thenighthawks.com/ for more information about purchasing the album or seeing where they will be playing next. You can also find EllerSoul Records at their website, http://ellersoulrecords.com/ for information about their other acts.
Posted by John at 11:00 PM