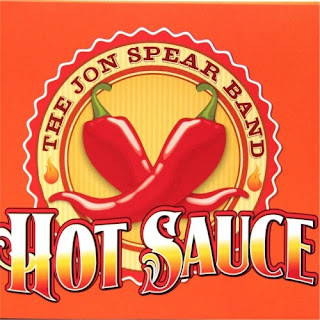 I’ve been a fan of The Jon Spear Band for longer than I’ve been their friend. So, this may not be the most unbiased review you’re ever going to read, but it will be truthful. As much as I like these guys as people and performers, I also hold them to a pretty high standard since I know just how well they play.
Their latest album, Hot Sauce, just arrived, and I know it’s already been getting some air play around the country. I would expect nothing less. Their previous albums, Old Soul and Live Music Is Better, garnered a lot of critical acclaim and brought them a lot of new fans.
Time For The Blues wasn’t the only program to extoll their virtues; there was a host of other shows and stations that quickly latched on to their music. And if you haven’t listened to them yet, I hope that you will and discover for yourself their sweet old-school sound.
The Jon Spear Band consists of Spear himself on rhythm and lead guitars and vocals; Dara James on lead guitar, harp, dobro, and vocals; Andy Burdetsky on bass and backing vocals; and John Stubblefield on drums and backing vocals. As a band, they have no problem sharing their stage and spotlight with friends and other high-quality players including Nate Brown on congas; Ron Holloway on sax; Matty Metcalfe on accordion; Butch Taylor on keyboards; and backing vocals by Yolonda Jones and Nathaniel Star.
Band members wrote or co-wrote all of the songs on the disc.
The album starts off with a very swampy number, Bottom Of The Bottle. It morphs more into a rock song, but the lyrics are straight blues, and they keep coming back to James’ slide. It’s a strong song and promises that the band is going to deliver throughout.
There’s a Caribbean feel to the next song, Geographical Cure. It’s a gentle island breeze, and the lyric goes, “there’s a change coming, that’s for sure.” I was told that this album might take their music in different directions and this is a strong indication that that statement is the gospel truth. It might not be blues, but it’s a good song and one that’s going on my private playlist immediately.
The next song rocks with some roadhouse boogie. Really Great Gig is a lot of fun and swings, and I bet that it will get the audience out of their seats and up on their feets. Yes, I know that’s bad grammar, let it slide. I love the story in the middle of the song, sure beats a rap…
Next up is the title track, Hot Sauce. It starts off at a slow pace with some great sax and a blistering guitar run. The bass line really packs a punch and this is a very cool blues number. It’s strong, solid, and a real crowd pleaser.
The following song, Noah’s Blues, uses a traditional blues format, but the addition of the congas gives it a different feel. Listen for the guitar break, it really smokes and this is a fascinating song using the Noah story as a look at current environmental issues. Good work guys.
Pierre Jourdan starts out with a swampy bouncy guitar/dobro effect. It’s definitely old-school and the dobro adds so much to the song. Nothing like a tale of gambling to get the blues fans interested. Love the accordion and the story as well.
The band gets a dance groove going for Hit The Quarter. Sometimes you just want to move and the chorus comes from an old joke I heard once about learning how to dance by bumping your hips to hit coins suspended from a string. Made me smile and want to dance a little…
There’s more swinging on Butt-Dial Kyle. We all know those folks that have a great cellphone but don’t have a clue as to how to work the damn thing. Kyle is one of them, and this is a song about the consequences of not being able to control yours.
Wintertime starts out slow and with the drummer using brushes to give the song a softer sound. It almost feels like the snow is falling outside throughout the song. You can feel the emotion in every note in James’ vocals as well as his lead guitar. This one is very powerful and I can’t wait to see the band play it live.
The band picks up the tempo for Blues For A Soldier. The lyrics deal with contemporary, but universal, themes of having the blues for someone in harm’s way a long way from home. Taylor plays a B3 and it gives the song some serious backbone. The drums and bass add a military touch and a whole lot of power.
At one time, the title Cheap Whiskey And Stale Cigarettes could have been applied to my life. It’s a ballsy soul song that reminds me of some of the great songs that came out of Detroit back in the day. I don’t mean the Motown sound, I’m thinking of the rough-around-the-edges blues that distinguished Detroit as an underrated blues town.
Spear and Company bring it all to a close with Natchez Burning. It’s got an otherworldly flavor to it – there’s a touch of swamp magic, and the rhythmic stomping adds to the mystical nature of the song. This is going to be one that will appeal to some, maybe not to all, but for those that like it are going to like it a lot.
There are some different sounds on Hot Sauce, for sure, but there’s plenty of great kick ass blues as well. I climb up on my soap box from time to time about how artists need to explore the directions their music takes them. In this case, The Jon Spear Band shows that they can hold their own in other arenas.


I hope you will make the opportunity to discover them on your own. Now, with three strong albums behind them, there’s a lot to take in. Check out their website at http://www.jonspearband.com/ to sample music and to see where they will be playing. For those of you in Richmond, make sure you catch their show at The Tin Pan on July 22. I’ve got my tickets, I hope to see you there!
Posted by John at 2:11 PM