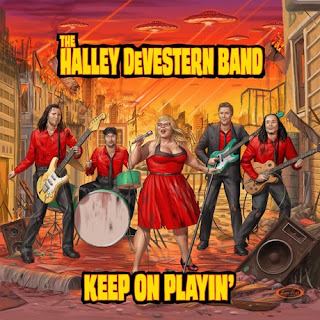 I rarely comment on album art work, but the art and graphics for The Halley DeVestern Band’s new EP, Keep On Playin’, was done by Les Toil, and it’s smoking hot. So many reds, oranges, and yellows set the mood for a band that is absolutely on fire.
Let me tell you, this is not a smoldering fire, this is a five-alarm blaze of funk and blues. Halley DeVestern has a big voice in a tiny world and she uses it like a flame thrower. Oh my great God, she can flat out sing. She’s joined by some stellar musicians including Tom Heinig on bass and backing vocals; Rich Kulsar on drums, percussion, and backing vocals; David Patterson on guitars, keyboards, and backing vocals; and Steve Jabas also on guitars, keyboards, and backing vocals.
All of the songs on the EP were written by the tandem of DeVestern and Heinig, except for the title track, which was written by the entire band.
Starting off an album – or even an EP – with the title track is a tricky proposition. However, Keep On Playin’, has some strong blues funk and within a few notes I find that I am enjoying DeVestern’s vocals and can see why she has gathered comparisons to Janis Joplin and Etta James. She’s got a sharp edge on this song and her band is kicking serious ass behind her. Oh yeah, this is one ride I’m going to enjoy…
The follow up with Time For You To Light Things, with some of the funkiest riffs since STAX’s heyday. If this doesn’t make you want to get up and shake it a little bit, well, I’m sorry because this kind of funk is contagious. Listen to Heinig’s bass because he gets into a groove and rocks it. Two great songs right off the bat.
The next song, Bangin’, actually has a nice mellow groove despite a name that suggests it would be loud and raucous. Speaking of suggestions, the lyrics are fun double entendres that add some delicious adult spice to the album. DeVestern’s vocals are sultry, smoky, seductive, and sexy as hell. I’m not sure if it’s Patterson or Jabas who plays the guitar break, but whoever it is does a great job.
The band starts off in a pop vein on Song In You, but quickly switches back to their funky rock specialty. Honestly, it’s hard to find a band that delivers funk as strongly as the Halley DeVestern Band. And if I can make that statement after only four songs, I can only imagine what they could do with a two-hour showcase somewhere. Sure would like to find out though…
They close the album out with Hit Twice, a blues number that should make just about any lover of that hard Chicago sound happy. The guitar snarls with dark menace and the percussion adds just the right touches to the song. DeVestern rips through the song with a ton of confidence and even has some fun with a little purr that emphasizes the power of the song.
I think it’s safe to say that Halley DeVestern and her band have won me over. I am a fan of blues, but I also have a soft spot for funk, soul, and all sorts of related music. The Halley DeVestern Band delivers on all those fronts and pack more punch in five songs than many bands do in fifteen.


Keep On Playin’ is an aptly named EP as I wish they would keep on playin’ for another couple of hours. Guess I’ve got to pony up my allowance and see if I can get my hands on any of their other releases. If you are as interested as I am, join me at http://www.halleydevestern.com/, to see what we can find.
Posted by John at 11:09 PM