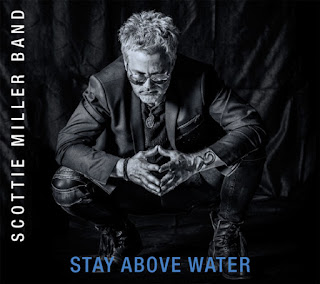 I was in a bit of a hurry when I opened up the Scottie Miller Band’s new independent release, Stay Above Water. Didn’t know anything about them and didn’t take any time to read about them, just put the CD in my player and started listening.I would have sworn they were from the South. Couldn’t quite pinpoint exactly where, but with their heavy swamp piano, I was figuring they must be from near New Orleans. So you could knock me over with a Telecaster when I learned that they were from Minnesota, and not even SOUTHERN Minnesota. Guess it just goes to show you that great blues music is universal and you play what you love.
Miller has been kicking around the music scene for a good while and even spent some time with the legendary Bo Diddley. That has to have been quite an education. Miller is a great keyboardist and can handle several different styles with ease. He also adds a mandolin to the mix, which occasionally gives the band a true old-time feel, like those great old string bands that came up out of the south.
He’s joined by Mark O’Day on drums and percussion; Patrick Allen on guitars and vocals; and Dik Shopteau on bass guitar and vocals. Special guests include three-time Grammy nominee Ruthie Foster adding vocals to Keep The Good Thing Going, as well as a horn section made up of Larry McCabe on trombone, David Eiland on tenor sax, Scott Snyder on trumpet, and John Croarkin on baritone sax.
Miller is a prolific songwriter who wrote all twelve of the songs on the album.
They kick the album off with Burned All My Bridges, a rocking blues number that should be getting a lot of airplay. It’s a strong song with a good hook that should make just about any blues fan happy.
The next song, Keep The Good Thing Going, features some vocals from the great Ruthie Foster. She doesn’t take the lead, but adds some punch to the backing vocals and has a little bit of fun with Miller near the end of the song. The band shows that they can handle some funk as well as blues rock.
The title track, Stay Above Water, follows with a sweet swampy sound. Got to love that steel guitar sound and Miller sounds like he’s been living away from civilization for some time. O’Day gives the band a tight shuffle to keep things moving. Really like this number a lot, and I will be playing it very soon.
Miller starts off the next song, Falter, with some piano licks that are reminiscent of Dr. John. It’s plain that Miller can rock a piano with the best of them, and his vocals are pleasant and he can approach a song with gravely gusto or a gentle croon. I would like to catch him live to see how he interacts with an audience, but I’m willing to bet he’s damn good at it.
He follows up with Same Page, a song that has a little bit of a country vibe to it. Just shows his vocal versatility and Miller’s use of the mandolin adds a nice touch to the song. Good song, and he’s singing from the heart.
Miller and company decide it’s time to get funky with It Better Groove. Hey, when a band is working, chances are they aren’t putting on a nice polite concert somewhere, they’re in a bar with a big dance floor and they want the audience to get up and shake it a little. This is the kind of song that delivers on that promise.
Miller follows up that raucous number with the more introspective Guardian Angel. It starts out with just his voice and some simple instrumentation that underscores the power of the song. It’s a beautiful number and real departure from the songs that have come before.
After the previous heartfelt track, Miller and Company get funky with Circles. It’s a left turn from that song, and more in line with It Better Groove, but I’m glad they put a little distance between the two songs. Yeah, if you need to get your dance on, this is a song that should satisfy that urge.
There’s a bit of funk mixed with Southern Soul on the next number, It’s What You Do. The horn section is back and that baritone sax gives the song a strong backbone. This is a fun song and Miller’s piano adds that sweet old-school sound. Oh yeah, if you like your music mixed with some Mardi Gras, here it is!
Next up is a blues tune, Rippin’ & Runnin’, with some heavy organ mixed with some cool drums to create an unusual sound. The organ gives it a psychedelic feel and there’s a definite throwback vibe to the entire song.
The follow up with a slow burn of a number, Come Along, that utilizes Miller’s mandolin and some strong guitar from Allen. The lyrics are pure blues. Good song.
They end the album with the aptly named Goodbye. It’s a lovely quiet lullaby that underscores the difficulty and end of a relationship. The song makes the most of simple guitar and Miller’s vocals. There are strings underscoring the song and it gives it the most sentimental of feelings. It’s a beautiful song.
The Scottie Miller Band knows how to put together a good album that has some great blues, a little rock, a little funk, and some tenderness to soothe your soul. And all that in twelve songs. Stay Above Water is a solid album that should make just about every music lover happy.


Be sure to check him out at his place of the world wide web, http://www.scottiemiller.com/, to see what this strong performer has to offer. He may be from The Land Of 10,000 Lakes and a member of the Minnesota Blues Hall Of Fame, but for my money, he was probably switched at birth – you don’t  get Southern Soul like that from just anywhere!
Posted by John at 2:40 PM