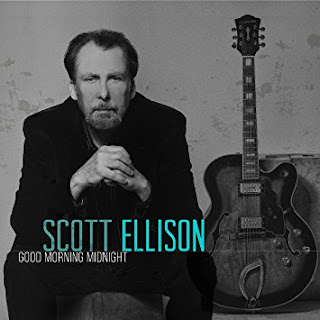 It was a couple of years ago when I got my first Scott Ellison CD, Elevator Man. I enjoyed the heck out of it and we played several cuts from the album on the show.
We didn’t hear much about Ellison after that, and that CD stayed on my shelf waiting for some new material to join it. Well, the wait is over, and I am happy to report that Ellison has released a monster of an album entitled Good Morning Midnight.
The album has got a lot to offer. Besides the great blues and blues rock that Ellison is known for, he’s also got some swing music, a big band instrumental, and one song that had me reaching for a tropical drink.
There’s some holy music opening the album on Sanctified. It’s got gospel fervor and some sweet backing vocals from Marcy Levy. The song has a good rocking beat and a hot guitar break. All in all, it’s a great way to open the album. Preach, brother!
Ellison follows up with some swing on No Man’s Land. It’s some fun music that will definitely make you want to get up and dance. His vocals have the requisite growl and his guitar sings just as much as he does.
Next up is Gone For Good, a slower blistering kind of number. With a title like that, you know you are heading deep into Blues Territory, and he delivers a great lost love song. You can feel the emotion in both his voice and his playing. Love this song, and don’t be surprised when you hear it on Time For The Blues.
The only song that Ellison didn’t have a part in writing, Last Breath, follows. It was written by fellow Tulsa bluesmen Steve Pryor and Scott Hutchison, and it gives the rhythm section a line that they can sink their teeth into. It’s a solid rocking blues song that should satisfy any fan who likes their music on the edgy side.
Next up is Hope And Faith, a bouncy number that seems to have an island rhythm in the percussion. If you’re looking for straight blues, you might be disappointed, but I like the direction he’s heading, and let’s face it, reggae has a lot in common with the blues. Artists have to push envelopes, so, give it a listen and you might find you like it.
I used to utter four words whenever things got tough at work. Ellison uses them as the title for his next song, Another Day In Paradise. Ellison makes this song a bouncing blues track that’s a lot of fun. Ah, yes, we all want that something that we don’t have – yet…
Another slow song follows with some great guitar work. You Made A Mess (Outta Me) features one of Ellison’s best vocal work and whomever is playing the B3 delivers some great keyboards to go along with the sweet guitar. I really love the control that this song exhibits and would love to see it performed live.
The title track, Good Morning Midnight, is next, and Elllison is back in a swinging mood with some good organ and harp work. It’s a good blues number, great lyrics and a vocal delivery that should satisfy the staunchest blues fan. I really liked this one a lot…
Ellison and Company get back to rocking on Tangled. It’s a good song with some nice slide and honkytonk piano driving it forward. It’s another song that I would love to see live, it sounds like it would be a real showstopper.
Next up is the lone instrumental on the album, Wheelhouse. It’s a true swinging sound – big band style. This is the kind of song that I love, simply because you don’t hear it very often and when you do, the results are sometimes lacking. They’re not lacking here brothers and sisters and if you can dig your blues with a jazz flavor, this is the song for you.
Ellison is back to straight up blues with Big City. He uses his guitar as a weapon, slashing through the music and his vocals have a razor’s edge. It’s a gritty urban song and one that pushes more than a few envelopes.
Got to love the percussion that sets the table for Mysterious. Ellison’s guitar and quickly steps in and carries much of the song, but it’s the rhythm section that gives the song its backbone. I like this one, and it’s got a great mix of some jazz with solid kick ass blues.
Ellison closes the album with When You Loves Me Like This. He’s got some swamp in his lyrics and his music and he plays it like he owns it. Blues lovers that like an edge are going to enjoy this song a lot and I think it might get some airplay. Jimmy Junior Markham’s harp is stellar and I wish it had been included on a few more songs.
Scott Ellison has a ton of talent. But he also has a certain intangible quality that sets him apart from the rest of the pack. He’s got a style that lends itself to blues, rock, jazz, as well as a little bit of country and reggae. Most of the time he’s a straight up bluesman, but he also throws in a few spices to mix up his musical mélange.


Good Morning Midnight is a welcome addition to the Time For The Blues library, and I am eager to share some of his music with you asap. If you haven’t yet sampled his work, I hope you will take a few minutes to see what his website has to offer. You can find it at http://www.scottellisonblues.com/, and keep a weather eye open to see where he’s going to be while on tour. If he comes anywhere near you, be sure to catch him!
Posted by John at 8:49 PM