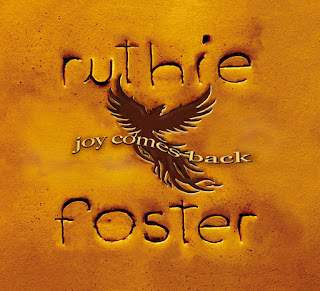 Have you ever found one of those artists whose voice just speaks to you in ways that most other artists can’t? For me, one of those artists is Ruthie Foster, the three-time Grammy nominated singer who manages to infuse her blues with gospel, R&B, and a whole lot of soul. Her most recent album, Joy Comes Back, released earlier in 2017, and it’s an album that once I sampled a few songs, I actually went to my favorite record store and ponied up retail price just to get it.
Foster proves the old adage that if you want people to really listen, speak softly. She doesn’t have the need for any bombastic songs – the ten songs that make up the album tend to be more mellow, but they still pack a punch. It’s a strong album, and for those who might not be familiar with her work, it’s a great starting place to introduce you to her sound.
Foster starts out with a slow introspective number, What Are You Listening To?. Her beautiful melodic voice is in perfect control and so expressive. On this song, she has such a mellow approach, this is the kind of voice I could listen to for hours at a stretch.
Frank LoCrasto’s keyboards open up Working Woman like a wake-up call. This song is a great blues anthem and an empowering one to boot. It lays out the fact that it truly is women that run the world (a sentiment I wholeheartedly support). There’s a ton of power behind the lyrics, but it’s not put out in an angry manner, just a song telling the truth.
For the title track, Joy Comes Back, Foster returns to the church that first nurtured her and helped give her direction in the musical world. It’s a glorious song of redemption and survival, and isn’t that a big part of church? Foster’s gospel approach is strong and radiates strength. She could fill a revival tent as easily as a large auditorium.
Foster herself wrote the next song, Open Sky. It’s a lovely number, more soul than blues, but she sings directly from the heart. The song is quiet and touches your heart in a gentle manner and lingers with you for some time. It’s already on my playlist, and I’m sure it’s going to stay on there for quite a while.
The next song, Good Sailor, is another quiet song that builds some great imagery. I love the poetry of the lyrics and while Foster is so well known for her blues, on this album she takes a few different musical journeys and they all seem to be rewarding so far.
What is an Ozzy Osbourne song doing on the album? War Pigs follows and Foster has a field day interpreting the number. She uses some heavy percussion and some very cool harp from Simon Wallace. Foster even plays some dobro to give it a different flavor. Fascinating version of the song.
Next up is Loving You Is Sweeter Than Ever by Ivy Jo Hunter and Stevie Wonder. I remember Levi Stubbs’ taking the lead on this song back in the mid-60’s, and while it’s been covered a few times since then by some great artists, Foster’s version is lilting and angelic, and the use of the backing vocalists gives it a soulful gospel touch. I love this version so much.
Mississippi John Hurt’s Richland Woman Blues follows with some old-school picking including Foster on dobro and Warren Hood on both fiddle and mandolin. Upright bass and spoons add to the rhythm section and this is a great song for the fans of the early blues. Heck, it’s a great song for any blues fan period.
Next up is Abraham, a languid number that floats along. Foster takes her time and just lets the song develop on its own. It doesn’t need to be rushed, it doesn’t need to be explosive, it just needs to be played and listened to. Foster uses her vocals to supply all the power that the song needs. Very nice.
Foster closes out the album with Forgiven. Strings and piano open the number before Foster’s vocals enter and complete the melancholy mood. As she forgives whomever is on the other end of the conversation, you know she is putting those past hurts behind her and moving on with her life. It’s not easy, and it might not get a whole lot easier for a while, but you sense she is going to heal and become whole again.
I’ve always loved Ruthie Foster’s voice and welcomed the chance to to experience Joy Comes Back. Her wonderful soul-filled voice can soar like an angel or stay deep, but whatever vocalizations she pulls out, she improves any song just by singing it.
I know that she has spent a lot of time on the road, a difficult task, and I hope she plays somewhere near me in the future as I would dearly love to see her live. If you are not familiar with her work, you have some catching up to do, but trust me, that will be a lot of fun for you. Stop by her website at http://www.ruthiefoster.com/, to read up more about her, find her releases, and check out her touring schedule. It’s well worth the journey.