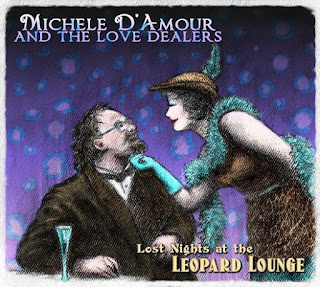 Seattle based Michele D’Amour And The Love Dealers burst on the blues scene back in 2011 and since that time they have been blowing away audiences throughout The Evergreen State and beyond. They have released EPs and full albums and built up a loyal fan base across the country.
It’s obvious that they love the blues, hell, D’Amour wrote her first blues song when she was six years young and has been working on improving her writing and developing her vocals ever since. And don’t expect Michele and the Boys to get into one groove and stay there for an entire show, or even album. No, they like to mix things up a little, sampling different blues styles with equal expertise, and you’re going to enjoy them all.
D’Amour is a prolific songwriter and wrote ten of the twelve tracks solo, and the remaining two, she co-wrote with Cory Wilds. She also handled all of the lead vocals and some of the backing vocals. She is joined by Patrick McDanel on bass, trombone, and backing vocals; Ryan Higgins on guitar and trumpet; and Ronnie Bishop on drums for five tracks, and Rick Bowen on drums for the remaining seven tracks.
The album swings into action with the opening number, No Good. D’Amour has a good voice, she’s only using a slight edge on this number, but when she holds a note, watch out, she’s got some power. This is a promising start and I think this album just might turn out to be a good one.
The follow up song, Trouble, is a slower number and D’Amour is in fine voice. She blends her blues with a jazz vibe and sounds amazing. I would love to see them play this one live as she opens up and you can really feel her emotions delivered in every note.
The sort of title track, Leopard Lounge, is next. It’s a wild number and anyone who has been a working musician has played in clubs like this. D’Amour adds a nice touch of humor to the song and Higgins gets his guitar singing on the break. This is a fun song.
After that foray into the world of wild clubs, D’Amour and the boys have some fun with the funky blues tune, Move On Down The Line. She has a cool edge on her voice for this song and this would be perfectly at home as a STAX song from the early ‘70’s. Blues purists may not gravitate to it right away, but I really like it a lot.
The rhythm section gets a real workout on Lost My Mojo. This is the kind of song that is almost guaranteed to get an audience up on its feet and out on the dance floor. While some folks might not rush to put that on their playlist, it’s a cool song and it gives you a hint at the high energy performance that will be waiting for you when you catch the band live.
While I think the title of the next song, All I Do Is Work, is a perfect description, my wife would surely disagree. This is a slow, smoldering number that really shows D’Amour’s vocal strength. I’m pretty sure I’ll be spinning this one on Time For The Blues before long.
Things get swinging and funky on When The Blues Come Calling. Bowen does some great percussion on the song, it almost seems like he’s drumming with three hands at times. Higgins has a great guitar lead and the lyrics are tight. It’s a quick song and a strong one as well.
I Didn’t Know starts out with a large sound, it’s almost like they aren’t a four-piece band at this point, but it’s because of D’Amour’s great voice and some serious tight bass lines from McDanel. The band is rocking hard on this number and firing on all cylinders.
D’Amour and The Love Dealers get silky smooth for Blue As Blue Can Get. She borders on the jazzy chanteuse and this just might be my favorite song on the album. Her lyrics are solid, the guitar break exceptional, and the overall mood is one of quiet resignation. Love this tune.
She gets back to rocking on What The Cat Dragged In. Her lyrics are pure blues, and her delivery is on point. It’s a cool number. She follows up with a psychedelic blues tune, Last Man Standing, that smokes and sounds like some of the great ‘60’s numbers that first experimented with the combining of the two genres.
You might think that’s the end of the album, but the band has one more up their sleeve with Black Cat Boogie. They show they’ve got some serious jazz combo chops. This has got to be a signature song for them, they do it so well.
Michele D’Amour And The Love Dealers have got a sweet sound. Scratch that, they have several sweet sounds. They can rock with the best of them and then turn around with a lovely jazz sound, then get funky and lay down some tight dance tunes. I have the feeling that they can handle even more styles, but they still have the blues at their roots.


I don’t know how much they travel outside of Seattle or The Pacific Northwest, but if they come anywhere near you, be sure to check them out. You can find Lost Nights At The Leopard Lounge at the usual sites, as well as their website, https://www.micheledamourandthelovedealers.com/, where you can also check out their travel literary.
Posted by John at 12:00 AM