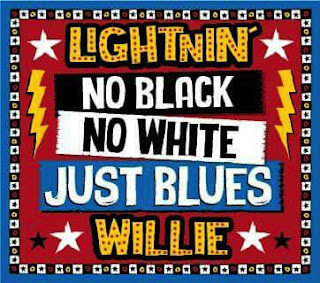 You have to love an artist that has remarkable style, and Lightnin’ Willie has style in spades. Check out a picture of him sometime, this is a guy who rocks his outfits the way he rocks his guitar.
But there are those that are all style and no substance and that ain’t Willie brothers and sisters. This man plays hard, loves his blues, and will do what it takes to make an audience get up and shake a little on the dance floor.
On his latest Little Dog Records album, No Black No White Just Blues, Willie explores themes of loss and heartache, mostly with some kick ass beats and good lyrics. He wrote all of the ten songs on the album and that infuses the entire disc with his distinctive personality.
Lightnin’ Willie handles the guitars and vocals, and he’s joined by Producer Pete Anderson on bass and harmonica; Michael Murphy on piano and organ; Skip Edwards on Hammond B3 and accordion; Dona Oxford on piano; Jesper Kristensen and Jerry Olsen on drums; Ron Dziubla on sax and Luke Miller on strings on Thinking Of You.
The album kicks off with the rollicking Can’t Get That Stuff. It’s got a good boogie rhythm, and Willie’s gruff voice growls his way through the song. It’s a good indication that we’re going to have some fun with the disc. I’m not sure who is banging the keys, but they turn the song into roadhouse bliss and Willie turns his guitar into a weapon of mass rocking!
Next up is Eyes In The Back Of My Head. It’s a darker song of betrayal and it’s still a bouncy number that belies the lyrics. Anderson’s harp adds another layer to the song. This is a very cool song.
The slow, blistering Locked In A Prison follows. Willie’s gruff voice is perfectly suited to this number and the piano work adds great counterpoint to the horns. This is one of those great late night numbers where the singer bares his soul to the audience and this pure blues tune is sure to be a hit.
The next song, Sad ‘N Blue, has some serious blues picking to start things off. The accordion adds a little New Orleans flavor to the proceedings and Willie seems to be having some musical fun, despite the title and lyrics. After that is Note On My Door, and I’m beginning to sense a theme here. It’s a melancholy number dealing with the loss of a love, and Willie and Company use that to create a great blues number.
Heartache starts out with some great funky percussion and organ. It’s sly and the rhythms are impossible to resist. Willie’s break rocks and it’s very easy to lose yourself in the world of the song. The next song, Fuss And Fight, starts out low and slow. The singer is not hiding behind any complicated music – just simple 4/4 beats and an easy rhythm with some cool organ – and opening up all of his emotions.
For the next song, Phone Stopped Ringing, the guitar and organ build a dark background. It’s a heartrending number that touches you quickly and triggers any memories you might have of a similar time. I think it’s a great song and I’m likely to be playing it on Time For The Blues very soon.
The 1950’s influenced Thinking Of You follows, and it’s a good companion to the previous song. It’s a song of remembrance in a good way. Most of the poison seems to have gone out of the singer, and he’s looking back at the good times. I really like this one a lot, and it adds another chapter to the story this album presents.
Lightin’ Willie closes out the album with Shake My Snake. It’s a lightning quick number that is reminiscent of the way groups like ZZ Top attack a song. I’m not going to comment on the possibilities of the title, use your own imagination, but I will tell you this is song is a lot of fun, and I already have plans to incorporate it into an upcoming show.
We started off talking about Lightnin’ Willie’s style, but it is definitely his substance that we take away from this album. He’s a real crowd pleaser and if this album is any indication of what he does at a live performance, he’s got to basically set the house on fire.
No Black No White Just Blues is definitely truth in advertising. The different hues of black and white don’t preclude any of us from having the blues. The musical genre welcomes us, comforts us, and gives voice to the parts of life that trouble us, and somehow it transforms troubles into possible redemption and salvation.
To that end, Lightnin’ Willie is doing what he can to use the blues to make our lives a little better. Check him out at https://www.lightninwillie.com/, to see what else he has to say, and where he might be somewhere down the road.