Johnny Ray Jones ~~ Feet Back In The Door 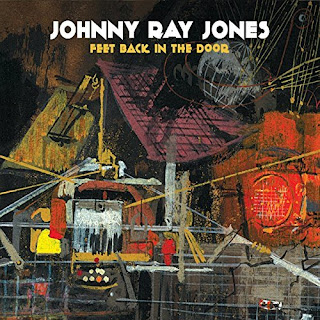 It took a long time for Johnny Ray Jones and his friends to get Feet Back In The Door finished and bring it to market. The process actually started back in 1995 when Jones joined musicians Tony Braunagel, Marty Grebb, Joe Sublett, and Johnny Lee Schell got together, formed a group, and recorded four songs that somehow never got released.
Thankfully the project didn’t just disappear and they were able to complete the album by recording around busy schedules during 2015 and 2016, and now the album is available, and let me tell you, it’s a damn fine album.
I hope you like your blues with a lot of soul, because that’s what this album is all about. Each song draws from Jones’ strengths, and he’s not called “The Godson of Soul” for nothing. But it’s not just Jones. He’s joined by Schell on guitars; Braunagel on drums and percussion; Mike Finnigan on piano and organ; James “Hutch” Hutchinson on bass; and the Texicali Horns which is comprised of Sublett on tenor sax and Darrell Leonard on trumpet.
Special guests on the album include Lenny Castro on percussion; Jimmy Powers on harp; Marty Grebb on piano and baritone sax; Coco Montoya on lead guitar; Lee Thornburg on trumpet and flugelhorn; Paulie Serra on tenor sax; and Julie Delgado, Nita Whitaker, and Teresa James on backing vocals.
Some sweet soul blues opens the album with the title track, Feet Back In The Door. Jones’ voice is silky smooth and the band is on point, especially Finnigan’s keyboards and the Texicali Horns. I always had a soft spot for this kind of great soul music and this is a welcome addition to the genre.
Jones and Company follow up with Hole In Your Soul with guest artist Coco Montoya adding his signature lead guitar licks. It’s a strong song with some very powerful lyrics by Sam Taylor. I’ll be pulling this one out for an upcoming episode of Time For The Blues very soon.
Aside from a parting purr from Mae West in an old movie, Come On Up And See Me Sometime, is a cool as ice throwback number driven by Finnigan’s keys and Hutchinson’s bass. Jones has a seductive voice that is lovely to listen to – smooth but emotive, he pours out his lyrics like a mellow whiskey. This just might become my new go-to late night album to unwind to.
Jones adds some funk to High Cost Of Loving, with the rhythm section holding it together so that Finnigan and the Texacali Horns can add the spice. Schell adds in a great guitar break. They follow up with Hard Times Won, a solid blues number with a strong punch and Jimmy Powers’ harp. This a great song that should be getting some serious air play.
I remember the J. Geils Band performing Love-Itis back in the ‘70’s. It was good to hear Jones give it a little facelift. The horns are in rare form, and Jones sings the entire song with a smile on his face. Teresa James adds her magic to the backing vocals. I really think she’s an emerging star in the blues world and blending her voice with Jones makes a great sound.
Next up is a great blues song, I’m A Blues Man, that calls on so many of the great artists and lyrics from the past. This is that amazing Chicago sound that just electrifies a soul. I could easily listen to an entire album of songs like this, but Jones likes to mix things up. Still, he’s a great interpreter of the blues, and this long-delayed album could easily end up on a lot of best of 2017 lists…
Allen Toussaint’s A Certain Girl follows with that New Orleans swing. It’s a fun song with a little call and response between Jones and Johnny Lee Schell. Joe Sublett’s sax ties it all together and gives it even more punch.
Jones wrote the next song, In The Heart Of The City, and it stands up well against the others. It’s a low, tender ballad that showcases his voice at its most soulful. The song is full of emotion and one of those that get inside your heart for a while.
They end the album with Leon Russell’s Hearts Have Turned To Stone. It features some great piano work from Finnigan – always one of Russell’s trademarks – and the song has a strong backbone. This is a surprising number and perfectly delivered. It’s a great way to end the album.
My one regret with Feet Back In The Door is that it’s taken so long to get it finished and released. But trust me, it was worth the wait. Johnny Ray Jones has a killer voice and he and his friends have produced an album that features so many enjoyable blues and soul styles.
What holds it all together is not just the power of Jones’ voice – although that is a major factor – it’s the respect that Jones and all of the musicians have for the music. There are a number of artists right now who dabble in the blues, or maybe touch on a little soul, but it’s obvious that the music is deeply ingrained in Jones’ DNA. Maybe even an extra-soul chromosome floating around in there.
Check him out when you can. Put him on your radar. You can find his little corner of the world wide web at http://johnnyrayjones.com/, where you can sample his music and check out tour dates. If you do catch him live, please send us a report. I would love to hear about his shows!