Greg Sover ~~ Songs Of A Renegade 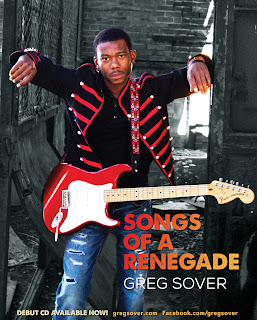 Philadelphia is known for so many things in our country’s history. It’s also been the birthplace of some of the best rock and soul around. Add in cheesesteaks, pretzels, and all of those Rocky movies, and you’ve got a helluva town.
Now it has one more thing of which to be proud, Greg Sover, a very cool rock-blues musician who released his first album, Songs Of A Renegade, on the Grounded Soul label in late 2016 and it’s just reached my desk.
From the sound of the album, Sover seems poised to expand his horizons and create new fans all over the globe. He’s got the potential to do it as well, if these ten tracks are any indication. Sover has only one cover one the album, Bill Withers’ Ain’t No Sunshine, and he wrote all the rest.
The musicians on the album include Sover on lead, Resonator, and acoustic guitars and lead vocals; Garry Lee on bass, percussion, and backing vocals; Allen James on electric guitar; Tom Walling on drums; and Wally Smith on keyboards. If you recognize the names of Lee, James, and Walling, give yourself a no-prize as they form the nucleus of Deb Callahan’s band. As Callahan also hails from Philadelphia, it only stands to reason that these in demand musicians might spread their talent around.
Special guest musicians include François Zayas adding percussion to Cherie and Matt Kallend playing tambourine on After Me. There is also a percussion circle on Preacher that is comprised of Jim Hamilton, Greg Sover, and Garry Lee.
Some sweet guitar and chimes open the album on Moment. Right away, Sover’s approach is different, there’s almost a mellow rock vibe but with prog rock lyrics. I could see this one getting decent airplay on the rock stations and the album sounds very promising so far.
He follows up with the harder rocking number, Heroes. His guitar is choppy and carries much of the song and his vocals are solid but don’t carry the edge that one might expect. I like the surprise, Sover is not an artist you can immediately put a label on. However, his guitar breaks are immaculate.
The next song, Preacher, opens up with some very cool guitar and percussion. This one is closer to blues territory, although it’s still very much a Sover hybrid, with some rock mixed in. It’s difficult to escape other influences, especially in a rock and soul driven area such as Philadelphia. For artists like Sover, it’s the mix that is natural and exciting. It’s a very interesting song.
The follow up, Quicksand, starts out with mellower music, but the lyrics are amazing. Confronting the feelings of addiction with this language is very strong. Almost all of us face addictions – not just the evil ones, there are addictions to people and to the way they react to us. But one must be careful of any addiction, no matter how good we think it might be.
Sover slows things down for (Make Me) Say Yeah. This is a pop flavored number that sounded like a cool throwback to the sounds of the ‘60’s. Not the psychedelic sounds, but the kind of songs you might hear on your local AM station. Those were good musical times, and this song would have been right at home there.
The next track, After Me, utilizes Sover’s Resonator guitar and it gives the song that down-home front porch sound. This is a pretty cool blues song that really delivers. I hope this one gets some airplay, I like it a lot.
With a title like Déjà Vu, it’s easy to see why he took it in a more prog rock direction. Sover’s lyrics are very good and this one is definitely for the rock fans. Bill Withers’ classic, Ain’t No Sunshine, follows and Sover puts his stamp on it. His voice is among the best that it’s been on the album and his band is very tight.
Next up is Superman. It’s a little rock number dedicated to the Man Of Steel. It’s an interesting examination, especially in this day and age where every other movie seems to be a superhero comic book flick. I don’t know that I’ve ever heard someone explore it from behind Superman’s blue eyes before.
Sover closes the album with Cherie. This one is reggae-fueled and is fairly unique even on this album of surprises. Sover and company handle it very well and it’s a pleasant number to listen to.
Songs Of A Renegade is a fascinating collection of an artist who is just beginning to emerge and refine his sound. At this stage in his career, I think it’s a good thing to see where his talents might lie, and he seems very comfortable in the rock blues arena. But Cherie was a very pleasant surprise.
Greg Sover is a very talented man whose star should continue to rise. He’s a damn fine guitarist, has got some songwriting chops, and delivers his vocals with strength, power, and occasional smoothness. And most importantly, he’s not afraid to experiment with his sound while he continues to grow as an artist.


I checked out his website, https://www.gregsover.com/, trying to scope out some background information and to see where he’s going to be playing. Right now, he doesn’t have much listed for live shows, but I’m hoping that will change once the word starts to get out about this album. You can sample a song or two from the album at the website to see if it grabs you, and I’m putting him on my radar to keep an eye on for the future.
Posted by John at 12:00 AM