Dry River ~~ Prayin’ For The Rain 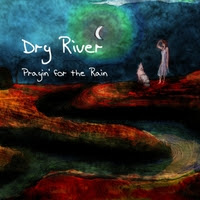 Geologically speaking, a “dry river” is a valley, gulley, or a streambed that only holds water during the rainy season. They are most common in Asia, Africa, or other desert environments. In Southern California, the Santa Anna River would be a dry river except for the runoff water the city runs through it dividing the city into two separate areas.
Musically speaking, Dry River is a band that comes from both sides of the Santa Anna River and create a wonderful blues roots sound. Their latest album is 2016’s Prayin’ For The Rain, an independent release that has just made its way to my desk.
The four-person band includes Oliver Althoen on guitar and vocals; Dave Forrest on harmonica; Joel Helin on bass and backing vocals; and Ruben Ordiano on drums. Guest musicians featured are Paula Gabriel on backing vocals; Satch Purcell on tablas; and Jeremy Hatch on keyboards.
Althoen is the primary songwriter on the album, writing twelve of the songs and co-writing the other two: one with Sinda Althoen and one with Dave Forrest.
The album starts off with Lift This Stone, a swampy number that features Althoen’s guitar and vocals and Forrest’s plaintive harp. It’s a lonely feeling song with gospel roots that’s slow and powerful. Good opening, unfortunately I won’t be able to play it on the radio due to the use of a common expletive. Doesn’t mean I like the song any less, just got to jump through those FCC hoops…
Next up is Dry River Blues, a rocking song that picks up the pace and gives the album a different feel. Two songs, two distinctly different sounds, the band probably has a few other tricks up their collective sleeves.
They follow up with Lost In The World, another song with a solid rocking beat. Helin’s bass gives the song its backbone and Forrest’s harp is sharp and adds a whole new level to the song.
There’s a old-school country blues vibe to the next song, Breakfast, with Forrest’s harp running wild over acoustic guitar. It’s a fun energetic number that keeps your toes tapping from start to finish.
They go from country roots to a little funky blues on Divided For Love. Dry River has played around with some different styles, but they never stray too far from the blues that form the basis for their sound. They are a lot of fun to listen to, and I would very much like to see them live just to see how they interact with the audience.
A real change of pace follows with the lush Hildegard. It reminded me of the English folk rock artists of the late-60’s early-70’s who blended elevated language with subtle guitar and woodwinds. It’s a lovely song.
Death Comes Knockin’ follows with a heavy blues sound. The song is slow and powerful. Althoen’s vocals are among the best on the album and Forrest’s distant pleading guitar is sentimental and emotionally evocative. This is a great song that I could hear so many of the greats singing. Can’t wait to share it with our audience!
They follow up with Free Man, which has a similar feel as Hildegard, but actually veers more into country and away from the English folk. It’s still a lovely song, but probably not one that the blues purists would gravitate towards – but that’s not the audience they are looking for. I enjoyed the song and will add it to my playlist.
Next up is Lovesick Blues and it’s a kicking song. They rock the blues on the song! Althoen plays some cool guitar and Forrest has a blast with the harp. Yeah, this one is going to get some airplay.
The next song is low and slow and deeply moving. Lay Down And Die doesn’t pull any punches lyrically or musically. It’s powerful and very emotional and pure blues from beginning to end. Give it a listen and see if you are as moved as I was…
Next up is some more old-school sounds on Makin’ Biscuits. Yes it’s got a country feel to it and Forrest’s harp gets a good workout while creating the mood of the song. It’s a cool instrumental that offers a call and response between the instruments, primarily guitar and harp.
Shine Your Light On Me mixes more of the folk sound with blues. It’s more of a blues mood than utilizing any of the elements usually associated with the genre. Although Forrest’s harp is, as always, a nice touch and there are some good harmony vocals. Sweet song.
The next song, Tryin’, however, starts rocking on the first note! It’s a quick number and really keeps things moving. Yeah, once again I get to comment that Forrest plays a wicked harp…
They close out the album with Who Am I. It’s a gentle introspective song that shows that the band may move around from genre to genre, but their lyrics are always intelligent and poetic. They are not locked into just one sound, but find different ways to showcase their talents.
Dry River is a very good band who has already released three albums. Prayin’ For The Rain is the only one I’ve had the opportunity to check out, but I’m impressed enough that I will be hunting down their others.


Be sure to check them out at https://dryrivermusic.wordpress.com/ to get a sample of their work, find their CDs, or see where they’re going to be playing next. I don’t know that I’ll catch them live any time soon being on the other side of the country, but any of my California readers that might catch them, please send me a review!
Posted by John at 10:51 PM