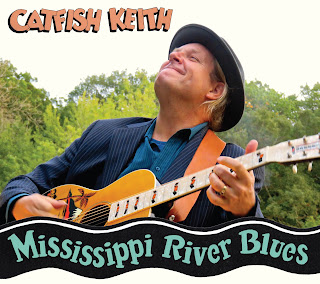 I listen to a lot of music, much of it is not something I care to write about, but every so often the universe rewards me with a new album from a favorite performer. Today the mail arrived and I say the familiar Fish Tail Records logo which can only mean one thing – a new album from Catfish Keith.
Catfish Keith is the foremost proponent of old style music. He’s one man with a whole barnful of guitars and he plays music the way it was from the turn of the century on. I think I know a little bit about that style of music, but Keith is a walking, singing, picking encyclopedia of knowledge.
His latest album, number 16, is a great collection of blues, country blues, and even a few surprises. Mississippi River Blues is a wonderful way to spend an evening listening to great music being played by a top notch performer.
The opening track, It Won’t Be Long Now, was originally performed by writer Frank Stokes. Keith may be playing solo, but the sound is rich and the song puts you in a different place – his blues is akin to those that you would hear pre-autotune, pre-war, pre-microphone; just one guy, his instrument, and the ability to entertain. I love this kind of music.
Next up is Blind Willie Johnson’s Just Can’t Keep From Crying, with some great percussion added to his guitar. Keith’s voice is hoarse with emotion and this is one of my favorite songs on the album.
The Mississippi Sheiks recorded the original of Please, Baby. Keith’s vocals are along the lines of a lullaby and his guitar adds a bass line over a waltz. I’m always amazed at the way Keith is able to get such a gorgeous tone from his instruments. It’s so much fun to listen to him.
Catfish Keith then plays an original song, Telling You, Pretty Mama, that was inspired by Blind Blake. He not only keeps the old music alive, he finds new ways to incorporate them into new music. The blues highway has many off-roads, and something for just about everyone.
Johnny Horton’s Sleepy-Eyed John gets the Keith treatment next. It’s a great down home, front porch, rocking chair, rollicking number that makes the most of some good country blues. Back in the day when I was producing family oriented country music shows, I would have loved to have had someone of Keith’s talent play this song on one. Of course, finding another performer that has his talent, drive, and unique ability to entertain, might be a tall challenge.
Next up is a song that might get more airplay in Colorado that anywhere else, Reefer Hound. This one has got some standard blues tropes and Keith’s voice shakes with emotion. It’s a powerful number that uses some serious foot stomps to create the percussion. Very cool number.
The title track follows, Jimmie Rodgers’ Mississippi River Blues. When you read the liner notes, you will discover that there is a deep family connection to the song. It’s a lovely interpretation of the song and a reminder of just how the music used to be. His playing is strong, and his vocals even have the requisite yodeling to make it sound authentic.
J.B. Lenoir’s The Whale Swallowed Jonah follows and Keith sounds like an entire band playing it. He even adds some percussion to the song giving it a striking sound. I first heard the next song, Canción Mixteca, on the soundtrack on Wim Wenders’ great film, Paris, Texas. This instrumental waltz is a haunting number and a great addition to the album. Now I want to go watch the movie again, it’s been too long…
Next is a Catfish Keith original, Jumpin’ Jack Rabbit. Once again it sounds as if he has extra hands playing more than one guitar. It’s a clever song that uses traditional blues approaches to music to create a new-sounding song. It’s a lot of fun.
Mississippi John Hurt’s Candyman follows. One of the best known of the Delta Bluesmen, Hurt first recorded in 1928 before leaving the music business altogether until returning during the blues revival in 1963. This is a sultry version of the song and it sounds like Keith is having a great time singing and picking the song.
Next up is the dark number, Weed. A perfect companion to Reefer Hound, although much more powerful and menacing. He follows up with the far more upbeat Mama Don’t You Sell It, Papa Don’t You Give It Away. It’s a snappy song with some very cool slide to give it a little more pizzazz.
He closes the album with his rendition of Elizabeth Cotton’s Shake Sugaree. I’ve been a fan of Cotton’s ever since I heard her sing Freight Train, and I can be pretty tough on some interpretations. Keith does an admirable job on his version, keeping it close to the original.
This is Catfish Keith’s 16th album and he keeps finding old songs to give them a new recording. He mixes ragtime, country, blues, and indigenous songs to create a gentle but powerful sound. Mississippi River Blues is a most satisfying album and one that I’ll pull out frequently and enjoy.
I will grant you that there are some that will not follow his style. Like I mentioned earlier, the Blues Highway has many connecting roads and everyone has a favorite journey. I hope at some point you just might try a road that isn’t as traveled today as it once was. You just might surprise yourself.
Please do yourself a favor and visit Keith’s little place on the world wide web at http://www.catfishkeith.com/, and pick yourself up a few albums, and check out where you might find him playing live!