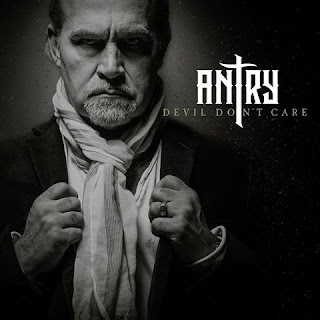 When I first looked at the cover for Antry’s new album, I saw the grizzled visage of Steve Antry looking back at me with the defiant look of an old-time preacher getting ready to wrestle the devil to the ground. That’s appropriate for an album called, Devil Don’t Care, that mixes some beautiful gospel and country flavors in with some very cool blues rock.
Atry has assembled a great group of musicians for his latest effort, including himself on vocals and electric guitar along with Greg Morrow on drums; Michael Rhodes on bass; Rob McNelley, Pat Buchanan, and Brent Mason on electric guitar; Dan Dugmore and Danny Rader on acoustic guitar; Dugmore also plays lap steel guitar; David Smith and Mike Rojas on piano, B3, and keys; Buchanan on harp; and Eric Darkken and Peter Carson on percussion.
Special guests include Shaun Murphy on backing vocals for three songs; Anthony Gomes on guitar for one song; and perhaps the youngest person to ever get a credit mention on an album release, Finn Anderson’s baby laugh appears on one song. And yes, his parents Joe and Liz gave their permission!
The opening number is the title track. Devil Don’t Care delivers a strong hard driving blues rock number with some clever lyrics. It promises that this album is going to be a fun time for blues fans. As Antry uses a number of guitarists, I’m not exactly sure if it’s him or another player who is adding those cool riffs in the song.
Antry and Company slow things down for the next song, Always With Me. It’s a lovely, quiet ballad and it delivers the kind of sentiment that many feel about someone. I know that Antry has a strong country and rock background and claims that he was “raised on gospel,” so it’s safe to assume that his lyrics will reflect that background. This one uses beautifully orchestrated music and spiritual lyrics.
There’s a cool swampy opening to How Far Down, the next track on the album. This is a great country blues number that uses some wild guitar licks to add flavor to a song heavily driven by the rhythm section and keys. Antry’s voice has a fairly impassioned delivery on this song.
The pastime of fishing has great significance in the story song Fishin’. It’s a lovely dreamy remembrance song of memories between a father and son. It doesn’t fall into a blues category, but it’s one of those songs that wrings plenty of emotion from the listener.
Leon Russell’s Prince Of Peace follows. It’s no secret that I am big fan of Russell, so anytime I see one of his songs is being covered, I tend to get excited. Antry and Company pull out their harder rocking roots for their version, and it sounds very good. Very few people can match Russell’s delivery, but that doesn’t matter – Antry is true to the original while putting his own stamp on the song.
He follows the rollicking number with the very quiet Borrowed Angels. Steve Antry sees the spiritual in the everyday and the people that surround us. Perhaps those we know in this life were sent from the universe to watch over us for a time. It has a country flavor and the gentle song serves as a reminder of what might actually be around us at any given time.
Antry returns to two of his favorite subjects, the devil and fishing for Devil Gone Fishin’. It’s a solid blues rocker that serves as a warning for those who otherwise might not be aware. I like what Antry’s done on this album by adding a spiritual component to some catchy and thoughtful music.
The next song, Sending Me Angels, is slow but intense. It’s a good companion piece to Borrowed Angels, but I’m glad he broke them up by putting Devil Gone Fishin’ in between the two. It’s an uplifting thought that there might be angels that are sent to look out for us during difficult times. And who is to say that the strongest angel of all just might be sitting right next to us?
He follows up with the funky gospel number Get Up. This is a cool Delta inspired number that should satisfy just about every blues fan around. This is the kind of song that would not only work in a revival setting, it could easily rock a honkytonk and get hands clapping and heads nodding in approval. I didn’t mention her earlier – shame on me – but the wonderful Shaun Murphy adds some great backing vocals, delivering a fun call and response with Antry.
Antry closes the album with Jimmy Duncan’s Special Angel. It’s a lush number that any fan of the early rock era will recognize the song as a huge hit for Bobby Helms, Bobby Vinton, and Frankie Avalon. Antry’s interpretation gives it a slightly different feel, and it’s lovely to listen to. I’ll be adding this to my private playlist immediately.
There may be some people who are not attracted to the spiritual nature of Antry, but please give this one a listen. Steve Atry has a strong voice and has put together some great musicians on Devil Don’t Care. Much of the blues has been built on a gospel foundation – it’s the music of people who have no place else to turn.
Find out some more about Steve Antry and his background at https://www.antrymusic.com/ and be sure to check out his touring plans. If you can find him playing anywhere near you, make the effort to go and see him. He has a lot to offer to any fan of the roots and blues style of music, and that includes country, rock, and gospel as well!