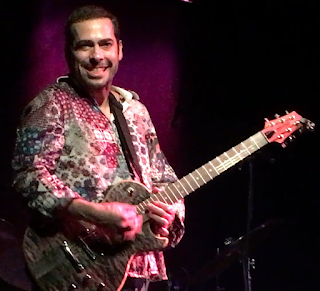 It was a hot day in Richmond and a lot of great blues activity was scheduled for the night. The Camel had Miller And The Other Sinners scheduled from 5-8, The Tin Pan had the rocking sounds of Southside Johnny and the Asbury Jukes on tap, but the big show for me and a number of fans was Albert Castiglia tearing up The Capital Ale House.
Castiglia has been to Richmond a few times before. I remember him appearing at the original Parkfest a number of years ago, as well as him headlining the Brews And Blues Festival at Steam Bell Beer Works this past spring. Turns out he had been here once before when the Capital Ale House first opened.
On that occasion, he and the band had been driving in from Michigan and made it to the venue barely in time to soundcheck and perform. “I showed up looking like a hobo,” he recalled to the audience before starting to play. “Tonight I’m wearing a better shirt so let’s rock!”
Castiglia and his band, which consists of Jimmy Pritchard on bass and Brian Menendez on drums, have such a great sound that it’s hard to believe it’s only three players on stage. With Castiglia’s impassioned playing, it’s easy to understand why he and his band and drawn comparisons to other power trios like Cream and Jimi Hendrix.
While that’s high praise, Castiglia and company have found a way that utilizes their strengths in particular ways. Pritchard and Menendez are both excellent players who use their instruments as a means of conveying the emotion of a song, and not just being content to lay down a groove for Castiglia to play over.
Somehow they manage to create an atmosphere of call and response through their instruments. While the guitar might make a blistering statement, the drum or the bass – sometimes both – will answer with their own statement. The trio makes sure that there is never a dull moment during the performance.
Castiglia opened up with Let The Big Dog Eat from his latest Ruf Records album, Big Dog. The audience was cheering from almost the first note and anytime Castiglia stepped to the center of the stage to lay down an extended run, the audience nearly erupted.
He followed up with Freddie King’s San-Ho-Zay, a great instrumental that rocked the house. I’ve mentioned it before, without downplaying the greatness that is B.B. and Albert, Freddie was always my favorite King. Their rendition was electrifying. After that was another number from the latest album that producer/guitarist Mike Zito wrote for him, Don’t Let Them Fool Ya.
Aside from being an outstanding guitarist and performer himself, Zito has been working with strong musicians to produce their albums. Zito produced Let The Big Dog Eat for Castiglia and is busy producing his next, currently unnamed, album. Zito also produced Virginia artists Anthony Rosano’s recent self-titled release.
After that song, they launched into a great version of Luther Allison’s Drowning At The Bottom. As they were finishing the song, several members of the audience began yelling out requests. Castiglia had a big smile on his face as he turned to the band and asked if they were game to tackle the first request, Somebody Loan Me A Dime. 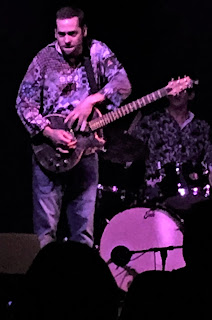 The song, which usually takes somewhere between seven minutes and a week to finish, is a guitarist’s tour de force. But it relies heavily on the rhythm section to match his intensity. Castiglia’s version was a masterclass in entertaining the audience while shredding a guitar. At one point Pritchard took over with an extended bass run and Castiglia hammed it up miming playing his guitar behind his head and with his teeth, all while making the obligatory guitar master’s face…
He followed up with a song written by Brian Stoltz of The Funky Meters, Up All Night, and after a request for his Jimi Hendrix medley, he and the band worked their way through about five songs and included a killer drum solo by Menendez, before ending up with a great version of Hey Joe.
Hard to believe, but he followed that with a request for his tender love ballad, Put Some Stank On It. That one always gets a big response from the audience and last night was no exception. Keeping with that particular mood, the next song was What Was I Thinking.
Calls for Freebird and Elvis Tributes were met with a joke call from Castiglia for the club’s security. While everybody was having a good time, it was plain that the band was enjoying the challenge of thinking on their feet. The crowd was loud but respectful and I would hazard a guess that over half of the audience were friends of Castilia’s.
A call for House Of The Rising Sun was met with a response that, “We have to play a few more up songs before bringing everybody down.” He did this by ripping through Living The Dream and Keep You Around Too Long before delivering a blistering version of House.
Speaking of House Of The Rising Sun, let me climb up on my soapbox for a second. The original lyrics of the song refer to a young woman whose life was ruined by her work at the infamous house. Fellas, it’s okay to sing the song with those lyrics, it worked for the likes of Woody Guthrie among others, so it should be okay for you.
After that he got a surprise request for Keep On Keepin’ On and he delivered it with style. He ended up the show with a song he wrote for a young artist who expected to be famous within six months of starting his career, Get Your Ass In The Van.
Truer words were never spoken. You want to get ahead in the music business, stop complaining and get in the van and get to a place to play. For an encore, they turned loose with a rocking version of Shake Your Money Maker.
Nearly every person stopped by to speak with Castiglia for a few seconds before going on their way on a hot Richmond night. It was a great evening for blues in the Capital City and any audience members who were not already fans became screaming fanatics by the end of the night.
Let’s hope that Castiglia will return soon and deliver another great show when the new album drops in September. Keep watching his website, http://albertcastiglia.net/ to see when you can preorder the album and check his touring schedule. If he comes anywhere near you, get your tickets early and have a good time.
Castiglia also took the time to conduct an interview with me prior to the show, and I’ll be transcribing and posting it shortly. So come on back and keep your eyes open.


(All photos by the Amazing Anita Schlank and are used with permission.)
Posted by John at 7:17 PM