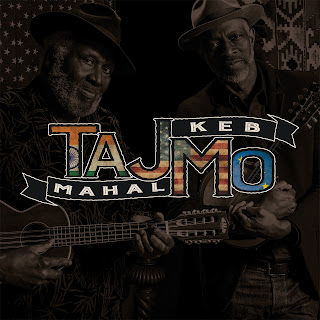 It’s been a good year for top artists to combine their talents on a collaboration project. Earlier I wrote about John Primer and Bob Corritore teaming up as well as Guy Davis and Fabrizio Poggi performing a celebration of the work of Sonny Terry and Brownie McGhee.
Now it’s time to put the duo of Taj Mahal and Keb’ Mo’ on that list with their newest album, Tajmo. It’s available now on the Concord label, and let me tell you, it’s a great disc. I actually got a couple of songs on satellite radio and ran out to buy a copy. I wasn’t disappointed by a single song, even when they stepped outside their blues comfort zone.
Of course, these guys have been making music for so long, their comfort zone has got to be pretty wide.
They had a number of their friends join them as special guests here and there and worked with some other top flight artists.
The opening few bars of Don’t Leave Me Here announces in no uncertain terms that this is a blues collection by top bluesmen and women. It’s a great song that features Billy Branch’s unmistakable harp and each man taking turns on the vocals. The song was written by the two artists plus Gary Nicholson, who is no slouch himself in the writing department. Love this song, and I have a feeling that this one and several others are going to be showing up on Time For The Blues!
They follow up with an essential song in the history of rock ‘n’ roll, She Knows How To Rock Me. The song was written by William Lee Perryman, better known as Piano Red as well as Dr. Feelgood and was originally recorded by the legendary Carl Perkins. Keb’ Mo’s Resonator guitar gives the song a pure swamp blues feel and the trade of the vocals gives the song a solid backbone. This is one of my favorites on the album (okay, I’m a little prejudiced because I always thought this was a great song).
More guests come out to support the next song, All Around The World, including Colin Linden on mandolin and Sheila E on percussion. It’s a jazzy number and a little more lighthearted than its predecessors. It’s got more of a pop sound and is accessible enough for most radio stations to play. 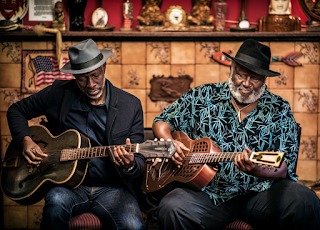 Om Sweet Om features Joe Walsh on guitar, Lee Oskar on harp, and especially Lizz Wright joining Keb Mo’ and Taj Mahal on vocals. It’s a slower quieter number with some nice poetry in the lyrics. It’s a bit of a departure from some of the music they’ve done, but the lazy Americana feel of Oskar’s harp makes it a delight to listen to. Perfect for a summer day…
There’s a bit of rocking in the blues of Shake Me In Your Arms. I love the interplay of the vocals by Mahal and Mo’ and it’s a tight number. Joe Walsh is playing some guitar (including a sweet lead break) and the horns add a cool touch. Can’t go wrong with Phil Madeira’s B3 playing. It all has that cool STAX soul sound. It does break down into more of a jazz number for the last couple of minutes of the song.
There’s some nice slide guitar by Keb’ Mo’ on That’s Who I Am, and the song is a nice blend of pop mixed in with the blues. There are some good country touches, mainly Colin Linden on mandolin and the Mahal and Mo’ trading licks on Resonator guitars.
Sleepy John Estes’ Diving Duck Blues follows, featuring just the two of them on guitars and vocals. It’s a faithful rendition of the number and a welcome addition to the country blues sound. I’ve heard this one pop up on a couple of shows already, and once you hear it, you can understand why. I like this one a lot.
In a surprise song, Pete Townshend’s Squeeze Box, which was originally on The Who By Numbers back in the mid-70’s and covered by Poison, turns up next. Somehow they make it sound like The Who doing some swamp rock. Leave it to Mahal and Mo’ to add two accordions to the song and some very cool Zydeco runs. It’s a fun song.
Ain’t Nobody Talkin’ follows that with an R&B groove. This one will satisfy blues fans – it’s dark and mysterious and the percussion keeps things moving along. The horns add their special touch and the interplay between the B3 and the guitar is very nice. Good song.
As you can guess from a title like Soul, the song might fall into a specific genre. But you know, no genre or group of people have an exclusive on soul. Here, Mahal and Mo’ give us a Caribbean riff that mixes in a number of different instruments (banjo, ukulele, horns, and a myriad of percussion) to create a unique sound. I like it, although I probably won’t be able to slide it into my blues program. Fortunately, I share an office with the man who helms a world music show, and I can bet you I can convince him to give it a spin or two…
The album comes to a close with Waiting On The World To Change. The special guest on this number is Bonnie Raitt on backing vocals, and the three of them perform the entirety of the short song. It’s got a little social commentary to go with a sweet melody. The song was written by John Mayer and it serves that we’re still waiting.
You can find out a lot more about this collaborative album at its own website, https://tajmo.com/, but don’t stop there; be sure to visit the websites of the two men who made the album at http://www.tajblues.com/ and http://kebmo.com/home. Check out their rich history of music and what they are doing to move it forward. And they are even teaming up out on the road, so pay special attention to where they are touring – you won’t want to miss that performance!