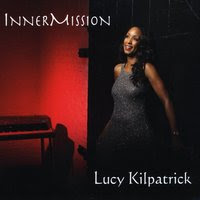 First things to get out of the way, while Lucy Kilpatrick plays some great blues, after all she plays with both the Bobby “BlackHat” Walters Band, and the Tom Euler Band (who recently won the group competition for the River City Blues Society’s Blues Challenge), she is primarily a jazz artist.
To add to the confusion, I first met her when we were both working for country artist and Broadway actress Julie Johnson. Truth is, I’ve heard Kilpatrick play just about every genre of music under the sun with the possible exception of heavy metal. And I bet she could rock out with the best of them if she had too…
But her most recent album, InnerMission, which came out in 2015, is pure jazz. Sitting behind her electric piano she unleashes some of the best instrumental jazz that has come across my desk in a long time. Normally I defer to my friend Peter Solomon who is WCVE-FM’s daily jazz host, as I think he is very knowledgeable about this great form of music, but heck, Kilpatrick sent her CD to me, so I’m going to write it up for my blog.
So, if you are looking for a blues fix, come back tomorrow when I should have something for you, but if you are an adventurous soul who likes their jazz on the mellow side, stick around, let’s have some fun.
Kilpatrick shares her musical journey with us and uses some great musicians to help her find her vision. Aside from Kilpatrick on the keys, she is joined by Jason Jenkins, Lefty Handsbury, and Juan Nelson on bass; Kevin Gaines and Brian Johnson on drums; Lance Koelher on tambourine; and Keith Anderson on sax.
Kilpatrick starts the album with her version of Billy Joel’s And So It Goes. It’s low and sweet with several nice piano fills. She has a ton of soul in her heart and it comes through on the notes. The rest of the combo comes in after she’s established the mood. Nice opening.
After that she tackles Hip Hug Her, a song made famous by Booker T & The MG’s. Here Kilpatrick is able to unleash her inner STAX funk girl as she whips through the song with plenty of soul and verve. This could easily have been a part of that great label’s releases.
The first of her own releases, Just Chillin’, follows. It’s not atypical of Kilpatrick to open up with great covers before stepping out with one of her own songs. Check the title, that pretty much gives it away, it’s a very mellow number so just kick back and enjoy…
Vince Youngman’s It’s Gonna Be A Great Day is next and it’s a great mellow follow up to the previous song. Taken together they make for a nice pleasant interlude.
Kilpatrick follows up with a medley of Gifts/Higher Ground, one song by her, the other by Stevie Wonder. Not too shabby a collaborator to build upon. Her trio is in good form as they explore the combination, and her song slides nicely into Wonder’s. A lullaby gives way to funk and the songs create a different vibe entirely.
Kilpatrick stays funky with Everyday People Express Themselves. Of course, with songwriters like Sly Stone and Charles Wright, it would hard to be anything else. Sax player Keith Anderson makes his first appearance on the album and it adds to the fun…and the funk!
The second shortest song on the album, Lament For Lola, is next. Clocking in at a mere 2:26, it packs a lot of music into a short space. Kilpatrick plays with great emotion, as much as any singer, and it’s a heartrending song to hear.
The shortest song, Pristine Journey, is next. It’s only 2:20 long and it uses a brisk tempo to create the world of the song. Both of these are written by Kilpatrick and they form a great interlude in the album.
Another Kilpatrick composition, Saturday’s Child, follows. This is a touch of swinging jazz to pick things up after the previous interlude. Anderson’s sax carries much of the song soaring above Kilpatrick’s wicked keys. It’s a fun song and one I would love to play. Maybe someday…
The album closes with my favorite song on the album, Sweet Sweet Spirit, which just features Kilpatrick on piano. It’s a beautiful spiritual number where she connects with that spirit that guides her and interprets those impulses through her fingers. It’s gorgeous and the perfect way to end the album.
If you live in the Central Virginia area and see a jazz show advertised, it’s a pretty good bet that you will find Lucy Kilpatrick there. She is in great demand as a side artist and her playing has complemented many a performer. So many have counted on her confident and strident playing and she’s branched out now into more blues and is reaching a larger audience.
InnerMission is a lovely album, one that I am glad to now own as I will pull it out often while I am working on writing that I perform on a number of subjects. I found myself pulled into her web of music and surrounded by some delightful sounds.
Jazz fans, especially those who are mellow jazz fans, should get a copy for their collection. You can find out more about her at her website, https://lucykilpatrick.com/, and I hope you check her out soon. And look for me somewhere in the first couple of rows, I don’t like to miss her shows…