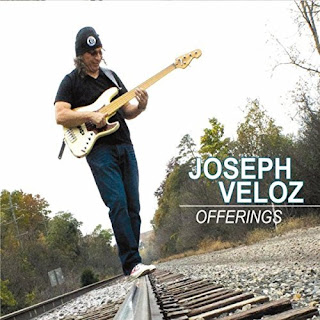 Joseph Veloz is a renaissance bassist. I don’t mean that he plays the bass like it’s the 14th Century, I mean he is adaptable to so many different styles. He seems just at home with jazz as he does the blues, and if you want to toss in soul, funk, or Americana, Veloz is cool with it.
He has played with and supported a lot of great acts including Matt "Guitar" Murphy, Lucky Peterson, Joanne Shaw Taylor, Shawn Kellerman, Eddie Kirkland, James Armstrong, Sherman Robertson, Debra Coleman, Jason Ricci, Carl Weathersby, Greg Nagy, and Drew Abbott. There are a lotmore names I could add, but you get the idea. Veloz is no lightweight performer, he’s in demand for session work as well as tours.
With his first album, Offerings, he finally places himself a little closer to the spotlight. Like the supportive man that he is, he still manages to put that light on some of his friends and fellow musicians while he adds his excellent bass to their performance.
Veloz has recruited some well-known vocalists to get behind the mic and he’s also written some beautiful instrumentals to showcase some of his guitar and keyboard friends as well.
The vocalists on the album include Biscuit Miler on Good Good Day; Lucky Peterson on Jukin’ And Shakin’; Greg Nagy on I Like Me Better When I’m With You; Jennifer Westwood on Jolene; and Joey Spina on Kiss.
Other musicians include Veloz on bass; Jim Alfredson and Jim David on keys; Shawn Kellerman, Dylan Dunbar, Erich Goebel, and Greg Nagy on guitars; John Lee on piano; Ray Podhornik on trumpet, David Rodenburg on sax; Andrew “Blaze” Thomas and Scott Veenstra on drums; and the backing vocals of Le Chœur des Offrandes which is made up of Jim Alfredson, Andrew “Blaze” Thomas, Shawn Kellerman, and Veloz.
The album kicks off with the jazzy instrumental Just Jammin’. Veloz is so comfortable in different arenas and this catchy number lays out much of his musical philosophy – his ability to elevate and showcase other musicians and his desire to show that the blues don’t belong in a museum, that it can continue to grow in different directions.
The award-winning Biscuit Miller takes the vocals on Good Good Day. This song is straight up blues and Miller is in good form. This is the song that features the guys providing the backing vocals and it sounds like they had a lot of fun doing it.
If you are a jazz musician, it would be hard not to be inspired by the great Miles Davis. The next song, Mules For Biles (Blues For Miles), is a lovely jazz instrumental. Alfredson does a remarkable job on the keys. This may be my favorite song on the album, and I will have to pass it along to our jazz host so that he can share it with his audience.
Jukin’ And Shakin’ showcases the vocals of Lucky Peterson. I always enjoy Peterson and realize it’s been too long since I featured him on Time For The Blues. This will be a great song to play to show off the talents of both men. It’s a seriously cool blues song in the Chicago style and there’s enough energy generated from it to light up the entire West Side!
Veloz feels the spirit that guides the universe in everything he does. The next instrumental, He Loves Me (God’s Promise), taps into that belief. It’s a lovely song that explores wonderment, joy, and the peaceful feelings that faith can bring to a person who is open to those gifts.
Greg Nagy handles both the guitar and vocals for I Like Me Better When I’m With You. That’s a title with which many of us can identify. Nagy has a great soul voice and it’s put to the test here. This is a fun song and it adds a lot to the album.
Friend and bandmate Jennifer Westwood delivers the vocals on Dolly Parton’s Jolene, and delivers a beautiful blend of Country and the Blues. Of the songs that include vocals, this is my favorite, and the use of a female singer makes this song stand out. It’s a familiar tune but Veloz and Company make it seem original.
Prince’s Kiss, as delivered by Joey Spina, closes out the album. Since his passing, a lot of blues musicians have been covering some of his better known songs. At their heart, many of Prince’s best works were blues songs, and these new interpretations really bear that out. This version retains the soul and funk elements and adds a few twists and turns of their own.
Joseph Veloz is a great bass player and if this album is any indication, a very strong songwriter as well. I don’t know if this album will lead to more or if Veloz will continue to focus on his side work or his teaching. Offerings is a solid addition to the blues-jazz genre and for those of us who get excited by this form a music, a must have for our libraries.
Check him out for yourself. You can find his corner of cyberspace at http://jmveloz.com/, and you can read his fascinating biography, hear some samples of his music and even order this one.


If you can catch him live, grab the chance. I am pretty sure you won’t be disappointed by whatever direction he is headed at the time!
Posted by John at 6:56 PM