For Richmond blues fans, summer doesn’t begin until the Blues Challenge is presented by the River City Blues Society. This year, the competition Celebration will take place at the Capital Ale House Downtown on Sunday, June 11 and will run from 1-6 p.m.
Greg Willard, the man behind the Blues Challenge for the past 12 years promises that this year’s show is going to be great. So far, the entrants include at least two previous winners, and several challengers that could easily take the top prize.
Willard, one of the hardest working men in the blues community, has been involved in all of the Blues Challenges, being a member of the first band to win the challenge, then he has served as the coordinator of the event ever since.
**Local Blues Trivia** Do you know the name of that band? The answer appears at the end of this article.
The Blues Challenge is a fairly big deal as the winners of the event will get an automatic opportunity to compete in the International Blues Challenge in Memphis in late January. There are two categories for the competition: solo/duo and band or group. There is an additional category for youth performers, but I don’t believe we will have any this year.
In the solo/duo category, there are three acts vying for that berth to Memphis: Root2 Music, Parker and Gray, and Markiss Blowfish. A previous winner in this category, Root2 Music is comprised of David Frank on guitar, harmonica, and vocals, and Nancy Reid on fiddle and vocals. They have a unique sound that blends original and traditional blues and Celtic Appalachian tunes.
Parker and Gray is a duo that utilizes guitar, harp, and a wicked looking tub bass to create their sound. They are an acoustic blues, folk, and soul band that I will confess to not having seen before which adds a little more excitement to the proceedings.
Markiss Blowfish is a man who joined the church of the blues later in his life after he had gathered a multitude of experiences. He works in the country blues vein and appears regularly around Richmond. I had a copy of his CD in my files, but it looks like it grew a pair of legs and walked away. Guess I’ll be picking up a new copy of it on Sunday and I hope to latch onto one from Parker and Gray as well. 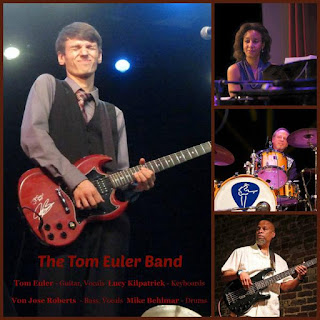 The group category is going to be extra tough this year. Already confirmed are: Tom Euler Band, The Brothers Hoodoo, and In Layman Terms. I am friends with Tom Euler (and especially with his keyboardist, Lucy Lawrence Kilpatrick, with whom I used to work some time ago on other projects) and The Laymans, and I’ve heard nothing but good things about The Brothers Hoodoo.
These three bands are going to bring a lot of energy to the show, I’m already anticipating the dueling guitars between Tom Euler and Cole Layman.
The Brothers Hoodoo have only been playing together for about a year, but they have already carved out a good reputation and they have a raucous approach that just might see them upset the favorites.
Plus, there could be more bands that enter. The deadline for entering is June 7, 2017 so there just might be some other groups, duos, or solo acts that decide to join in the fun. If you are interested in competing, you better get in touch with Greg Willard PDQ to reserve your slot. He can be reached at gwillard9696@comcast.net.
If you want to come and hear some great music, just come on down to the Capital Ale House Downtown on Sunday, June 11 and present $10 at the door. Bring your appetite and sample some of their adult beverages if you feel so inclined. The judges will be the ones at the long table arguing, and I, your humble narrator, will be the Master of Ceremonies for the day.
You can get even more information from the River City Blues Society website at http://www.rivercityblues.org/.
(The answer to today’s trivia question, What was the name of the band that won the first ever Richmond Blues Challenge? The Phifer Marshall Band.)