The Mark Cameron Band ~~ Live At Blues On The Chippewa 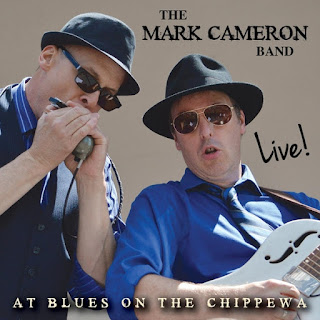 Recorded in August of 2016, and released in time to get ready for the 2017 festival, The Mark Cameron Band has delivered a record of their hot set at the Blues On The Chippewa Festival. For a few days each year, the town of Durand, Wisconsin becomes the blues capital of the world.
For this Cop Records release, Live At Blues On The Chippewa, Cameron has teamed up with Dan “The Hit Man” Schroeder on drums, Scott “Thunder” Lundberg on bass; Bill “Killer” Keyes on harp, and Sheri “Shaker Sheri” Cameron on sax and percussion. The high energy 11-song disc delivers 10 originals and one cover to an extremely appreciative audience.
After some warm applause comes Keyes’ harp kicking off Doctor In The House. The band is ready to have a good time and you can tell that they want the audience to come along with them. Keyes takes a solid harp break before handing off to Cameron on guitar. Damn, this is a great way to kick off a set.
Without even pausing for applause, the band launches into Somewhere Down The Line. Lundberg lays down a funky bass line and his rhythm section partner Schroeder answers with some cool drums. Cameron takes a couple of seconds to introduce the band members and the audience answers with cheers and applause. Very cool song that lets the band showcase themselves.
They follow up with a dark number that is a lot of fun, Dicey. This is one of those blues numbers of a guy getting caught in several difficult situations, women, money, and other things that are just tricky to escape leads one into dicey moments. The troubles just pile up and just make the listener smile.
Next up is the smoldering Borrowed Time. So slow, so intense, and oh so good. This is one of those late night in the spotlight numbers that relies mainly on the emotion in the singer’s voice. On this track, Cameron’s guitar break offers as much emotion as his vocals. Very sweet song.
There’s an upswing in the tempo on Mood Shuffle, as the song starts off bouncy. Sherri Cameron does a fine job on sax on this number and especially on the previous one. It’s a fun number and one that could just get an audience out of their chairs and onto the dance floor.
No pause before moving on to Hammered By The Blues. Keyes’ harp sets the stage and the band drops the tempo down to let Cameron’s vocals take over. It’s old-school blues and a solid number that could have stood up with the best blues performers of any generation. Cameron’s guitar break is a stone killer.
The only cover on the album is the classic song, Killin’ Floor. The guitar and harp play off each other so well and the rhythm section keeps it tight. Cameron gets a little gritty on his vocals, and this is one of those songs that’s been performed by so many of the greats it’s hard to break new ground, but Cameron and Company do a credible job on it. It’s a good interpretation. It may also include the only egg solo ever recorded…
Playing Rough starts off with some solid blues licks and Keyes’ great harp. Cameron keeps an edge on his vocals and the song drives hard. The group is in top form and they have fun with a couple of breaks. I could have some fun playing this one on Time For The Blues.
Gotta love that steel guitar on Done Me Wrong, it gives the song that down home swampy feeling. Cameron’s voice is in fine form and the harmony from the backing vocals is tight. This is a great song, pure blues with no apologies and the kind of song that should receive a good deal of airplay. I know it will on my show…
No pause and Cameron keeps it going with that steel guitar on Rusty Old Model T. It’s a cool number and Keyes’ harp comes in at just the right moments. Sheri Cameron adds some nice harmony vocals and this could be put up against all the other great American songs about cars. Cars make perfect metaphors for so many things – and people…
Cameron and company bring the album to a close with Back Seat Boogie. Perfect timing, following a song about a car. It’s a swinging number that leaves the audience with a big smile on their faces as they just witnessed a great band deliver the goods.
Live discs can sometimes be tricky. Even with advances in recording techniques, there are often things that can happen and on a live album, once it’s there, it’s there. We’ve all seen those live performances that the artist would rather forget than record, but The Mark Cameron Band was on fire this time, and it’s a good thing they were recording as now, those of us who missed last year’s festival can listen to at least a part of it.


They might not be a household word, yet, but they are a great band with a growing reputation. This is an album that’s going to get them some attention and hopefully even more airplay. Check out The Mark Cameron Band at https://www.markcameronmusic.net/ and see where they’re going to be playing next. And if you want to head to Wisconsin this August to check out Blues On The Chippewa, you can find their corner of the world at https://www.bluesonthechippewa.com/#home1.
Posted by John at 12:00 AM