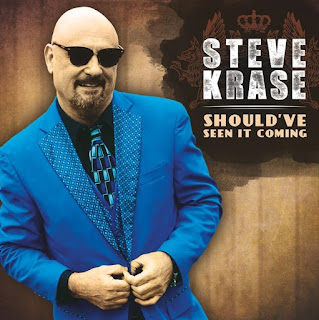 Steve Krase is a cool guy. Aside from being a wicked harp player, he happens to be the man in charge at a rapidly growing blues label, Connor Ray Music. If that wasn’t enough, he was recently a semi-finalist at the International Blues Challenge in Memphis, and he recently dropped a solid album, Should’ve Seen It Coming, on the previously mentioned Connor Ray Music label.
The guy seems to be a perpetual motion blues machine, and our industry is better off for his efforts. I’ve mentioned on a couple of occasions how impressed I am with Connor Ray’s roster and as some point I’m told I can get Krase to sit down for a few minutes and do an interview with me to discuss their start, how he finds new musicians, and where he sees them going in the future.
Until such time as I can secure that, let’s just focus on looking at his latest CD which features a little help from his labelmates Trudy Lynn, Mark May, and Bob Lanza. Aside from their contributions, Krase was joined by Rock Romano on bass and backing vocals; David Carter on guitar and backing vocals; Richard Cholakian on drums; Randy Wall on piano and organ; Alisha Pattillo on sax; and James Gilmore on percussion.
Krase and Company open the album with a deliciously raucous Brand New Thang written by Rock Romano. It’s a party song that signals that this album is designed for a lot of fun. Krase’s harp work is outstanding and he really digs down deep on his break. That’s Mark May playing some killer lead guitar. Great number to start thangs off…
He follows up with a cover of Willie Dixon’s Crazy For My Baby. I love the old-school Chicago sound he uses for this one. Trudy Lynn adds her amazing voice to the backing vocals. Krase pulls out all the stops on his harp break, making it soar and dip. Fun cover and I would love to see it live.
Fats Domino’s classic, Let the Four Winds Blow, is next. This is an over-the-top grade A cover of the song. Recently I’ve heard a few covers of this song and without question this is one of the two best. Krase and company do an outstanding job on it.
The World’s Still In A Tangle is written by Krase and it’s the first slow burn blues number on the album. It takes some of the larger problems facing the world at the moment and reduces them to the personal level. Some of it is for fun, but that just makes it easier to face those more insurmountable obstacles. Listen to that sweet harp that he plays. So good.
He picks up the pace with the rocking song, Shot Of Rhythm And Blues. This is the kind of song that has just got to get the audience out of their seats and onto the dance floor. It’s fun, moves quickly, and leaves a big smile on your face!
Next up is the title track, Should’ve See It Coming, written by his brother David Krase. It’s an unusual song and the vocals sound like they are delivered through his harp mic. It kind of reminds me of some of the 1960’s rock songs that mixed in some jazz with them. It’s growing on me, primarily due to the strength of Krase’s harp.
After that is the upbeat Travelin’ Mood. Well, the music is upbeat anyway, the lyrics are a little on the dark side. The shortest song on the record at just at three minutes, it’s a transition song out of the previous number. It segues into Clarence “Frogman” Henry’s Troubles, Troubles. This one swings and should satisfy just about every blues enthusiast around. I can’t wait to share this one on an episode of Time For The Blues.
Jerry Lightfoot’s Make You Love Me Baby follows. Krase worked alongside Lightfoot for about a decade and this is a fun song to add to proceedings. It’s up tempo and optimistic, and allows plenty of room for the band to stretch out and jam when done live. Here it makes the most of Wall’s piano and Carter’s guitar.
The second song written by David Krase is Repo Man. It’s a jazzy saga of those guys who only come out at night to take back those things we can’t afford. It’s not personal, just business. It’s an interesting song, very dark, and the band seems to have some real fun with the unusual rhythms.
The instrumental Way Back Home follows. I’ve mentioned on more than one occasion how I tend to like instrumentals on an album when they are used to showcase the musicians and give them one last shot in the spotlight. When I first started writing about music in general, and the blues in particular, those instrumentals didn’t seem to pop up very often. Now, it’s much more common to find one on an album. My feelings haven’t changed, and this is a beautiful song that is evocative and introspective. It’s a bold choice to put on near the end of an album, and I am very impressed by it.
The last couple of songs are remixes of the two songs written by his brother David Krase. Nothing is really changed except the lyrics contain a couple of explicit words. So, if you prefer them clean (or want to play them on the radio like I do) use the earlier versions. If not, these are good too.
Krase is one of those guys you want to keep an eye on. He’s constantly moving and shaking and experimenting with new sounds and new people, and doing what he can to bring the blues to a wider audience. You can often hear him lending his not inconsiderable talent to some of his label’s releases, and he’s made sure to showcase some of their work on his release.


Be sure to check him out at both his website http://www.stevekrase.com/ and the label’s website http://www.connorraymusic.com/. If this is your introduction to his work, I think you’ll want to investigate further, and if you find a chance to catch him live, by all means, take it and let me know what kind of a show you saw!
Posted by John at 12:00 AM