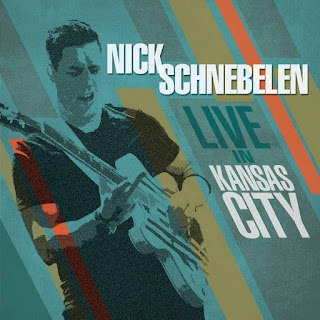 It’s been many years since I was in Kansas City, and I’ve never been to Knuckleheads, although one of my oldest friends practically lives there. I get reports from musician friends who live in the area, and of course I check out who is playing there from time to time. It’s on my bucket list if anyone wants to send me an all-expenses paid trip and toss in some barbecue with it…
Today’s album was actually recorded live in Knuckleheads and features Nick Schnebelen running through a ten-song set to a very enthusiastic audience. Schnebelen is probably best remembered for his work with his sister Danielle and brother Kristopher when they formed the kick ass family group Trampled Under Foot.
Together they toured the world, won awards, and released several great albums. While they have gone on to pursue solo projects (they still get together for reunion shows) they still find time to occasionally write material with one another as they joined forces on three of the songs on this album.
Schnebelen is one helluva guitar player. He can turn six-strings into a weapon and fire it with a ferocity that is unparalleled. He can also drop it into a sweet melody that will leave you humming and tapping your toes. In his hands, the instrument seems to take on a life of its own.
He is joined by bassist Cliff Moore and drummer Adam Hagerman, and somehow these three guys manage to sound like a much larger band. They play with such over the top energy, it’s impossible not to feel like you are right there.
For this latest VizzTone release, Live In Kansas City, Schnebelen has secured one of blues’ best producer, Tony Braunagel, who has worked with just about every big name in the business, including two albums with Trampled Under Foot. They two obviously work well together, and Braunagel is able to spur Schnebelen to higher results.
The crowd is already into it before he starts the first few notes of Fool. There is unmasked power in both his playing and his vocals at the start of the number, and the slow, deliberate pace of the song takes a hold of you (and the audience) and marks this as a very special song.
From there he segues into Pain In My Mind, again taking his time. Schnebelen seems to be more interested in building a show by playing songs that bring the audience in, rather than attack them with pure pyrotechnics. It’s a smart move as his vocals are inviting, his lyrics sharp, and these first couple of songs are great blues tunes. When he takes a turn on the guitar break, he soars and gives the audience a glimpse of his mastery.
Okay, with a cover of Muddy Waters’ Herbert Harper’s Free Press News, I really wasn’t sure what to expect. But this version has a cool drum intro that gives way to Schnebelen’s guitar and some lyrics, that, while written years ago, sound like current events. It turns into a cool number with a different style of drumming that lays down a great beat on which Schnebelen can play against. Great song.
You Call That Love was written by the Schnebelen siblings, and it is a slow, blistering number. Schnebelen unleashes some great guitar licks, but it’s his vocals that command the song. Here, he’s more vulnerable, more open; his emotions are on full display and it’s a great song.
For Bad Woman Blues, the three Schnebelens are joined by producer Braunagel in writing the song. The beat is funky and Schnebelen pulls out a new guitar to give the strings a swampy feel. They should have given Bo Diddley a writing credit for appropriating his famous beat. They make it sound fresh and fun and I know I’ll be playing it on Time For The Blues asap.
Next up is Johnny Winter’s Mean Town Blues. Winter’s approach to guitar seems to be very similar to Schnebelen’s. This is a hard rocking number and the trio seems to be having a lot of fun on this one. It’s a good follow up to the previous song, similar in approach and sound and you can hear the audience’s enthusiasm as each song comes to a close.
Jonny Cheat follows with more rocking blues. This song is pure blues and the band keeps it tight. The lyrics are strong and the rhythm section drives this song for all it’s worth. Great number, another one I really want to share on the show.
The next track, Bad Disposition, showcases Schnebelen’s guitar work. It’s a dark song that gives him a menacing persona. There is an aura of danger to this song, that makes you think that on a hot still night, anything could happen. But damn, those guitar leads are the real killer…
The following song, Schoolnight, has some pointed lyrics and the imagery paints some incredible mental pictures. For blues lovers they will take on a special meaning, and if you’re not a blues fan, they just might explain it to you. Another great song.
The instrumental, Conformity Blues, closes the album. The trio has a fun time adding a little jazz to the proceedings. Schnebelen’s guitar takes much of the spotlight, but he gladly shares it with Moore and Hagerman who have ably backed him up all night.
I think that Live In Kansas City is one of the best albums I’ve encountered this year. Each song was engaging and you can feel how the audience enjoyed every number. Schnebelen’s guitar and vocals were in top form, and the trio didn’t need any other players to improve their sound. They rocked hard, played sweet blues, and earned the respect of every member of the audience.


Be sure to check this one out if you’re a blues lover and I doubt very much that you will be disappointed. While you’re at it, drop by his little corner of the world wide web at https://www.nickschnebelenkc.com/ to order a copy of the CD, or to check and see where he’s going to be playing next. His travels are taking him all over the world, so you just may have a chance to catch him somewhere down the road.

If you want to just jump to a link where you can pick up Live In Kansas City, you can go to: https://lnk.to/nschnebelen and order a copy. And no, I won't see anything from it, so order with confidence!